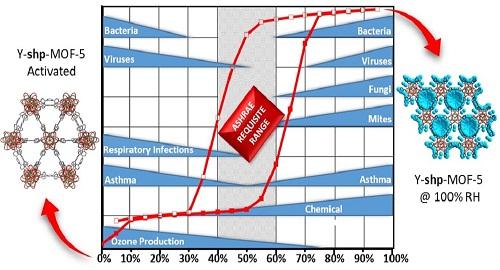 A novel porous material can soak up excessive humidity in a room only to release it again when the humidity falls. Now KAUST researchers have devised a metal-organic framework (MOF) material that monitors its own properties.

MOFs are a class of microporous materials consisting of single metals or metal clusters connected by organic linker molecules. By varying metals and organic linkers, researchers can precisely control the shape, size and functionality of the material's micropore system, which in turn affects the material's capacity for adsorbing certain molecules. Various MOFs have been designed to selectively capture carbon dioxide, for example. Others have been designed to adsorb water vapor.

This new MOF can regulate conditions perfectly within the window of comfortable and healthy humidity levels established by the American Society of Heating, Refrigeration and Air Conditioning Engineers. It could be used to modulate humidity in indoor spaces, aircraft cabins or even space shuttles.

Guided by the MOF design strategies developed at KAUST, Mohamed Eddaoudi and his team in the Advanced Membranes and Porous Materials Center used the molecular building block approach to assemble water-stable Y-shp-MOF-5. This is a highly connected MOF in which rare earth-metal-based clusters are connected by 12 organic linkers.

Remarkably, if the relative humidity dipped below 45%, the MOF released its adsorbed water, which meant it autonomously maintained relative humidity within the comfortable and safe range of 45-65%. It retained this performance even after more than 1000 water vapor adsorption-desorption cycles. "This behavior is unusual for microporous materials," says Youssef Belmabkhout, a senior researcher in Eddaoudi's group.

"The phenomena with water adsorption in Y-shp-MOF-5 are distinctive in nature," AbdulHalim adds. "The key to the material's low water absorption at low relative humidity is its relatively high proportion of hydrophobic organic linkers," she says. "Only at higher water-vapor pressure is the hydrophobicity overcome as water molecules form rapidly growing clusters within the MOF's pores."

"Y-shp-MOF-5's unique behavior puts it at the forefront of energy-efficient technologies for autonomous moisture-control systems in enclosed spaces," says Eddaoudi, who also told us that the team is pursuing the development of new MOFs with similar adsorption-desorption properties, but with superior water-uptake capacity.