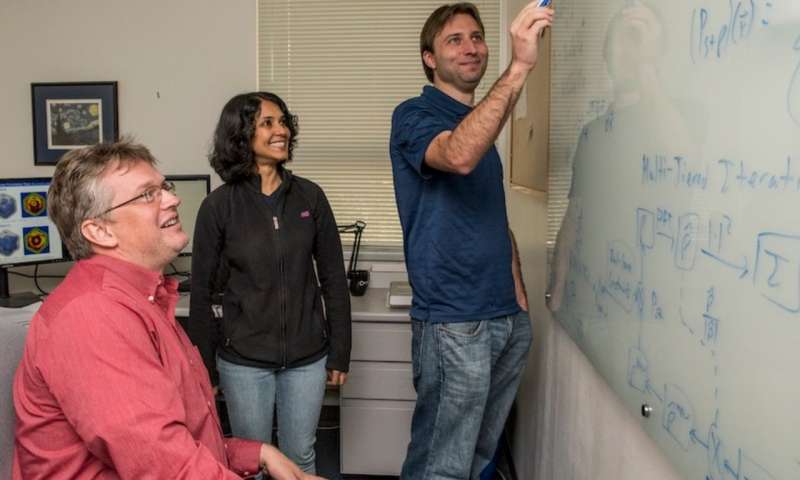 Berkeley Lab researchers, in collaboration with scientists from SLAC National Accelerator Laboratory and the Max Planck Institute, have demonstrated that fluctuation X-ray scattering is capable of capturing the behavior of biological systems in unprecedented detail.

Although this technique was first proposed more than four decades ago, its implementation was hindered by the lack of sufficiently powerful X-ray sources and associated detector technology, sample delivery methods, and the means to analyze the data. The team developed a novel mathematical and data analyses framework that was applied to data obtained from DOE’s Linac Coherent Light Source (LCLS) at SLAC. This breakthrough was recently reported in the Proceedings of the National Academy of Sciences (PNAS).

Understanding how proteins work at the atomic level enables scientists to engineer new functionality, such as the efficient production of biofuels, or to design drugs to block a protein’s function altogether. To this end, three-dimensional molecular imaging methods such as X-ray crystallography and cryo-electron microscopy provide critical high-resolution structural insights. However, these methods are not well-suited to capture the dynamics of proteins in their natural environment. Therefore, scientists often supplement models derived from crystalline or cryogenically frozen specimens with data from a technique called X-ray solution scattering that allows them to study proteins at room temperature, under physiologically relevant conditions.

“This results in what is essentially a massive amount of motion blur in the recorded data from which only few details can be reliably deduced,” explained Peter Zwart, a staff scientist in the Molecular Biophysics and Integrated Bioimaging (MBIB) Division and member of the Center for Advanced Mathematics for Energy Research Applications (CAMERA) at Berkeley Lab.

“One of the benefits of fluctuation scattering is that we don’t have to work on one particle at a time, but can use scattering data from many particles at once,” said Pande. This allows for a much more efficient experimental design, needing only a few minutes of beam time instead of several hours or days normally associated with single particle X-ray scattering methods.

A series of new mathematics and algorithms developed by CAMERA were critical to the success of the experiment. “The theory behind fluctuation scattering is very complex and the data from the experiment is much more complicated than traditional solution scattering. In order to get this to work, we needed novel methods to accurately process and analyze the data,” said Donatelli. These included a sophisticated noise-filtering technique, which boosted the signal-to-noise ratio of the data by several orders of magnitude.

“Five years ago, fluctuation scattering was essentially just a neat idea, without any indication if it was practically feasible or if one could derive any structural information from such data,” said Zwart. Since then, the team has developed mathematical tools to determine the structure from these data and demonstrated their algorithms on idealized experimental data from a single particle per shot.

In the latest work, Zwart and his colleagues teamed up with researchers from the Max Planck Institute to demonstrate the practical feasibility of these experiments under more realistic conditions. The authors studied the virus PBCV-1 and were able to obtain a far greater level of detail compared to standard solution scattering.

“The hope is that this technique will ultimately allow scientists to visualize details of structural dynamics that may be inaccessible through traditional methods,” said Zwart. The authors’ plans for the immediate future are to extend this method to time-resolved studies of how proteins change their shape and conformations when carrying out their biological function.