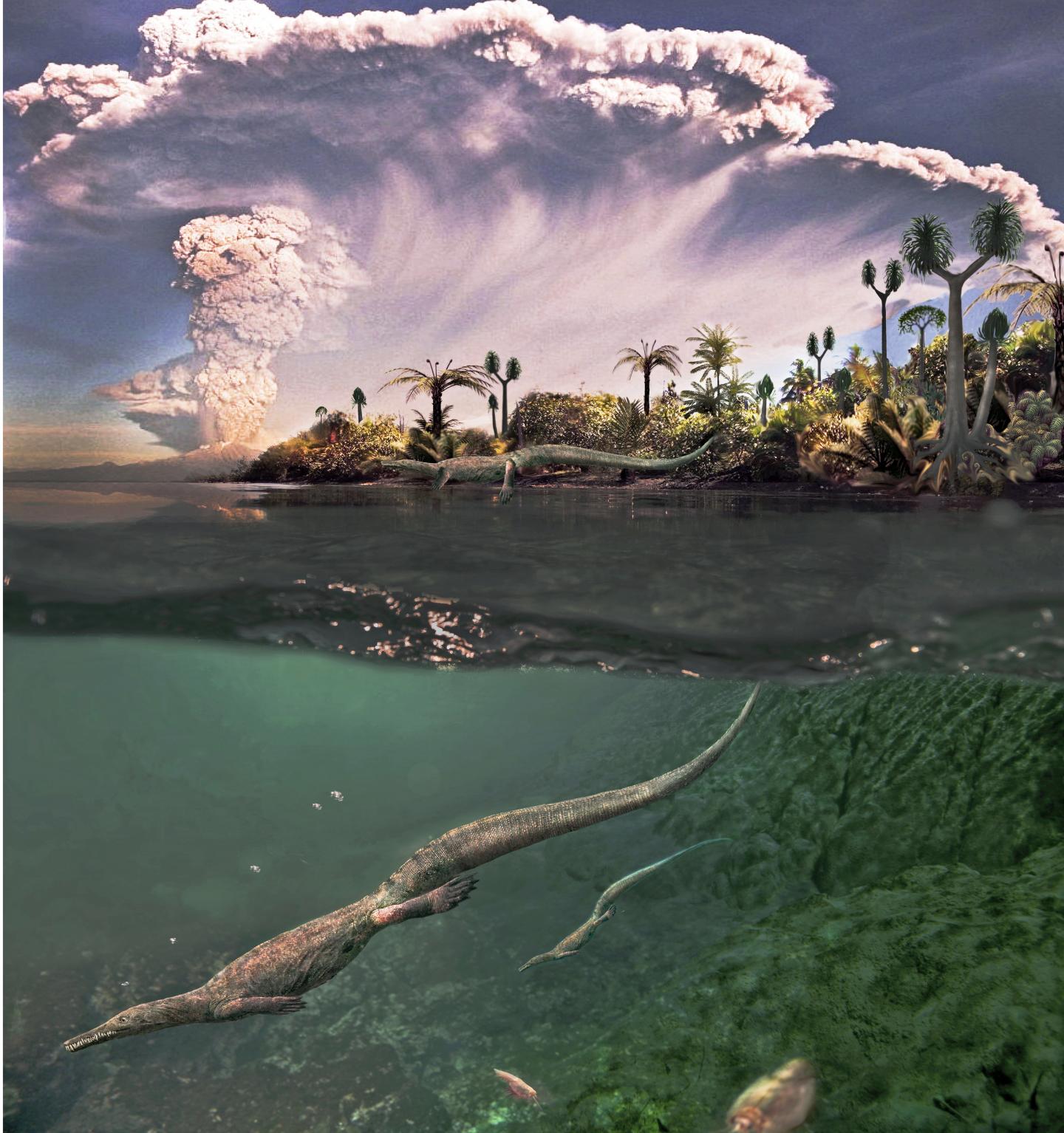 This is a drawing of Mesosaurus.

The oldest known aquatic reptiles, the mesosaurs, probably spent part of their life on land, reveals a new study published in Frontiers in Ecology and Evolution. The fossilized bones of adult Mesosaurus share similarities with land-dwelling animals, which — coupled with the relative scarcity of land-weathered fossilized remains of large specimens — suggests that older mesosaurs were semi-aquatic, whereas juveniles spent most of their time in the water. This new research emphasizes the importance of thoroughly analyzing fossilized remains from across all stages of a reptile’s life to get a full appreciation of its lifestyle and behavior.

“Despite being considered the oldest-known fully aquatic reptile, mesosaurs share several anatomical features with terrestrial species,” says Professor Graciela Piñeiro, who completed this research at the Facultad de Ciencias, Universidad de la República, Uruguay. “Our comprehensive analysis of the vertebrae and limbs of these ancient reptiles suggests they lived in the water during the earliest stages of their development, whereas mature adults spent more time on land.”

Since the discovery of unusually large Mesosaurus bones in the Mangrullo Formation of Uruguay, Piñeiro and her international team of colleagues wondered why the larger, presumably adult specimens, around two meters in length, were not as abundant as mesosaur skeletons of around 90 cm.

“The larger specimens, at least twice the length of the more commonly reported Mesosaurus fossils, could just be exceptionally big individuals. However, the environmental conditions of the Mangrullo lagoon of where they lived were harsh, making it difficult for the occasional mesosaur to reach such a relatively large size and age,” explains Piñeiro.

She continues, “We then realized that in comparison to the smaller, better-preserved specimens, larger Mesosaurus fossils were almost always disarticulated, very weathered and badly preserved. This suggested these larger specimens had extended exposure to the air when they died.”

During the reconstruction of a Mesosaurus skeleton and analysis of skeletons representing different life stages of this ancient reptile, the researchers examined the remains for evidence of a terrestrial, land-dwelling existence.

Terrestrial, semi-aquatic and aquatic animals show a clear difference in bone profiles, so they used morphometrics to analyze the shape of the fossilized bones. Forty Mesosaurus specimens, from juveniles to adults, were examined and their bone profiles compared to those of similar reptiles known to be aquatic or semi-aquatic, such as crocodiles and marine iguanas.

“The adult mesosaur tarsus (a cluster of bones in the ankle region) suggests a more terrestrial or amphibious locomotion rather than a fully aquatic behavior as widely suggested before,” says Pablo Núñez, also based at Universidad de la República. “Their caudal vertebrae, the tail bones, also showed similarities to semi-aquatic and terrestrial animals. This supports the hypothesis that the oldest and largest mesosaurs spent more time on land, where fossil preservation is not as good as in the subaquatic domain.”

Published as part of a special article collection on Mesosaurs, these findings have broader implications — both for future research on early prehistoric animals that laid eggs with embryonic membranes and for the understanding of reptile evolution.

Piñeiro explains, “Our study emphasizes the importance of working with fossils representing an entire population of a species, including a wide range of juveniles and adults, before establishing paleobiological interpretations on their lifestyle and behavior.”

She continues, “These findings also have important implications on the inferred lifestyle of species closely related to mesosaurs, particularly in the context of the evolution of the amniotic egg. For instance, thanks to our previous discovery of a mesosaur egg and embryos inside the mother’s body, our new findings can give support to earlier hypotheses suggesting that the amniotic egg might have appeared in aquatic or semiaquatic animals as a strategy to leave the water to avoid predation.”