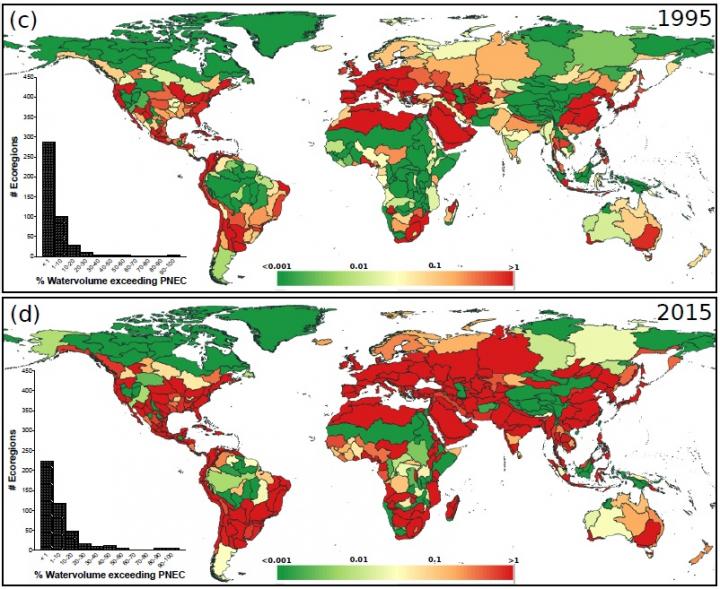 Over the past 20 years, concentrations of pharmaceuticals have increased in freshwater sources all over the world, as research by environmental experts at Radboud University has revealed. Levels of the antibiotic ciprofloxacin have reached the point of potentially causing damaging ecological effects. The research is the first to examine the risks of two particular medicines in global freshwater sources, and is being published in Environmental Research Letters on February 22nd. “The study calls for more widespread data gathering to measure the problem around the world.”

“Getting an accurate picture of the environmental risks of pharmaceuticals around the world depends on the availability of data, which is limited,” says Rik Oldenkamp, lead author of the article. “It’s true that there are models, such as the ePiE model, which can give detailed predictions of pharmaceutical concentrations in the environment, but these are often only applicable to places where we already have a lot of information, such as rivers in Europe.” The new model developed by the researchers, which builds on an existing model with a lower resolution, makes it possible to come up with worldwide predictions for individual ecoregions.

For the two pharmaceuticals investigated in the study – carbamazepine, an anti-epileptic drug, and ciprofloxacin, an antibiotic – the environmental risks were found to be 10 to 20 times higher in 2015 than in 1995. The increased human use of ciprofloxacin was found to have a particularly high impact globally. “The concentrations of this antibiotic can be harmful for bacteria in the water, and these bacteria in turn play an important role in various nutrient cycles,” says Oldenkamp. “Antibiotics can also have a negative impact on the effectiveness of bacteria colonies used in wastewater treatment.”

Antibiotic resistance as an environmental issue

Antibiotic resistance has been on the agenda of the World Health Organization (WHO) and United Nations General Assembly for a few years now. “Generally, it’s seen as a problem for the health sector, as resistant bacteria can be spread within hospitals or through livestock,” says Oldenkamp. “But there’s little awareness of the role of the environment in this problem, even though it becomes increasingly clear that the environment functions as a source of resistance for various pathogens.”

“Our model predicts a relatively high environmental risk for ecoregions in densely populated and dry areas such as the Middle East, yet those are precisely the areas where there is little data on pharmaceutical use and concentrations in surface waters,” says Oldenkamp. The researchers predicted human pharmaceutical consumption in these areas using regression models based on consumption in other countries, along with socio-economic and demographic information, and linked this to information related to other factors such as water sources and the number of people with access to wastewater treatment.

“Our model shows a particular need for new data in these types of areas,” says Oldenkamp. “The model is really a starting point for creating an insight into the environmental risks posed by pharmaceuticals all over the world.”