The United States has relied on affordable coal-based electricity to power homes, businesses and industry for decades. Hundreds of coal-fired power plants were constructed in the mid-20th century to meet steadily rising demand for reliable, low-cost electricity.

Today, that aging fleet provides nearly a third of the nation’s power amid evolving economic, regulatory and environmental challenges that have shifted the energy landscape. As the only U.S. Department of Energy (DOE) research laboratory dedicated to fossil fuels, the National Energy Technology Laboratory (NETL) is pursuing ambitious technological innovations that will recharge American coal power generation to enhance grid reliability and resiliency through fuel diversity. The nation’s vast coal reserves provide reliable power at an affordable cost while stimulating the economy and contributing to U.S. energy dominance.

NETL strives to discover, integrate, and mature technology solutions to enhance the nation’s energy foundation and protect the environment for future generations. In doing so, NETL has richly contributed to DOE’s long history of developing technologies that make the use of coal cleaner and more efficient – including coal gasification, advanced coal-energy conversion technologies, and carbon capture, utilization and storage systems. NETL is continuing that legacy as it works to advance emerging technologies with the potential to improve energy security and reliability.

Coal contributed about $26 billion in sales and $13 billion in employee wages and salaries to the U.S. economy in 2016, according to the National Mining Association. Advanced technologies that boost efficiency and competitiveness will preserve jobs for more than 130,000 American coal miners and expand employment opportunities for an estimated 50,000 new hires expected over the next 10 years as energy demand rises and experienced workers retire.

With an estimated 477 billion short tons of coal, the United States contains more coal than any other nation worldwide—a competitive advantage that enabled the U.S. to export 97 million short tons in 2017. As a renowned fossil-energy science and engineering resource, NETL recognizes the immense value of the nation’s most abundant fossil fuel, which accounts for 90 percent of U.S. fossil energy reserves, particularly when reliable access to energy is critical. A recent analysis by NETL experts indicated that coal was essential in maintaining power during a frigid winter storm, known as a bomb cyclone, which affected the eastern U.S. from Dec. 27, 2017, through Jan. 8, 2018.

The study also cautioned that continued retirement of fossil fuel power plants could have an adverse impact on the nation’s ability to meet power generation needs during future severe weather events.

More than 80 percent of the nation’s coal-fired power plants were built from 1950 to 1990, and the number of active facilities has declined rapidly in recent years, dropping from 616 in 2006 to 381 in 2016. Retirements are often tied to plant age, challenges in complying with environmental regulations, competition from cheap natural gas and limitations in adapting to modern grid demands. The aging fleet was designed to provide steady baseload power to customers via a complex, long-range transmission and distribution network. However, modern power plants must be increasingly flexible—capable of cycling to accommodate fluctuations in energy demand, intermittent availability of renewable energy resources and variable prices for alternative energy options—while reducing greenhouse gas emissions.

Capital investments are difficult for operators of coal-fired power plants to justify as coal consumption declines, from a peak of nearly 1.2 billion short tons in 2007 to 679 million in 2016. The U.S. Energy Information Administration (EIA) predicts that coal consumption nationwide could drop to 400 million tons by 2030, regardless of potential changes to environmental restrictions. The nation’s net coal-fired generating capacity decreased by nearly 60 gigawatts (GW) from 2011 through 2016, due to plant closures. EIA predictions indicate that another 65 GW in coal power generation will be lost to retirement by 2030, due to competitively priced natural gas and greater penetration of renewables. 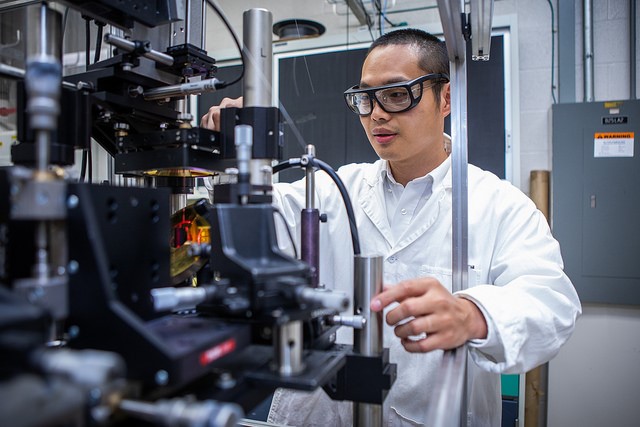 Bo Liu, a researcher at NETL, works on the Lab’s laser-heated pedestal growth (LHPG) system. Innovative sensors made from optical fibers, such as those created using the LHPG system, offer new possibilities to boost efficiency and optimize performance within advanced coal power systems.

To remain economically viable, existing coal power facilities must boost efficiency to cut costs and ensure reliability by reducing down time. With that in mind, the DOE Office of Fossil Energy launched an initiative in 2018 to competitively fund research and development (R&D) efforts that improve the efficiency, reliability and emissions of the existing fleet and lay the foundation for the next generation of coal-fired power plants.

NETL is leading the charge, tackling trailblazing research and analysis in house and in collaboration with industry stakeholders to ensure coal’s viability in the coming years. Key R&D efforts focus on the following technology areas:

High-performance materials. Advanced combustion systems offer valuable advantages in converting coal to energy with greater efficiency and reduced environmental impact, but they also create harsh environments – with corrosive conditions and temperatures as high as 1600 degrees Celsius – that test the limits of existing materials used for boilers, turbines and other components. Modern cycling demands introduce additional challenges, as these materials must withstand the expansion and contraction that occurs when they repeatedly heat up and cool down. Considering that unexpected material failure is a critical factor driving forced plant outages, NETL researchers are working to develop advanced alloys for use in ultrasupercritical boilers and turbines within these systems.​

​Simulation-based engineering. NETL is creating advanced computational tools that can be applied at atomistic, device, process, grid and market scales to support the existing fleet and accelerate the deployment of fossil fuel technologies. These tools allow researchers to simulate how engineered devices and systems would work in the real world to better predict and optimize performance. In doing so, scientists can limit costs and expedite R&D efforts by focusing their work on the most viable solutions. These tools examine multiphase flow science, advanced process systems engineering, computational modeling of materials and other areas necessary to ensure the success of fossil energy technologies. One example is the Carbon Capture Simulation Initiative Toolset, a suite of computational tools and models designed to reduce cost and risk during the scale-up process for carbon capture technologies. The R&D 100 Award-winning toolset was recently released as open source software, allowing stakeholders in industry, government, and academia to freely use, modify, and customize the software in support of the development of carbon capture and related technologies. The Institute for the Design of Advanced Energy Systems (IDAES) builds upon this success by collecting the best systems modeling and optimization capabilities from national labs and leading research universities under NETL’s proven leadership to develop a next-generation modeling and optimization platform aimed at accelerating innovation, focusing and prioritizing R&D, and improving the efficiency and reliability of the existing fleet.

The success of these efforts – combined with water management R&D and the application of innovative energy concepts – will ensure that coal-based power facilities can effectively cycle and produce power at rates required by the grid while maintaining high levels of reliability and environmental performance. Support and engagement from a coalition of industry technology providers, coal suppliers and power generators will be essential to ensure the successful commercial adoption and broad deployment of NETL’s innovative technologies. The Lab is working with existing coal power plant operators and other external partners to ensure the relevance of research efforts and conduct rapid early tests and deployment. In fiscal year 2018, NETL was engaged in 28 active projects with laboratory, commercial and academic partners to test and develop new technologies in collaboration with coal plant partners.

Looking to the next generation

As NETL works to preserve critical coal-fired power generation by developing innovative technologies for existing facilities, researchers are also working to revolutionize the next generation of coal plants. In fact, many of NETL’s emerging solutions for existing coal power plants – including novel sensors, controls and materials—can also be applied to future builds.

Based on the evolving needs of tomorrow’s electrical grid, DOE’s Office of Fossil Energy (FE) issued a Request for Information (RFI) in mid-2018 seeking ways to improve steam-based power cycles for coal-fired boilers. The provided information is contributing to NETL’s efforts to develop next-generation coal-fired power plants that provide stable power generation with operational flexibility, high efficiency and low emissions. The information will help researchers meet specific criteria for the coal plants of the future envisioned by Assistant Secretary for FE Steven Winberg. Compared to existing generation, these systems will be smaller, modular and more nimble – able to quickly adjust to frequent changes in power demand. They will also boost efficiency, operating at higher temperatures and pressures. Reducing the scale of operation cuts investment costs and speeds commercialization but doing so often comes with a trade-off in efficiency. Focusing on smaller generation will develop highly efficient, flexible power systems that reduce emissions to ensure the affordable, responsible use of fossil fuels for decades to come.

Coal power remains vital to the nation’s health, safety and security. NETL’s work to transform the existing and future fleets of coal-fired power plants through groundbreaking R&D is imperative to maintain quality of life and meet growing power demands as the U.S. progresses toward a more diverse energy future. Innovations for fossil energy technology also offer valuable economic opportunities to spark investments in existing plants and new facilities, preserve jobs at plants that might otherwise close, create work at state-of-the-art builds, and revitalize manufacturing through the development of novel materials and technologies. NETL’s pioneering technology solutions will ultimately bolster national prosperity and energy dominance by enabling the coal industry to adapt to changing needs as it continues to provide reliable, affordable and efficient power.

Cassie Shaner is a technical writer and editor for SSC-Deltha at the National Energy Technology Laboratory. She earned a bachelor’s degree in journalism and master’s degree in integrated marketing communications, both from West Virginia University. She previously worked as a news reporter, multimedia coordinator and assistant managing editor for The Dominion Post newspaper in Morgantown, West Virginia.