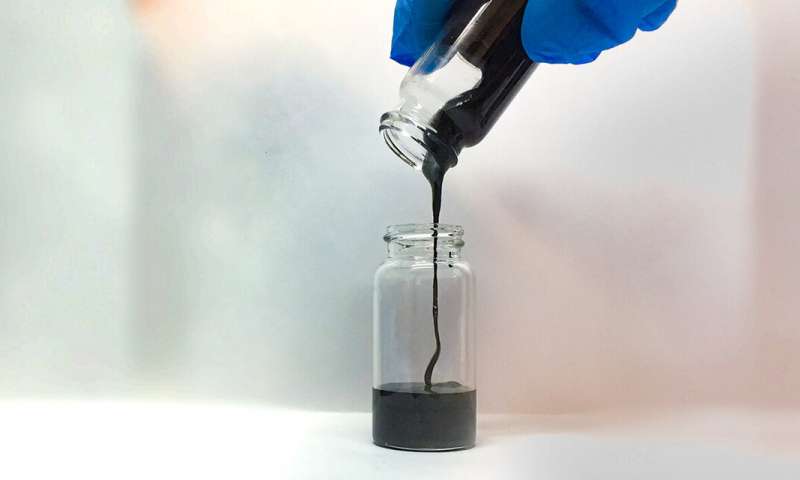 Carnegie Mellon researchers have developed a dual-conductive polymer/carbon composite matrix with lithium microparticles that could be used as an electrode in next-generation batteries. Credit: Carnegie Mellon University

Researchers from Carnegie Mellon University’s Mellon College of Science and College of Engineering have developed a semiliquid lithium metal-based anode that represents a new paradigm in battery design. Lithium batteries made using this new electrode type could have a higher capacity and be much safer than typical lithium metal-based batteries that use lithium foil as anode.

The interdisciplinary research team published their findings in the current issue of Joule.

Lithium-based batteries are one of the most common types of rechargeable battery used in modern electronics due to their ability to store high amounts of energy. Traditionally, these batteries are made of combustible liquid electrolytes and two electrodes, an anode and a cathode, which are separated by a membrane. After a battery has been charged and discharged repeatedly, strands of lithium called dendrites can grow on the surface of the electrode. The dendrites can pierce through the membrane that separates the two electrodes. This allows contact between the anode and cathode, which can cause the battery to short circuit and, in the worst case, catch fire.

“Incorporating a metallic lithium anode into lithium-ion batteries has the theoretical potential to create a battery with much more capacity than a battery with a graphite anode,” said Krzysztof Matyjaszewski, J.C. Warner University Professor of Natural Sciences in Carnegie Mellon’s Department of Chemistry. “But, the most important thing we need to do is make sure that the battery we create is safe.”

One proposed solution to the volatile liquid electrolytes used in current batteries is to replace them with solid ceramic electrolytes. These electrolytes are highly conductive, non-combustible and strong enough to resist dendrites. However, researchers have found that the contact between the ceramic electrolyte and a solid lithium anode is insufficient for storing and supplying the amount of power needed for most electronics.

Working with the Mellon College of Science’s Matyjaszewski, a leader in polymer chemistry and materials science, and Jay Whitacre, Trustee Professor in Energy in the College of Engineering and director of the Wilton E. Scott Institute for Energy Innovation at Carnegie Mellon, who is renowned for his work in developing new technologies for energy storage and generation, Li and Wang created a dual-conductive polymer/carbon composite matrix that has lithium microparticles evenly distributed throughout. The matrix remains flowable at room temperatures, which allows it to create a sufficient level of contact with the solid electrolyte. By combining the semiliquid metal anode with a garnet-based solid ceramic electrolyte, they were able to cycle the cell at 10 times higher current density than cells with a solid electrolyte and a traditional lithium foil anode. This cell also had a much longer cycle-life than traditional cells.

“This new processing route leads to a lithium metal-based battery anode that is flowable and has very appealing safety and performance compared to ordinary lithium metal. Implementing new material like this could lead to step change in lithium-based rechargeable batteries, and we are working hard to see how this works in a range of battery architectures,” said Whitacre.

The researchers believe that their method could have far reaching impacts. For example, it could be used to create high capacity batteries for electric vehicles and specialized batteries for use in wearable devices that require flexible batteries. They also believe that their methods could be extended beyond lithium to other rechargeable battery systems, including sodium metal batteries and potassium metal batteries and might be able to be used in grid-scale energy storage.