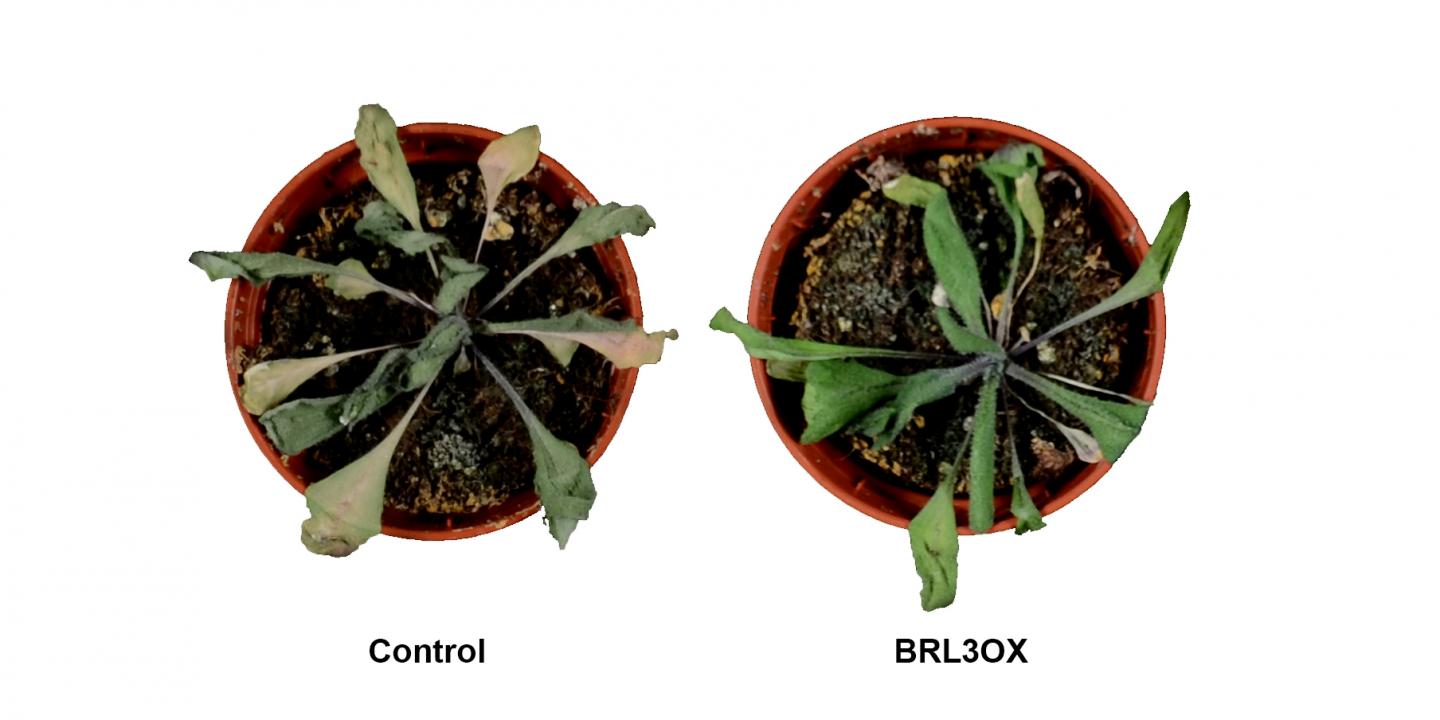 Arabidopsis thaliana plants after drought stress. On the left a control (wild-type) plant and on the right a plant overexpressing the vascular brassinosteroid receptor BRL3. Credit: CRAG

Extreme drought is one of the effects of climate change that is already being perceived. This year, the decrease in rainfall and the abnormally hot temperatures in northern and eastern Europe have caused large losses in cereals and potato crops and in other horticultural species. Experts have long warned that to ensure food security it is becoming necessary to use plant varieties that are productive in drought conditions. Now, a team led by the researcher at the Center for Research in Agricultural Genomics (CRAG) Ana Caño-Delgado has obtained plants with increased drought resistance by modifying the signaling of the plant steroid hormones, known as brassinosteroids. The study, published in the journal Nature Communications, is the first to find to find a strategy to increase hydric stress resistance without affecting overall plant growth.

Ana Caño-Delgado has been studying how the plant steroids -the brassinosteroids- regulate plant development and growth in the model plant Arabidopsis thaliana for more than 15 years. It is known that these phytohormones bind to different cell membrane receptors, causing a signaling cascade in the cell that will end up producing effects such as cell elongation or division. Since 2016 and thanks to a project funded by the European Research Council (ERC), her laboratory uses this knowledge to find strategies that confer drought resistance to plants. By modifying brassinosteroid signaling researchers had so far achieved arabidopsis plants with increased drought ressistance, but due to the complex action of these hormones on plant growth, these plants were much smaller than the respective controls.

In the work now published in Nature Communications, researchers have studied drought resistance and growth in Arabidopsis thaliana plants with mutations in different brassinosteroid receptors. Thanks to this detailed study, researchers have discovered that plants that over-express the BRL3 brassinosteroid receptor in the vascular tissue are more resistant to the lack of water than control plants and that, unlike the other mutants, they do not present defects in their development and growth. “We have discovered that modifying brassinosteroid signaling only locally in the vascular system, we are able to obtain drought resistant plants without affecting their growth”, explains Caño-Delgado.

Afterwards, CRAG researchers in collaboration with researchers from Europe, the United States and Japan analyzed the metabolites in the genetically modified plants and demonstrated that arabidopsis plants overexpressing the BRL3 receptor produce more osmeoprotective metabolites (sugars and proline) in the aerial parts and in the roots under normal irrigation conditions. When these plants were exposed to drought conditions, these protective metabolites quickly accumulated in the roots, protecting them from drying out. Hence, the BRL3 overexpression prepares the plant to respond to the situation of water scarcity, a mechanism known as priming that can be somehow compared to the effect of the vaccines in the human body, which also prepare the body to respond to future pathogens.

From fundamental to applied research. A potential solution for species of agronomic interest.

Although this discovery has been made with a small herb used as a model plant, Arabidopsis thaliana, the research team led by Caño-Delgado is already working on applying this strategy in plants of agronomic interest, especially in cereals.

“Drought is one of the most important problems in today’s agriculture. So far, the biotechnological efforts that have been made to produce plants more resistant to drought have not been very successful because as a counterpart to an enhanced drought resistance there was always a decrease in plant growth and productivity. It seems that we have finally found a strategy that could be applied and we want to continue exploring it “, concludes Caño-Delgado.