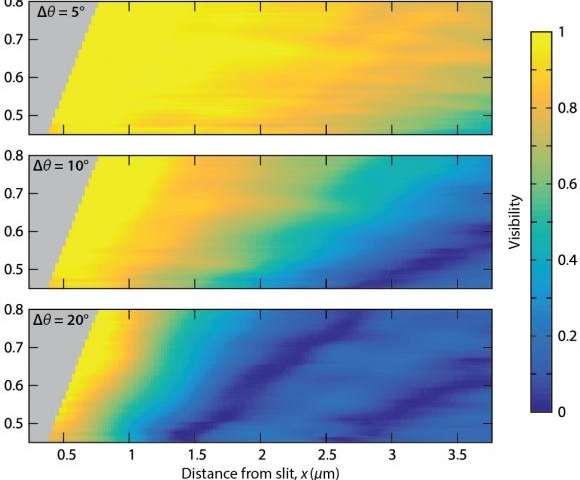 A new technique detects spatial coherence in light at smaller scales than had been possible. The image shows visibility curves appearing at the nanoscale, the telltale sign of spatial coherence. (Credit: Pacifici Lab / Brown University)

One of the differences between lasers and desk lamps is that laser light is spatially coherent, meaning the peaks and valleys of the light waves are correlated with each other. The jumbled, uncorrelated waves coming from a desk lamp, on the other hand, are often said to be incoherent.

That’s a bit of a misnomer, however. In theory, virtually all light—even “incoherent” light—can have a high degree of spatial coherence. But detecting that coherence requires probing light at extremely small length scales that cannot be accessed using traditional techniques.

Now, researchers in the lab of Domenico Pacifici, professor in Brown University’s School of Engineering, have found a way to detect spatial coherence in light beams at the scale of a few hundred nanometers—a much smaller scale than has ever been possible. The research provides the first experimental verification of optical coherence theory at the nanoscale.

“There’s a very small length scale at which light that’s often said to be incoherent behaves coherently, but we’ve lacked experimental techniques to quantify it,” said Drew Morrill, lead author of an article describing the new research. “That degree of coherence contains meaningful information we can now access, which could be useful in characterizing light sources and potentially for new imaging and microscopy techniques.”

Morrill, now a graduate student at the University of Colorado, performed the work as an undergraduate at Brown. The research paper, coauthored with Pacifici and Brown postdoctoral scholar Dongfang Li, is published in Nature Photonics.

Traditional methods for testing the extent to which light is spatially coherent involve devices that can split the wavefront of a light beam. The most famous of these is the Young interferometer, also known as the double slit experiment. The experiment consists of a light source aimed at a detector screen, with an opaque barrier between the two. The barrier has two small slits in it, allowing two rays of light to pass through. As the two rays emerge from the slits, some of the light waves are bent toward each other, causing them to recombine. Recombining waves that are coherent will create an interference pattern—a series of light and dark patches—on the detector screen. By measuring the contrast of those light and dark patches, researchers can quantify the light’s coherence.

The problem is that for light sources with very low spatial coherence, the double slit experiment doesn’t work as well because the length scales at which the interference patterns appear is very small. Producing interference over small length scales requires the two slits to be placed very close together. But when the distance between the two slits gets close to of the wavelength of the light shown upon them, the experiment breaks down. The interferometer can no longer split and recombine the beam properly to look for interference.

“The interference fringes are smeared out, making it difficult to quantify the degree of coherence,” Morrill said. “But if you could get around the fundamental limitations of the double slit experiment, theoretically you should be able to see those fringes.”

To get around those limitations, the researchers employed a different kind of interferometer that makes use of plasmonics, the interaction between light and electrons in a metal. Instead of two slits, the plasmonic interferometer has a slit and a groove in a surface made of silver. Light hitting the groove creates a surface plasmon polariton (SPP), a density wave of electrons moving across the silver surface. The SPP propagates toward the slit, where it recombines with the light going through the slit. Because the SPP is related to the original beam of light but has a smaller wavelength, and because it diffracts at a 90-degree angle toward the slit, the groove and slit in the plasmonic interferometer can be placed closer together than the two slits in the Young interferometer.

The researchers amassed hundreds of these tiny interferometers, designed and fabricated with nanometric precision, on a microchip. They used that chip to the measure coherence lengths of a broadband xenon lamp for hundreds of wavelengths across the visible spectrum. For blue-green light, measured coherence lengths dropped as low as 330 nanometers—smaller than the 500 nanometer incident wavelength of the light source.

The results are the first experimental confirmation of coherence theory at or below the wavelength of light.

“That was a really exciting result,” Morrill said. “Without experimental verification, we really didn’t know if these equations held up for these small scales, but it turns out that they do.”

In terms of potential applications, the plasmonic chip could help manufacturers of light sources for microscopy, holography and other applications to better characterize their light sources. The integration of the interferometers on a single chip makes the processes of characterizing a light source quick and easy.

“You can just record the degree of spatial coherence in a single snapshot by taking a picture of the light intensity through the densely spaced plasmonic interferometers, which only takes a few seconds,” said Li, who led the fabrication of the meter.

“We’re providing scientists with a new tool to quantify the degree of coherence of light at a length scale that hadn’t been possible before,” Pacifici said.