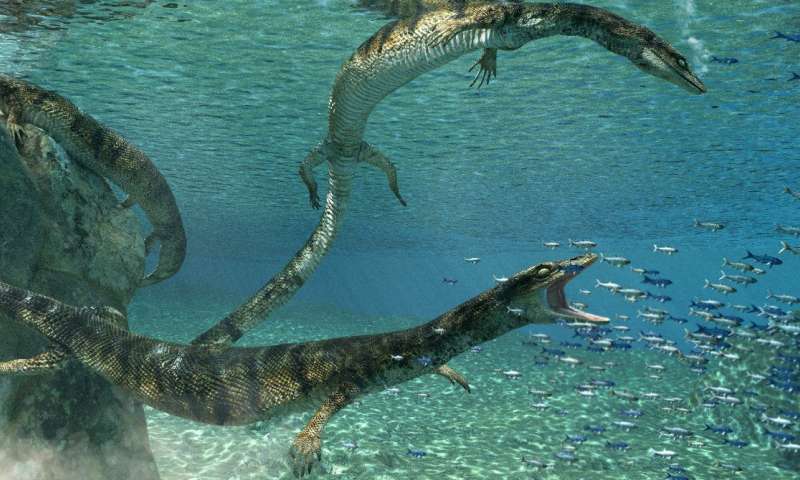 The newly discovered marine lizard, named Primitivus manduriensis, hunted in the shallow waters of what is now Puglia, Italy, 70 to 75 million years ago. Credit: Fabio Manucci

University of Alberta paleontologists discovered a new species of marine lizard that lived 70 to 75 million years ago, with its muscle and skin remarkably well preserved.

The fossil is a dolichosaur, a marine lizard related to snakes and mosasaurs. Called Primitivus manduriensis, it was found in Puglia, Italy, and named after the local Manduria variety of red wine grape primitivo.

The fossil was discovered in what was once a shallow water environment. After it died, the lizard fell to the bottom and was covered in sediment, safe from the moving water that would otherwise have scattered its remains. And with no apparent predators around to feed on the carcass, it remained largely intact.

“(The marine lizards) are essentially small, long-bodied animals that look like regular lizards with longer necks and tails,” explained Ph.D. student Ilaria Paparella, lead author of the study detailing the discovery. “They have paddle-like hands and feet for swimming but could also move on land.”

The fossil is significantly younger than other existing specimens from the group, extending the time range of their existence by about 15 million years.

For Paparella, one of the most interesting things about the specimen was the ability to study the soft tissues, including scales, muscle and skin. She conducted the research as part of her Ph.D. with U of A paleontologist Michael Caldwell, chair of the Department of Biological Sciences.

“There need to be very special conditions for soft tissue to be preserved on a fossil,” she explained. “The location where the Primitivus manduriensis was found has a great deal of potential. We hope to get permits from the Italian authorities to conduct further fieldwork.

“This was the first time I’ve ever had the opportunity to look at the complete picture of a beautifully preserved specimen, right down to the scales,” added Paparella. “For living species, scientists use scale patterns and skin for identification. It was unique to be using these techniques to look at a specimen that died 70 million years ago.”

The paper, “A New Fossil Marine Lizard With Soft Tissues From the Late Cretaceous of Southern Italy,” was published in Royal Society Open Science.