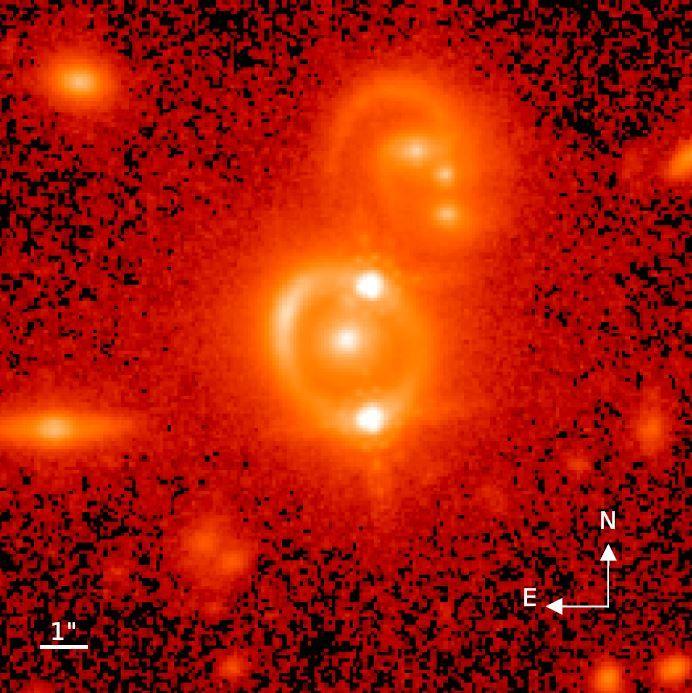 The question of how quickly the universe is expanding has been bugging astronomers for almost a century. Different studies keep coming up with different answers — which has some researchers wondering if they’ve overlooked a key mechanism in the machinery that drives the cosmos.

Now, by pioneering a new way to measure how quickly the cosmos is expanding, a team led by UCLA astronomers has taken a step toward resolving the debate. The group’s research is published today in Monthly Notices of the Royal Astronomical Society.

At the heart of the dispute is the Hubble constant, a number that relates distances to the redshifts of galaxies — the amount that light is stretched as it travels to Earth through the expanding universe. Estimates for the Hubble constant range from about 67 to 73 kilometers per second per megaparsec, meaning that two points in space 1 megaparsec apart (the equivalent of 3.26 million light-years) are racing away from each other at a speed between 67 and 73 kilometers per second.

Most methods for deriving the Hubble constant have two ingredients: a distance to some source of light and that light source’s redshift. Looking for a light source that had not been used in other scientists’ calculations, Birrer and colleagues turned to quasars, fountains of radiation that are powered by gargantuan black holes. And for their research, the scientists chose one specific subset of quasars — those whose light has been bent by the gravity of an intervening galaxy, which produces two side-by-side images of the quasar on the sky.

Light from the two images takes different routes to Earth. When the quasar’s brightness fluctuates, the two images flicker one after another, rather than at the same time. The delay in time between those two flickers, along with information about the meddling galaxy’s gravitational field, can be used to trace the light’s journey and deduce the distances from Earth to both the quasar and the foreground galaxy. Knowing the redshifts of the quasar and galaxy enabled the scientists to estimate how quickly the universe is expanding.

The UCLA team, as part of the international H0liCOW collaboration, had previously applied the technique to study quadruply imaged quasars, in which four images of a quasar appear around a foreground galaxy. But quadruple images are not nearly as common — double-image quasars are thought to be about five times as abundant as the quadruple ones.

To demonstrate the technique, the UCLA-led team studied a doubly imaged quasar known as SDSS J1206+4332; they relied on data from the Hubble Space Telescope, the Gemini and W.M. Keck observatories, and from the Cosmological Monitoring of Gravitational Lenses, or COSMOGRAIL, network — a program managed by Switzerland’s Ecole Polytechnique Federale de Lausanne that is aimed at determining the Hubble constant.

Tommaso Treu, a UCLA professor of physics and astronomy and the paper’s senior author, said the researchers took images of the quasar every day for several years to precisely measure the time delay between the images. Then, to get the best estimate possible of the Hubble constant, they combined the data gathered on that quasar with data that had previously been gathered by their H0liCOW collaboration on three quadruply imaged quasars.

“The beauty of this measurement is that it’s highly complementary to and independent of others,” Treu said.

The UCLA-led team came up with an estimate for the Hubble constant of about 72.5 kilometers per second per megaparsec, a figure in line with what other scientists had determined in research that used distances to supernovas — exploding stars in remote galaxies — as the key measurement. However, both estimates are about 8 percent higher than one that relies on a faint glow from all over the sky called the cosmic microwave background, a relic from 380,000 years after the Big Bang, when light traveled freely through space for the first time.

“If there is an actual difference between those values, it means the universe is a little more complicated,” Treu said.

On the other hand, Treu said, it could also be that one measurement — or all three — are wrong.

The researchers are now looking for more quasars to improve the precision of their Hubble constant measurement. Treu said one of the most important lessons of the new paper is that doubly imaged quasars give scientists many more useful light sources for their Hubble constant calculations. For now, though, the UCLA-led team is focusing its research on 40 quadruply imaged quasars, because of their potential to provide even more useful information than doubly imaged ones.