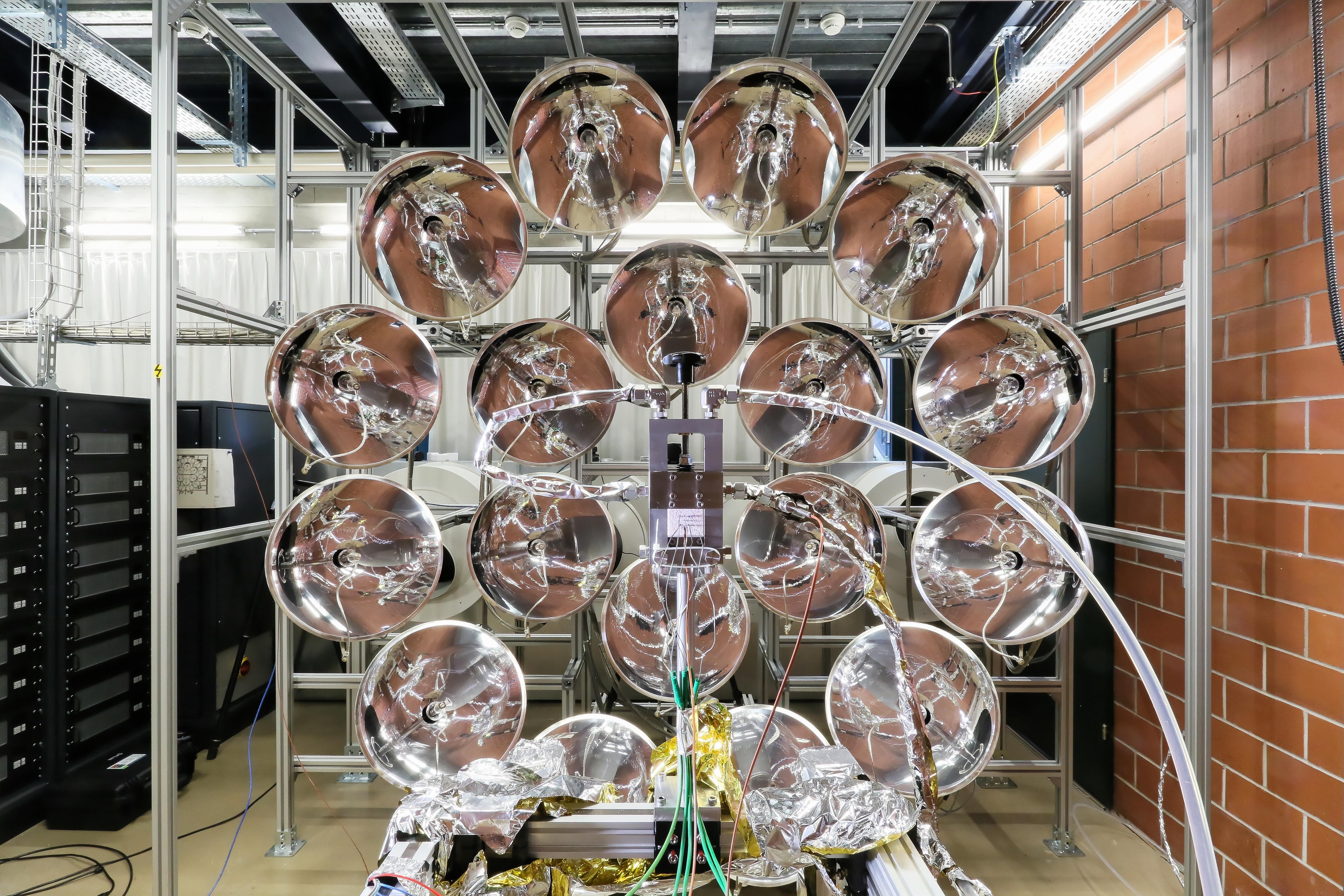 Eighteen light sources arranged in a half-sphere can mimic the equivalent of several thousand times the sun’s radiation received on earth, with unparalleled power and precision. This system, developed by an EPFL laboratory, can be used to test various materials in extreme conditions. An article on this topic was published today in Optics Express.

A luminous flux equivalent to 20,000 suns? The energy received over the course of one day in the desert? The exhaust of a rocket engine? The luminous intensity that occurs in space, close to the sun? An EPFL laboratory has managed to replicate the heat and light of the sun’s radiation with unparalleled precision and power. This system can be used to test solar power equipment and analyze materials in extreme temperature and heat conditions, providing a full picture in just a few hours without the vagaries of the weather. Detailed information on the system is contained in an article appearing today in Optics Express.

The system, which was developed in collaboration with the Australian National University and the company Kinoton Digital Solutions, was designed to produce the most intense light possible that can be adjusted precisely and does not create unnecessary heat, as that could damage the materials being tested. To achieve this, 18 light sources are placed in two concentric circles around a virtual half-sphere nearly two meters in diameter. Each of these lamps consists of a reflector – a sort of cup-shaped mirror – that is lit by a Xenon bulb. The light waves given off in all directions by the bulb are thus reflected and focused on a specific point. At the spot where the light beams from the different lamps meet, the maximum intensity reaches 21,700 suns (21.7 MW m-2). This is the spot where materials and devices can be tested.

This system, which fills an entire room at the Laboratory of Renewable Energy Science and Engineering (LRESE), can be used to run many types of tests under stable and controlled experimental conditions. The research group headed by Sophia Haussener uses it mainly for the group’s work on new processes for converting and storing solar energy. For example, they test heat transfer between various materials, which could improve the output from commercial concentrating solar power plants (the tower or cylindro-parabolic forms, both of which are in fast-growing use in the United States and Spain) or demonstrate the viability of new approaches to harnessing, transferring and converting light energy. Other collaborative efforts are under way as well, such as for characterizing space materials.

A versatile current that changes everything

The system’s unprecedented performance was achieved thanks in large part to a new type of reflector, which is produced through electroforming. “This is a method for the electrolytic deposition of metal, and it can replicate a model with unparalleled exactness,” said Gaël Levêque, a scientist at LRESE. “The precision of reflection is much better.”

There are more modules than in existing solar simulators and the current can be adjusted, which means the amount of power can be precisely controlled. The current provided to the lamps can be dialed anywhere from 70% to 120% of the 90 injected amps: this makes it possible to control the amount of luminous power delivered. For a given level of power or flux, the researcher has several choices: “To get 5.4 KW in power, for example, we can use six lamps – in other words just the first circle of lamps – at 120%, or nine lamps at 70%,” said Levêque. Using fewer lamps “closes” the angle of incidence of the radiation, which means that the total light beam is narrower and more powerful. Increasing the number of lamps, on the other hand, means the light beam will be wider and less concentrated, which is practical for lighting a surface more uniformly.

A twin in Australia and an open-source method

This system has a twin in Canberra, Australia, which was built at the same time as EPFL’s. But it’s more than just a system, in fact: it’s an open-source method that the researchers developed in collaboration with their colleagues at the Australian National University and the company Kinoton Digital Solutions GmbH. Other systems can thus be built on the basis of these calculations, using more or fewer lamps and different dimensions. Stronger radiative fluxes could also be achieved by using more powerful lamps or adjusting several other parameters.