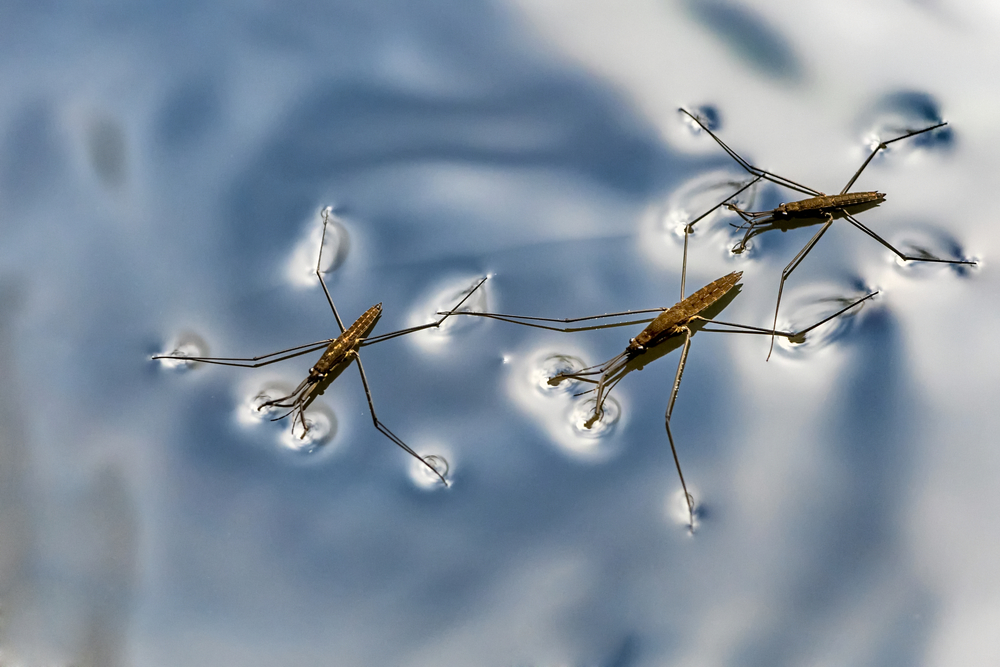 While walking beside the creek in the Beijing Botany Garden one autumn, Yu Tian, a professor of mechanical engineering at Tsinghua University in China, noticed the beautiful shadows cast by water striders on the bottom of a shallow creek. If you’ve spent any time in or around water you’ve likely seen these water insects zipping along — they appear to walk or glide swiftly on the surface of still water.

The water striders’ leg shadows “were rounded or ‘half-spindle’ dark area surrounded by bright rings, and the shadow size seemed to be proportional to the size of the water strider, so I wondered if their weight could be represented by the area of its leg shadows,” he said.

Intrigued by the floating mechanisms of water striders and the updated Archimedes’ principle, which states that floating force equals the expelled liquid volume, Tian found it extremely odd that even though ex vivo studies — taking place outside an organism — of water strider legs pressing against the water’s surface had been done, and an accurate relationship between the pressed depth and the supporting force of water surface had been measured with an electronic balance, no one had ever reported how the forces acted upon a water strider’s six legs (its front pair are short).

Now, as Tian’s group reports this week in Applied Physics Letters, from AIP Publishing, they have developed a “shadow method” based on the refraction of light to make these measurements.

Curved transparent materials can refract light effectively — like the lens of a camera. In this case, once the water surface becomes distorted by a water strider’s superhydrophobic legs, light can be refracted by it — and a dark shadow surrounded by a bright ring forms beneath it.

“From the geometry of the shadow, the curvature of the water surface can be precisely reconstructed to obtain the corresponding water volume and the equivalent floating force based on the updated Archimedes’ principle,” said Tian. All it takes to make these measurements are a flashlight, transparent water vessel, water and a simple camera.

The team found that simultaneous in situ measuring forces act upon the individual legs of the water-walking arthropods in a natural state and are crucial when it comes to discerning their locomotion principles, which may be used to guide the design of advanced biomimetic robotics.

“While the insects’ floating mechanism is widely recognized to rely upon the updated Archimedes’ principle, their leg floating forces still need to be experimentally measured and compared to the weight of the arthropods. So gaining accurate simultaneous measurements of the multiple tiny forces is necessary,” he explained.

By using the team’s method, the motion of the water strider can be easily and accurately quantified. “While waxy materials and microstructure on water striders’ legs are generally believed to keep them superhydrophobic, we were able to clearly identify the motion of their legs by observing the shadows they cast,” Tian said.

The team observed “that when the shadows of a leg aren’t ‘regular and smooth,’ water striders lift their leg up to rub it with their mouth. After this ‘rubbing,’ the shadow appears smooth again,” he continued. “The shape of the shadow represents the hydrophobicity of the legs, so this rubbing is a process to recover its superhydrophobocity.”

In terms of applications, “our shadow method can sensitively and accurately measure the forces of the individual legs of water striders,” Tian said. “And it can be extended to other liquid-surface-walking arthropods or floating objects such as sub-millimeter-diameter particles and milligram-scale water insects.” The high-resolution method could also be developed into convenient, low-cost, and effective weak-force surface measuring devices.

And don’t be surprised to see advanced bionic robots based on the locomotion principles of small insects in the near future — as soon as techniques to fabricate these structures and their control and powering systems can be developed.

The team is now working to “achieve locomotion principles of very small water-walking arthropods, such as water treaders with a length of about 1 mm,” he added. “We’re also exploring the minimum force resolution and accuracy of our method — it may be at the level of single molecular forces in piconewtons.”