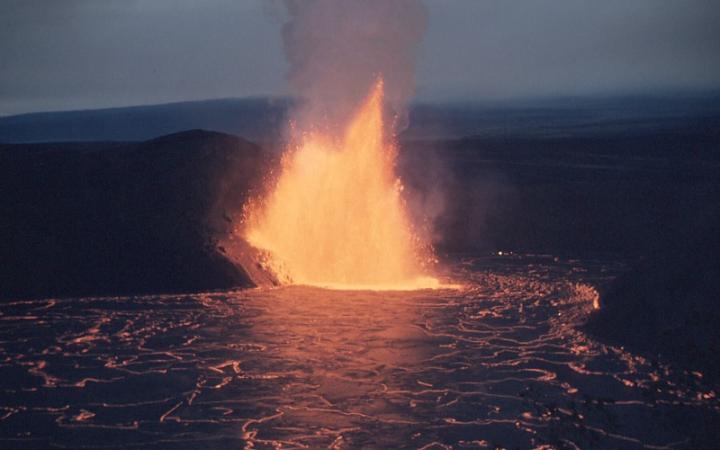 A fountain of lava erupts from Hawaii’s Kilauea Iki crater on Dec. 5, 1959. Two rock samples from this eruption contain geochemical anomalies that could date back 4.5 billion years, shortly after the Earth first formed. Credit: USGS/J.P. Eaton

Earth’s mantle is made of solid rock that nonetheless circulates slowly over millions of years. Some geologists assume that this slow circulation would have wiped away any geochemical traces of Earth’s early history long ago. But a new study led by University of Maryland geologists has found new evidence that could date back more than 4.5 billion years.

The authors of the research paper, published April 7 in the journal Science, studied volcanic rocks that recently erupted from volcanoes in Hawaii and Samoa. The rocks contain surprising geochemical anomalies–the “fingerprints” of conditions that existed shortly after the planet formed.

The researchers are not yet sure how Earth’s mantle preserved these anomalies. But the group’s results suggest that some of these rocks contain material that survived through all of Earth’s history–and that the planet’s interior may not be well mixed after all.

“We found geochemical signatures that must have been created nearly 4.5 billion years ago,” said Andrea Mundl, a postdoctoral researcher in geology at UMD and the lead author of the study. “It was especially exciting to find these anomalies in such young rocks. We don’t yet know how these signatures survived for so long, but we have some ideas.”

The anomalous signatures are found in the ratios of key isotopes of two elements: tungsten and helium.

In the case of tungsten, which has many isotopes, the important ratio is tungsten-182 to tungsten-184. The heavier isotope, tungsten-184, is stable and has existed since the planet first formed. Tungsten-182, on the other hand, results from the decay of hafnium-182, which is highly unstable. All naturally occurring hafnium-182 decayed within the first 50 million years of Earth’s history, leaving tungsten-182 in its place.

Tungsten and hafnium behaved very differently during the planet’s first 50 million years. Tungsten tends to associate with metals, so most of it migrated to Earth’s core, while hafnium, which tends to associate with silicate minerals, stayed in Earth’s mantle and crust. Most of the rocks on Earth have a similar ratio of tungsten-182 to tungsten-184, and this ratio serves as a global baseline. Geologists can learn a lot from rocks with an unusually high or low amount of tungsten-182–which indicates how much hafnium-182 was present in the rock long ago.

“Nearly all of these anomalies formed within the first 50 million years after the solar system formed,” Mundl said. “Higher than normal levels of tungsten-182 are seen in very old rocks that most likely contained a lot of hafnium long ago. But lower levels of tungsten-182 are rare, and resemble what we might expect to see deep beneath the surface, in or near the planet’s metallic core.”

Sure enough, Mundl and her colleagues observed an unusually low amount of tungsten-182 in some of the rocks from Hawaii and Samoa. On its own, the tungsten isotope ratio is interesting, but not enough to make any convincing conclusions. But the researchers also observed that the same rocks contain an unusual ratio of helium isotopes.

Helium-3 is extremely rare on Earth, and tends to show up in samples of rock that have not been melted or otherwise recycled since the planet first formed. Helium-4, on the other hand, can form from the radioactive decay of uranium and thorium. A higher than normal ratio of helium-3 to helium-4 typically indicates very old rocks that have not been significantly altered since the planet formed.

“Variations in the isotopic composition of helium have been long known, but have never been correlated with other geochemical parameters,” said Richard Walker, professor and department chair of geology at UMD and a co-author of the paper. “Rocks with high helium-3 to helium-4 ratios have commonly been speculated to contain ‘primitive’ mantle material, but how primitive was not known. Our tungsten data show that it is very primitive indeed, with the source region most likely forming within the first 50 million years of solar system history.”

Mundl, Walker and their co-authors suggest a few different scenarios that could have produced the tungsten and helium anomalies they observed in volcanic rocks from Hawaii and Samoa. Perhaps the volcanoes are drawing material from Earth’s core, where the ratios are expected to favor low tungsten-182 and high helium-3.

Alternatively, the rocky outer surface of the Earth might have formed in patches, with vast magma oceans in between. Parts of these magma oceans may have crystallized and sunk to the boundary between the mantle and the core, preserving the ancient tungsten and helium signatures.

“Each of these scenarios contain some inconsistencies that we can’t yet explain,” Mundl said. “But this is an exciting result that is sure to generate lots of interesting new research questions.”