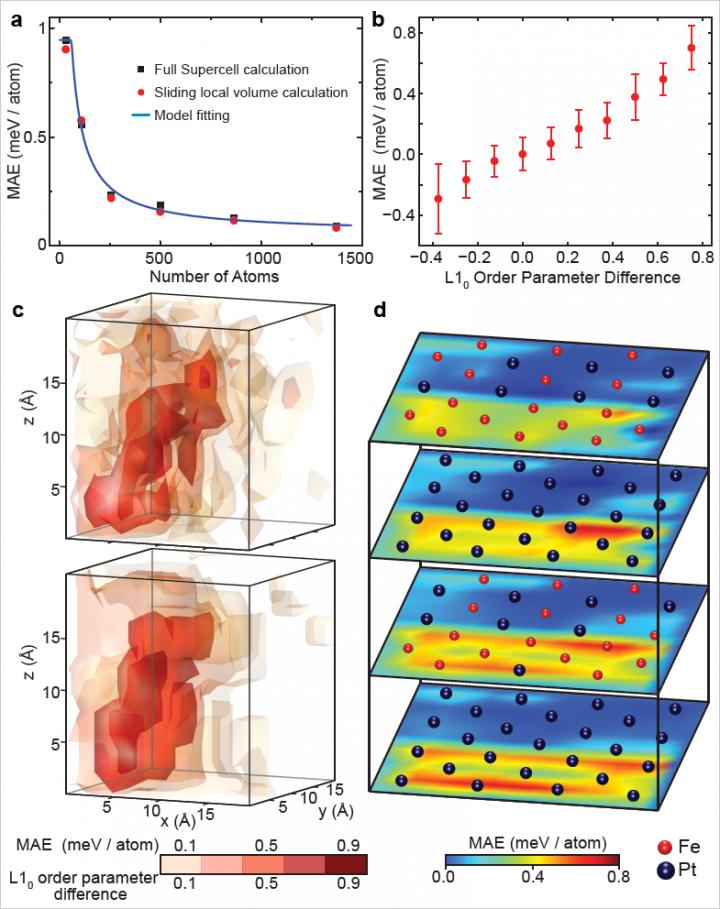 For the first time, researchers have simulated local magnetic anisotropy at the atomic level in a magnetic material based on experimental data. This figure shows changes in magnetic energy across individual iron and platinum atoms from an FePt nanoparticle. Source: Image courtesy of Markus Eisenbach and Nature.

Barely wider than a strand of human DNA, magnetic nanoparticles — such as those made from iron and platinum atoms — are promising materials for next-generation recording and storage devices like hard drives. Building these devices from nanoparticles should increase storage capacity and density, but understanding how magnetism works at the level of individual atoms is critical to getting the best performance.

However, magnetism at the atomic scale is extremely difficult to observe experimentally, even with the best microscopes and imaging technologies.

“These types of calculations have been done for ideal particles with ideal crystal structures but not for real particles,” said Markus Eisenbach, a computational scientist at the Oak Ridge Leadership Computing Facility (OLCF), a DOE Office of Science User Facility located at ORNL.

Eisenbach develops quantum mechanical electronic structure simulations that predict magnetic properties in materials. Working with Paul Kent, a computational materials scientist at ORNL’s Center for Nanophase Materials Sciences, the team collaborated with researchers at UCLA and Berkeley Lab’s Molecular Foundry to combine world-class experimental data with world-class computing to do something new–simulate magnetism atom by atom in a real nanoparticle.

Using the new data from the research teams on the West Coast, Eisenbach and Kent were able to precisely model the measured atomic structure, including defects, from a unique iron-platinum (FePt) nanoparticle and simulate its magnetic properties on the 27-petaflop Titan supercomputer at the OLCF.

Electronic structure codes take atomic and chemical structure and solve for the corresponding magnetic properties. However, these structures are typically derived from many 2-D electron microscopy or x-ray crystallography images averaged together, resulting in a representative, but not true, 3-D structure.

“In this case, researchers were able to get the precise 3-D structure for a real particle,” Eisenbach said. “The UCLA group has developed a new experimental technique where they can tell where the atoms are–the coordinates–and the chemical resolution, or what they are — iron or platinum.”

The results were published on February 2 in Nature.

Using a state-of-the-art electron microscope at Berkeley Lab’s Molecular Foundry, the Berkley Lab and UCLA teams measured multiple 2-D images from a single FePt nanoparticle at different orientations. UCLA researchers then used GENFIRE, a reconstruction algorithm they developed, to align 2-D images and reconstruct the 3-D atomic positions with cutting-edge precision. The nanoparticle they imaged was synthesized at the University of Buffalo.

“Our technique is called atomic electron tomography (AET) and enables the reconstruction of 3?D atomic structure in materials with 22-picometer precision,” said Jianwei (John) Miao of UCLA. A picometer is one-trillionth of a meter. “Like a CT scan, you take multiple images from samples and reconstruct them into a 3-D image.”

However, a CT scan is on the order of millimeters for medical diagnoses, whereas the UCLA team’s AET technique is measuring atom locations on the order of hundreds of picometers, or the space between atoms.

The UCLA team also developed algorithms to trace the positions of about 6,500 iron and 16,500 platinum atoms, revealing 3-D chemical disorder and other defects at the atomic level.

“We find that the atomic structure is much more complicated than people thought,” Miao said. “There were a lot of defects and imperfections in this iron-platinum nanoparticle.”

One of the defining characteristics of the FePt nanoparticle is the grouping of iron and platinum atoms into regions or “grains” divided by boundaries. Researchers wanted to understand how magnetism would differ across boundaries given that the ratio and order of iron and platinum atoms changes from grain to grain. Ultimately, magnetism from grain to grain could influence the performance of a magnetic storage device.

“The computational challenge was to demonstrate how magnetism is ordered in the real particle and understand how it changes between boundaries of differently ordered grains,” Eisenbach said.

Magnetism at the atomic level is driven by quantum mechanics — a fact that has shaken up classical physics calculations and called for increasingly complex, first-principle calculations, or calculations working forward from fundamental physics equations rather than relying on assumptions that reduce computational workload.

For magnetic recording and storage devices, researchers are particularly interested in magnetic anisotropy, or what direction magnetism favors in an atom.

“If the anisotropy is too weak, a bit written to the nanoparticle might flip at room temperature,” Kent said.

To simulate a supercell of about 1,300 atoms from strongly magnetic regions of the 23,000-atom nanoparticle, they used the Linear Scaling Multiple Scattering (LSMS) code, a first-principles density functional theory code developed at ORNL.

“The LSMS code was developed for large magnetic systems and can tackle lots of atoms,” Kent said.

As principal investigator on 2017, 2016, and previous INCITE program awards, Eisenbach has scaled the LSMS code to Titan for a range of magnetic materials projects, and the in-house code has been optimized for Titan’s accelerated architecture, speeding up calculations more than 8 times on the machine’s GPUs. Exceptionally capable of crunching large magnetic systems quickly, the LSMS code received an Association for Computing Machinery Gordon Bell Prize in high-performance computing achievement in 1998 and 2009, and developments continue to enhance the code for new architectures.

Working with Renat Sabirianov at the University of Nebraska at Omaha, the team also ran VASP, a simulation package that is better suited for smaller atom counts, to simulate regions of about 32 atoms.

“With both approaches, we were able to confirm that the local VASP results were consistent with the LSMS results, so we have a high confidence in the simulations,” Eisenbach said.

Computer simulations revealed that grain boundaries have a strong effect on magnetism. “We found that the magnetic anisotropy energy suddenly transitions at the grain boundaries. These magnetic properties are very important,” Miao said.

In the future, researchers hope that advances in computing and simulation will make a full-particle simulation possible — as first-principles calculations are currently too intensive to solve small-scale magnetism for regions larger than a few thousand atoms.

Also, future simulations like these could show how different fabrication processes, such as the temperature at which nanoparticles are formed, influence magnetism and performance.

“There’s a hope going forward that one would be able to use these techniques to look at nanoparticle growth and understand how to optimize growth for performance,” Kent said.