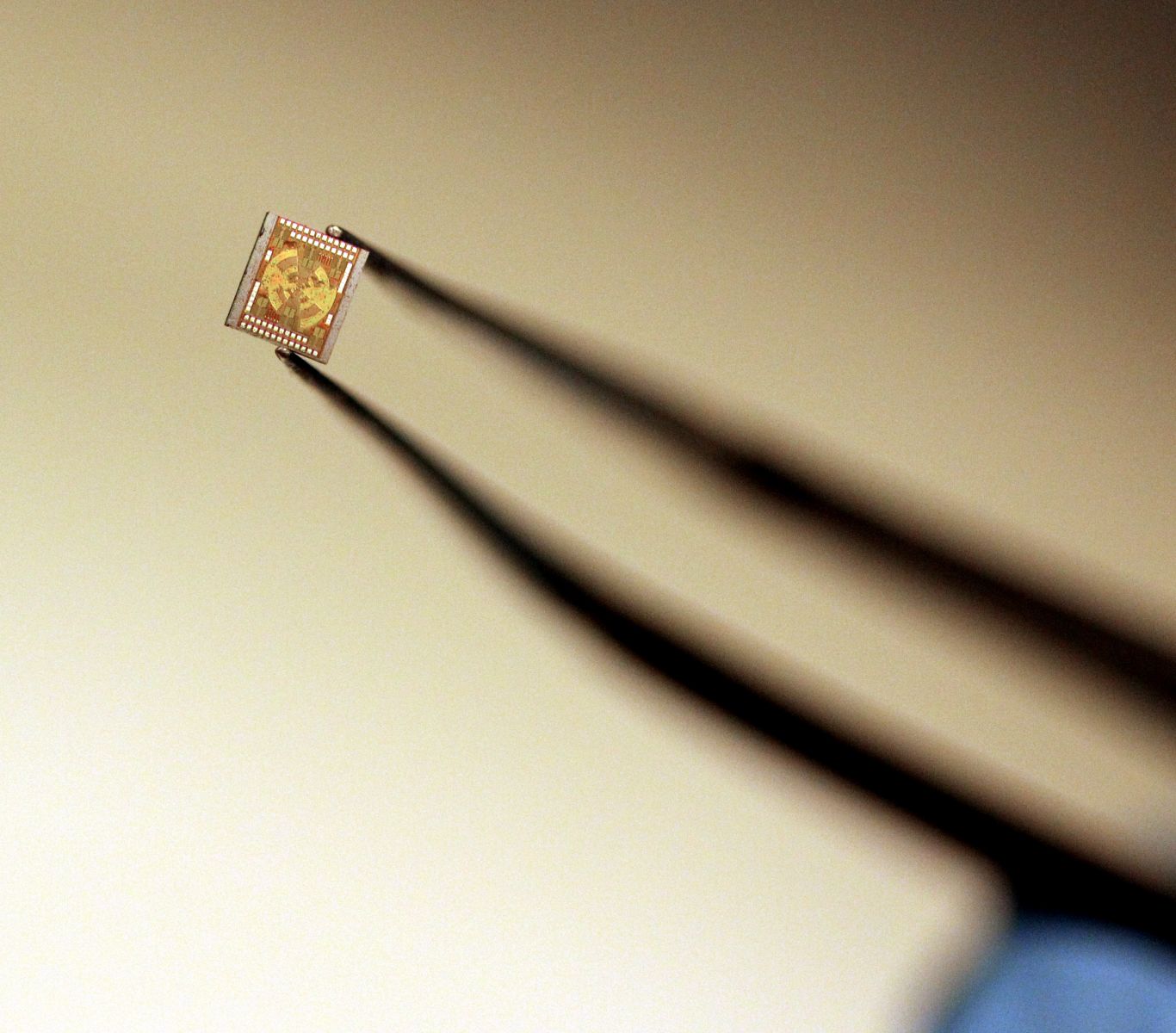 Princeton University researchers have drastically shrunk the equipment for producing terahertz — important electromagnetic pulses lasting one millionth of a millionth of a second — from a tabletop setup with lasers and mirrors to a pair of microchips small enough to fit on a fingertip (above). The simpler, cheaper generation of terahertz has potential for advances in medical imaging, communications and drug development. Credit: (Photos by Frank Wojciechowski for the Office of Engineering Communications

A new method to harvest terahertz waves— electromagnetic pulses which last one millionth of a millionth of a second—may be the key to advances in medical imaging, communications and drug development.

While utilizing these pulses previously required elaborate and expensive equipment, a research team at Princeton University believes they have drastically streamlined the process by moving from a tabletop setup with lasers and mirrors to a pair of microchips small enough to fit on a fingertip.

In a pair of studies, researchers developed one microchip that can generate terahertz waves and a second chip that can capture and read intricate details of the waves.

Lead researcher Kaushik Sengupta, a Princeton assistant professor of electrical engineering, explained some of the applications for the new chips.

“Instead of directly reading the waves, we are interpreting the patterns created by the waves,” Sengupta said in a statement. “It is somewhat like looking for a pattern of raindrops by the ripples they make in a pond.”

Terahertz waves interact in distinct ways with different chemicals, enabling them to be used to characterize specific substances. Known as spectroscopy, the ability to use light waves to analyze material is one of the most promising — and the most challenging — applications of terahertz technology, Sengupta said.

They also pass through most non-conducting material, so they could be used to look through clothing or boxes for security purposes or as an imaging tool for medical use. Because they have less energy than X-rays they don’t damage human tissue or DNA.

Terahertz waves are part of the electromagnetic spectrum, the broad class of waves that includes radio, X-rays and visible light.

They also sit between the microwave and infrared light wavebands.

Scientists at Princeton were able to shine a broad range of terahertz waves on a target and observe how the waves change after interacting with it.

When the terahertz waves interacted with a metal structure inside the chip, they created a complex distribution of electromagnetic fields that are unique to the incident signal.

These subtle fields are typically ignored, but the researchers opted to read the patterns as a sort of signature to identify the waves, accomplishing the entire process with tiny devices inside the microchip that read terahertz waves.

One challenge has been creating a wide range of wavelengths within the terahertz band, particularly in a microchip.

The researchers were able to overcome this by generating multiple wavelengths on the chip and then using precise timing to combine these wavelengths and create very sharp terahertz pulses.

Next the research team will extend the work farther along the terahertz band.

“What can you do with a billion transistors operating at terahertz frequencies?” Sengupta said. “Only by re-imagining these complex electromagnetic interactions from fundamental principles can we invent game-changing new technology