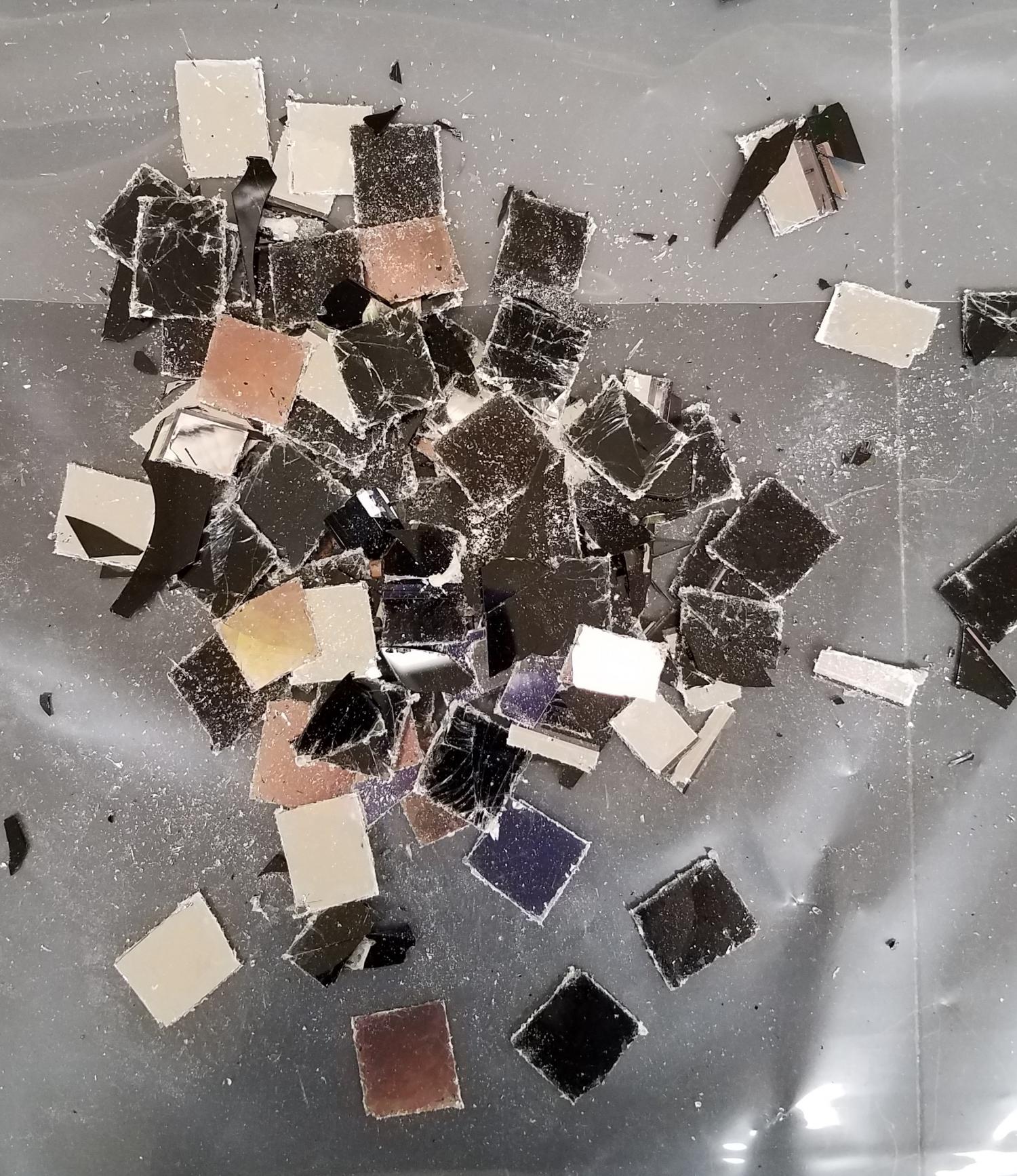 Quantum-dot-containing tablets and TVs were carved into small pieces and then placed into a simulated landfill to see whether the dots would leach into the environment. (Credit: Yuqiang Bi)

To improve viewing pleasure, companies have developed television—and tablet screens—that include quantum dots to enhance brightness and color. Some quantum dots are made with potentially harmful metals, which could leach into the environment when the device is discarded. But other TVs made with less hazardous nanomaterials require more energy to make. Today, researchers report preliminary results suggesting that under simulated landfill conditions, quantum dots can leach out of devices. But because this happens in such tiny amounts, the team says that in the grand scheme of things, it might make sense to use the more toxic quantum dots that are made with a more eco-friendly process.

The researchers will present their work today at the 254th National Meeting & Exposition of the American Chemical Society (ACS). ACS, the world’s largest scientific society, is holding the meeting here through Thursday. It features nearly 9,400 presentations on a wide range of science topics.

“In just the past decade, engineered nanomaterials have been incorporated into so many consumer products,” says Yuqiang Bi, Ph.D., a postdoctoral fellow in the laboratory of Paul Westerhoff, Ph.D. “The U.S. Environmental Protection Agency has funded us to assess these nanomaterials. They want to know how to predict and manage the risk from these substances.” Westerhoff adds, “This case study is one of several that consider the use, fate, transformations, release and potential human or ecological exposure to nanomaterials across the life cycle of nano-enabled consumer products.”

As a first step, the team needed to find the quantum dots. “Consumer electronics don’t list their ingredients like foods do,” says Bi, who is at Arizona State University. “We have to scavenge everything we can find to get ideas about how the electronics are manufactured and which consumer products actually have the nanomaterials.” The researchers scanned product information, on the internet and in stores, looking for tablets and televisions that boasted quantum dot technology. They took a few candidates back to the lab, where they disassembled the screens and looked for quantum dots.

Using mass spectrometry and X-ray fluorescence spectroscopy, the researchers identified a tablet containing cadmium quantum dots (namely cadmium selenide, or CdSe), a heavy metal that is toxic and carcinogenic, and a television with indium (namely indium phosphide, or InP) quantum dots. While indium is less toxic than cadmium, the indium nanomaterials require more energy to produce, so the question becomes whether the potential gain in safety is worth the expense of energy. “Just because a product has quantum dots doesn’t mean it poses a risk,” Bi says. “That depends on whether the quantum dots can get into the environment.”

As a test case, the researchers focused on what might happen to the products after being discarded. “In a landfill, a product’s contents are susceptible to leaching into its surroundings,” Bi says. “Rainfall in a landfill creates acidic solutions. The metals can get dissolved and, once dissolved, cadmium has a much greater potential to penetrate the groundwater.”

In the laboratory, the researchers simulated landfill water with an acidic chemical liquid, which “can smell a little bit bad,” Bi says. Next, the researchers set up three different test conditions. In the first, they put the naked material containing the quantum dots directly into the simulated landfill water. In the second, they carved up the television and tablet into 2-inch by 2-inch chunks. And in the third, they just submerged the entire intact devices in the acidic chemical liquid. After 18 hours in the funky smelling solution, the researchers tested the liquid to see how much cadmium and indium had leached into it and whether the materials were mostly in their solid quantum dot form or a more problematic ionic form. Based on their initial results, it seems the ionic form dominates for both types of quantum dots at low concentrations, which could suggest a lower environmental hazard than initially expected.

The researchers are still working to precisely quantify the exact amount of leached materials in the solutions. But based on studies done so far, Bi says, “we aren’t seeing huge amounts of leaching, especially when we are talking about realistic disposal methods, such as the chunked up electronics or whole product. If you dispose of a nice TV, we don’t expect too much release of the cadmium.” The released amount is on the order of nanograms per cubic centimeter, far less than the threshold that is considered dangerous.