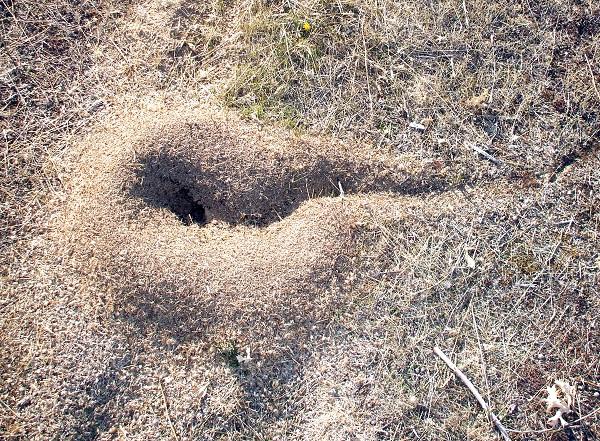 This is one of the active ant nests located in Somosaguas. Photo: O. Fesharaki

Ants of the species Messor barbarus modify the grain size and mineralogical composition of the soils they inhabit, influencing the results obtained in palaeoclimatic and palaeoenvironmental studies, according to research conducted by the Complutense University of Madrid (UCM), the National Museum of Natural Sciences (MNCN), the Institute of Geosciences (CSIC, UCM) and the Doñana Biological Station (CSIC).

“Innumerable studies over the past decades have shown that ants and other arthropods that act on the soil are authentic engineers and constantly modify their environment. In our study, we found that intensive action in a given area could affect petrological studies aimed at inferring palaeoclimates”, explained Omid Fesharaki, a researcher in the Department of Geodynamics, Stratigraphy and Palaeontology at the Complutense University of Madrid and one of the authors of the study, published in Catena.

Studies of past climatic conditions on Earth may be based on analyses of mineral typologies and proportions in sediments of a given age, because mineral associations largely depend on the stability of these, and therefore, on climatic characteristics such as temperature or the rate of precipitation.

Preferential selection by ants can alter these mineral associations and therefore distort the data obtained in palaeoclimatic studies. Consequently, when performing this type of climatic inference, it is important to take into account the bioturbatory action of ants or other insects.

The study, carried out at the palaeontological site of Somosaguas (Madrid), shows for the first time that these insects also transport fossil remains, paving the way for the use of this activity as a palaeontological prospecting technique to define fossiliferous sites.

“It’s a relatively cheap and easy technique which consists of studying ant nests under a magnifying glass or sifting them to find fossils in microvertebrate deposits or with slivers of macrovertebrate remains”, Fesharaki continued.

Another of the findings concerns the grains of soil transported. Previous studies have reported that ants select the sizes that most interest them for their constructions, but in the present study, the researchers also describe how they do this.

They found that this species of ant selects medium-sized rather than smaller or larger grains of soil, and prefers quartz over feldspar, probably in response to the criteria of mechanical stability and ease of transport.

“This may be because in their engineering work, they are capable of identifying which soil grain sizes and mineral compositions will endow greater stability to the structures they build, and therefore they discard the rest and remove it from the nest”, speculated Fesharaki.

The techniques employed in this study included petrographic counts under a microscope to compare the mineralogical composition of modified sediments in ant nests with that of sediments that had not been modified by these insects, sifting or observation under a magnifying glass of fossil remains and analyses of soil grain size in nests for comparison with previous data.