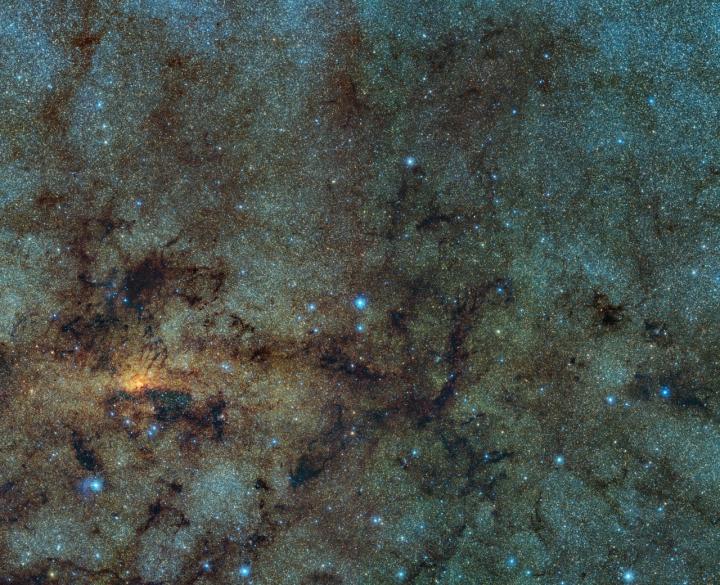 This image, captured with the VISTA infrared survey telescope, as part of the Variables in the Via Lactea (VVV) ESO public survey, shows the central part of the Milky Way. While normally hidden behind obscuring dust, the infrared capabilities of VISTA allow to study the stars close to the galactic center. Within this field of view astronomers detected several ancient stars, of a type known as RR Lyrae. As RR Lyrae stars typically reside in ancient stellar populations over 10 billion years old, this discovery suggests that the bulging center of the Milky Way likely grew through the merging of primordial star clusters. Source: ESO/VVV Survey/D. Minniti

A team led by Dante Minniti (Universidad Andrés Bello, Santiago, Chile) and Rodrigo Contreras Ramos (Instituto Milenio de Astrofísica, Santiago, Chile) used observations from the VISTA infrared survey telescope, as part of the Variables in the Via Lactea (VVV) ESO public survey, to carefully search the central part of the Milky Way. By observing infrared light, which is less affected by cosmic dust than visible light, and exploiting the excellent conditions atESO’s Paranal Observatory, the team was able to get a clearer view of this region than ever before. They found a dozen ancient RR Lyrae stars at the heart of the Milky Way that were previously unknown.

Our Milky Way has a densely populated centre — a feature common to many galaxies, but unique in that it is close enough to study in depth. This discovery of RR Lyrae stars provides compelling evidence that helps astronomers decide between two main competing theories for how these bulges form.

RR Lyrae stars are typically found in dense globular clusters. They are variable stars, and the brightness of each RR Lyrae star fluctuates regularly. By observing the length of each cycle of brightening and dimming in an RR Lyrae, and also measuring the star’s brightness, astronomers can calculate its distance [1].

Unfortunately, these excellent distance-indicator stars are frequently outshone by younger, brighter stars and in some regions they are hidden by dust. Therefore, locating RR Lyrae stars right in the extremely crowded heart of the Milky Way was not possible until the public VVV survey was carried out using infrared light. Even so, the team described the task of locating the RR Lyrae stars in amongst the crowded throng of brighter stars as “daunting”.

Their hard work was rewarded, however, with the identification of a dozen RR Lyrae stars. Their discovery indicate that remnants of ancient globular clusters are scattered within the centre of the Milky Way’s bulge.

Rodrigo Contreras Ramos elaborates: “This discovery of RR Lyrae Stars in the centre of the Milky Way has important implications for the formation of galactic nuclei. The evidence supports the scenario in which the bulge was originally made out of a few globular clusters that merged.”

The theory that galactic bulges form through the merging of globular clusters is contested by the competing hypothesis that these bulges are actually due to the rapid accretion of gas. The unearthing of these RR Lyrae stars — almost always found in globular clusters — isvery strong evidence that the Milky Way bulge did in fact form through merging. By extension, all other similar galactic bulges may have formed the same way.

Not only are these stars powerful evidence for an important theory of galactic evolution, they are also likely to be over 10 billion years old — the dim, but dogged survivors of perhaps the oldest and most massive star cluster within the Milky Way.