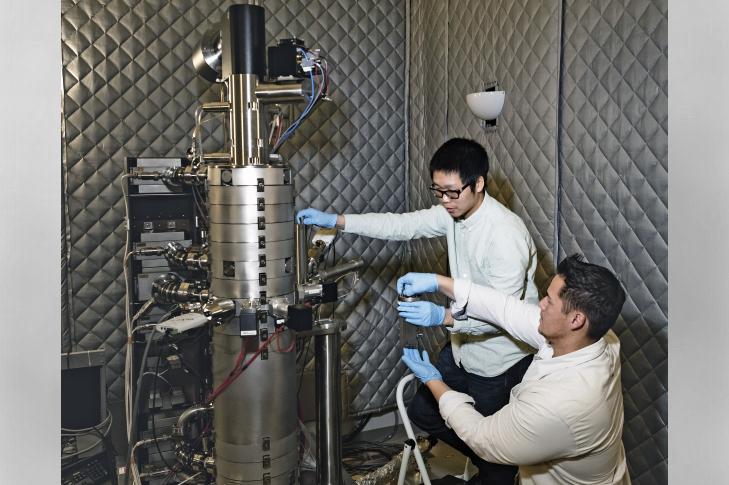 Researchers have long sought electrically conductive materials for economical energy-storage devices. Two-dimensional (2D) ceramics called MXenes are contenders. Unlike most 2D ceramics, MXenes have inherently good conductivity because they are molecular sheets made from the carbides and nitrides of transition metals like titanium.

MXenes were co-discovered by Michael Naguib, now a Wigner Fellow at the Department of Energy’s Oak Ridge National Laboratory, while pursuing his PhD at Drexel University in 2011. MXene layers can be combined to engineer ultrathin electronics, sensors, batteries, supercapacitors and catalysts. About 20 MXenes have since been reported.

“Atomic-level defects can be engineered into materials to enable new functionalities,” said senior author Raymond Unocic of CNMS. “Understanding these defects is critical for advancing materials.”

Atomic imaging from different perspectives was the key to revealing MXene’s structure. When the sample is aligned with the electron beam within a STEM instrument, the viewer cannot tell how many sheets lie under the top layer. But simply tilt the sample, and differences readily appear. For example, a multi-sheet layer is made of stacked atoms, a structure that forms a blurred image when the layer is tilted. The appearance of sharp atomic images under different tilting conditions unambiguously proved the single-layer structure of the MXene.

MXenes are made from a three-dimensional (3D) bulk crystal called MAX (the “M” denotes a transition metal; “A,” an element, such as aluminum or silicon, from a specific chemical group; and “X,” either carbon or nitrogen). In the MAX lattice from which the MXene explored in this study emerged, three layers of titanium carbide are sandwiched between aluminum layers.

The Drexel researchers improved a technique developed in 2011 and altered in 2014 to synthesize MXene from the bulk MAX phase using acids. The improved method is called minimally intensive layer delamination, or MILD. “By going with MILD, we ended up with large flakes of high-quality MXene,” said Mohamed Alhabeb, a PhD student in materials science at Drexel University, who accomplished this feat with another PhD student, Katherine Van Aken, under the leadership of one of the co-discoverers of MXenes, Distinguished University Professor and Director of the A.J. Drexel Nanomaterials Institute Yury Gogotsi.

To synthesize free-standing MXene flakes, the Drexel team first treated bulk MAX with an etchant of fluoride salt and hydrochloric acid to selectively remove unwanted layers of aluminum from between titanium carbide layers. Then they manually shook the etched material to separate and collect the titanium carbide layers. Each layer is five atoms thick and is made of carbon atoms binding three titanium sheets. Etching and exfoliating MAX produces many of these free-standing MXene layers. This relatively simple technique may enable manufacturing-scale production.

Etching creates defects—vacant spaces that emerge as titanium atoms are pulled from surfaces. “Defects” are actually good in many applications of materials. They can be introduced into a material and manipulated to enhance its useful catalytic, optical or electronic properties.

The greater the concentration of etchant, the larger the number of defects created, the study found. “We have the capability to tune the defect concentration, which could be used to tailor physicochemical properties for energy storage and conversion devices,” Sang said.

Moreover, the number of defects did not strongly affect MXene’s electrical conductivity. At CNMS, Ming-Wei Lin and Kai Xiao measured physical properties, including electrical conductivity, of various promising 2D materials. They found MXene was an order of magnitude less conductive than a perfect graphene sheet but two orders of magnitude more conductive than metallic molybdenum disulfide.

Next the researchers plan to tune defects down to the atomic level to tailor specific behaviors.