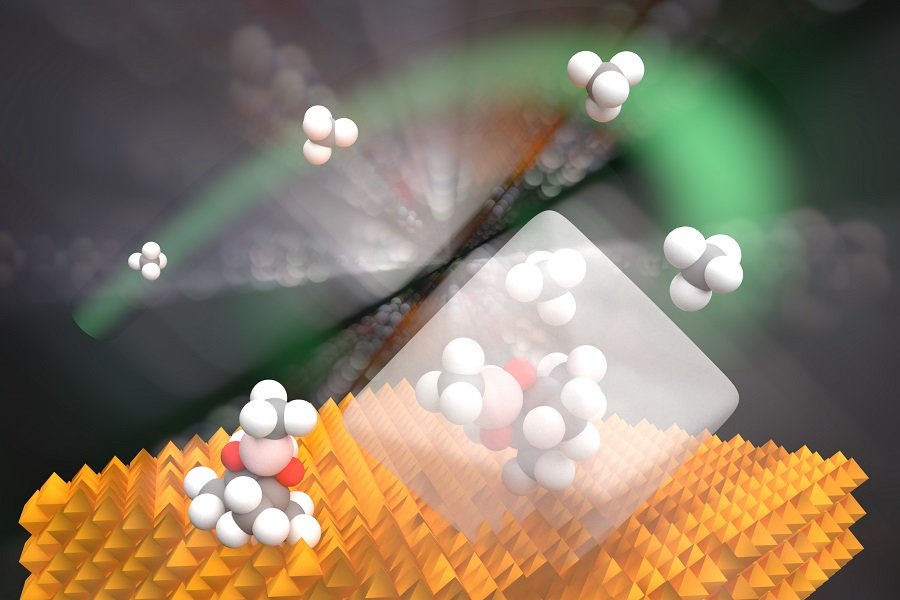 This image depicts the selective functionalization of methane molecules, a chemical process that makes them more technologically desirable. The methane molecules are shown as one gray carbon atom connected to four white hydrogen atoms. The orange crystals at bottom represent the metal-organic frameworks in which the reaction takes place. Credit: Xuan Zhang, Northwestern University

The nation’s shale gas production boom of recent years has led many researchers to look for new ways to functionalize methane — i.e., transform it into something more valuable. One such product could be methanol.

“There are a lot of ways to functionalize methane, but one form that would be cost effective and abundant is the transformation of methane to methanol,” said Max Delferro, the catalysis science program group leader at the U.S. Department of Energy’s (DOE) Argonne National Laboratory. “Unfortunately, methane is one of the most stable molecules. It’s difficult to activate methane.”

But now, a team led by Delferro and Omar Farha, associate professor of chemistry at Northwestern University, has demonstrated a new way to activate methane with MOFs, as a result of their joint efforts in the Inorganometallic Catalyst Design Center, a DOE-funded Energy Frontier Research Center. They and seven co-authors recently published their method in Nature Catalysis.

“This example showcases how designing crystalline materials, in particular MOFs, will lead to solutions of complex but exciting opportunities,” said Farha, who is also president and co-founder of NuMat Technologies.

A methane molecule consists of one carbon atom linked to four hydrogen atoms. But functionalizing carbon-hydrogen bonds in methane is a particularly challenging process that most known catalysts can achieve only under extremely acidic and/or oxidizing conditions.

The Argonne-Northwestern team, however, has shown for the first time that MOFs can selectively produce a specific boron-infused methane product by shape-selective catalysis, a widely used industrial technique for chemicals synthesis and hydrocarbon processing. Shape-selective catalysis can distinguish between molecules that are slightly different in size and may selectively form only one desired chemical product. But for the technique to work, the pore space of the catalyst must be comparable to the size of the molecules involved in the reaction.

Since the 1960s, zeolites have been commonly used to perform this type of catalysis. Zeolites are microporous crystalline minerals that often include silicon, aluminum and oxygen. They are commonly used as commercial adsorbents and catalysts and have a cage-like framework in which reactant molecules can become trapped. But if the molecules are too big to fit inside the framework, no catalysis can occur.

In MOFs, organic molecules and metal oxide clusters serve as the links and nodes, respectively. MOFs are attractive candidates for performing shape-selective catalysis because they are structurally tunable, noted lead author Xuan Zhang of Northwestern and his colleagues in the Nature Catalysisarticle. Unlike zeolites, they can be synthesized with pore and aperture sizes tailor-made for targeted molecules.

“Max Delferro and Omar Farha are excellent scientists who benefit from the infrastructure offered by the Inorganometallic Catalyst Design Center to perform state-of-the-art research that will advance the knowledge and the economy of our nation,” said Laura Gagliardi, director of the Inorganometallic Catalyst Design Center, based at the University of Minnesota.

The researchers drew inspiration for this work from two papers published back-to-back in the March 25, 2016, issue of Science, by teams at the University of Michigan and the University of Pennsylvania. Those teams showed how they could introduce a boron-based compound, in a process called borylation, and offer a promising route for methane activation under milder chemical conditions than would otherwise be possible.

The Michigan and Pennsylvania teams separately observed the borylation process yielding products that were both monoborylated (technologically valuable) and bisborylated (undesired). But by inserting an iridium-based catalyst (synthesized at Northwestern) inside the MOFs, the Argonne-Northwestern team was able to produce a reaction that formed only the monoborylated product; the pores of the MOFs were too small for the bisborylated product to form.

In the next phase of their research, Delferro and Farha will attempt to activate methane with the same chemistry, but they will substitute Earth-abundant metals such as iron, cobalt, nickel and copper for iridium, which is rare and expensive.

“We’re excited about the future for this chemistry,” Delferro said. “If we can do the same chemistry with iron, then we’re really in business.”

This work was supported as part of the Inorganometallic Catalyst Design Center, an Energy Frontier Research Center funded by the U.S. Department of Energy, Office of Science, Basic Energy Sciences. Use of the APS was also supported by the DOE, Office of Science. Operations of the Materials Research Collaborative Access Team at the APS are supported by the DOE and the MR-CAT member institutions. MR-CAT is a partnership of three universities (University of Notre Dame, University of Florida and the Illinois Institute of Technology), two Argonne divisions (Chemical Sciences and Engineering as well as Biosciences), the U.S. Environmental Protection Agency and two companies (BP and Honeywell UOP).