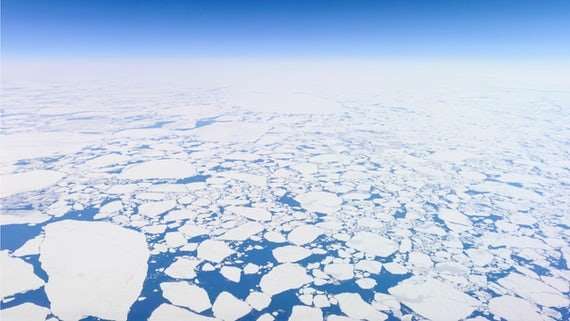 Researchers from Cardiff University have revealed how sea ice has been contributing to the waxing and waning of ice sheets over the last million years.

In a new study published in the journal Nature Communications, the team have shown for the first time that ice ages, occurring every 100,000 years, are accompanied by a rapid build-up of sea ice in the Earth’s oceans.

Our planet’s ice ages used to occur at intervals of every 40,000 years, which made sense to scientists as the Earth’s seasons vary in a predictable way, with colder summers occurring at these intervals. However there was a point, about a million years ago, called the ‘Mid-Pleistocene transition’, in which the ice age intervals changed from every 40,000 years to every 100,000 years.

The reason why ice ages occur at these timescales has been a mystery to scientists for a long time.

By tracking molecules produced by tiny marine algae preserved in ocean sediments, the team have been able to reconstruct sea-ice conditions during the Mid-Pleistocene transition.

Their results showed that at the same time as the cycles of ice ages changed from 40,000 years to 100,000 years there was a distinct increase in sea ice extent and a change in the rhythm of sea ice build-up across climate cycles.

“Prior to the Mid-Pleistocene transition, sea ice build-up and decay during ice ages was more gradual, whereas in the late Pleistocene, when the cyclicity of ice ages changed, we observed conditions characterised by a prominent short-lived peak in sea ice extent during late ice ages,” said Henrieka Detlef, a postgraduate researcher at Cardiff University School of Earth and Ocean Sciences who led the study.

With less water evaporating into the atmosphere, there would be less moisture being transported to continental glaciers which, in turn, would cause them to retreat and help in the transition from an ice age to a warm period.

“It’s clear that sea ice plays a fundamental role in the transition from an ice age into a warm stage every 100,000 years,” Detlef continued.