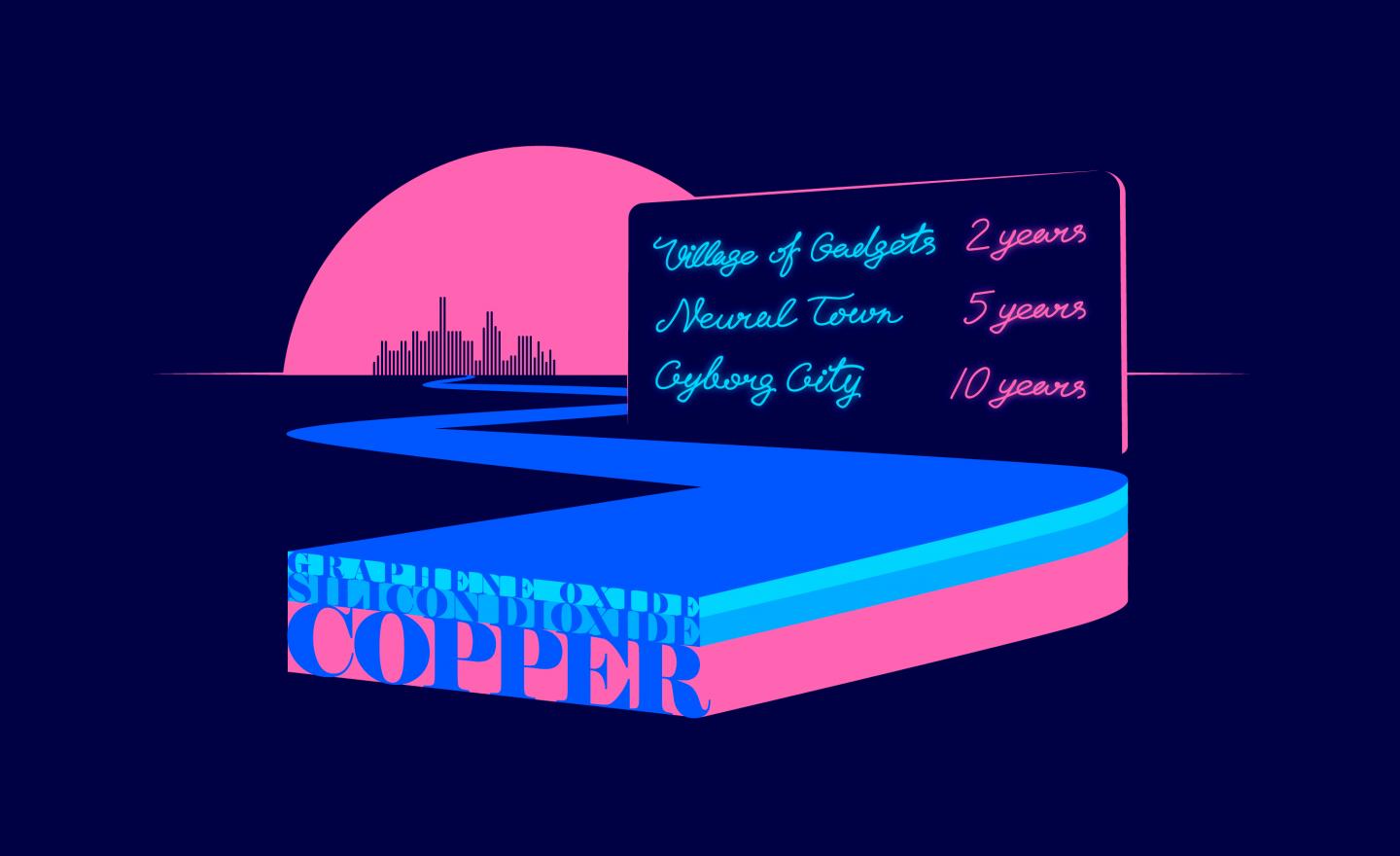 Biosensor chips based on copper and graphene oxide are the future of many technologies. Credit: Lion_on_Helium/MIPT Press Office

Russian researchers from the Moscow Institute of Physics and Technology have developed biosensor chips of unprecedented sensitivity, which are based on copper instead of the conventionally used gold. Besides making the device somewhat cheaper, this innovation will facilitate the manufacturing process. The research findings are reported in the journal Langmuir, named in honor of Irving Langmuir -- a U.S. scientist awarded the 1932 Nobel Prize in chemistry "for his discoveries and investigations in surface chemistry."

Biosensor chips are used by pharmaceutical companies to develop drugs. These chips are also indispensable for studying the kinetics of molecular interactions. Furthermore, they could serve as a basis for various kinds of chemical analyzers used to find molecules indicating a disease and to detect hazardous substances in food or the environment, including leaks from chemical plants, among other things.

The Russian research team from the Laboratory of Nanooptics and Plasmonics of MIPT's Center for Photonics and 2D Materials has developed a sensing chip based on unconventional materials: copper and graphene oxide. As a result, their device achieves unmatched sensitivity, and yet its configuration is mostly standard and therefore compatible with existing commercial biosensors, e.g., such as Biacore, Reichert, BioNavis, or BiOptix.

"Our engineering solution is an important step towards developing biological sensors based on photonic and electronic technology," says Valentyn Volkov, professor of the University of Southern Denmark, who also heads the Laboratory of Nanooptics and Plasmonics at MIPT. "By relying on standard manufacturing technologies and combining copper with graphene oxide -- a material that has a great potential -- we achieve a demonstrably high efficiency. This opens up new avenues for biosensor development."

The most common material used in optoelectronics and photonics is gold. Nearly all commercial biosensor chips incorporate gold films several tens of nanometers thick -- a nanometer is one billionths of a meter. The reason gold is so ubiquitous is that it has excellent optical properties and is chemically very stable. But even gold is not perfect. For one thing, it is expensive -- specifically, high-purity gold costs over 25 times as much as high-purity copper. Also, gold is incompatible with the industrial processes used for manufacturing microelectronics, which severely limits its potential for application in device mass production.

Unlike gold, copper does not have these flaws. Its optical properties are on par with those of gold. Copper is used as an electrical conductor in microelectronics. However, it suffers from oxidation, or corrosion, and therefore has not been used in biochips. Now, MIPT researchers have solved this problem by covering the metal with a 10-nanometer dielectric layer. In addition to preventing oxidation, this altered the optical properties of the chip, making it more sensitive.

To further refine their biosensor design, the authors added a graphene oxide layer on top of the copper and dielectric films, enabling unprecedented sensitivity. This third material was originally obtained in 1859 as graphite oxide by Oxford University professor Benjamin C. Brodie Jr., a renowned English chemist. Later on, graphene oxide experienced a sort of a revival following the discovery of graphene -- the first known two-dimensional material -- by Russian-born University of Manchester physicists and MIPT graduates Andre Geim and Konstantin Novoselov. The work on graphene earned them the 2010 Nobel Prize in physics. Graphene oxide can be visualized as graphene -- a one-dimensional sheet of carbon atoms bound in a honeycomb arrangement -- with oxygen-containing groups dangling from some of the carbon atoms. These groups provide a link between the device surface and the protein molecules that are analyzed. In an earlier study, the authors used graphene oxide to increase the sensitivity of standard gold-based biosensors. The material proved to be beneficial for copper sensors as well.

Replacing gold with copper opens up the way for developing compact biosensing devices to be implemented in smartphones, portable gadgets, wearable devices, and smart clothes, because copper-based chips are compatible with conventional microelectronics technology. Scientists from across the world and electronics industry giants such as IBM and Samsung are putting a lot of effort into creating compact biosensors that could be built into electronic devices just like the present-day nano- and microelectromechanical motion sensors -- accelerometers and gyroscopes. It is hard to overestimate the impact that biosensors would have -- suffice to say that our devices would acquire a new sense organ. And this is not merely a metaphor: Major corporations are working on technologies to enable AI, intelligent gadgets, and biointerfaces that would serve as mediators between the human brain and a computer. A combination of these technologies could give rise to real cybernetic organisms.

"It is known that copper is susceptible to the corrosive influence of the environment. We have shown that protective dielectric films only tens of nanometers thick do more than just prevent oxidation: In some cases, they increase biosensor sensitivity," says Yury Stebunov, the lead author of the paper and co-founder and CEO of GrapheneTek LLC. "We don't see purely fundamental research as the final destination. Our solution will be available to potential customers before the end of the year. The technologies proposed in this study could be used to create miniature sensors and neural interfaces, and that's what we're working on right now."