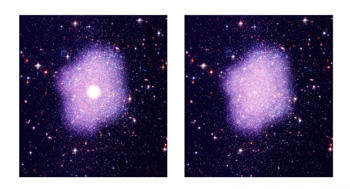 Scientists behind XENON1T, the largest dark matter experiment of its kind ever built, are encouraged by early results, describing them as the best so far in the search for dark matter.

Dark matter is one of the basic constituents of the universe, five times more abundant than ordinary matter. Several astronomical measurements have corroborated the existence of dark matter, leading to an international effort to observe it directly. Scientists are trying to detect dark matter particle interacting with ordinary matter through the use of extremely sensitive detectors. Such interactions are so feeble that they have escaped direct detection to date, forcing scientists to build detectors that are more and more sensitive and have extremely low levels of radioactivity.

On May 18, the XENON Collaboration released results from a first, 30-day run of XENON1T, showing the detector has a record low radioactivity level, many orders of magnitude below surrounding material on earth.

“The care that we put into every single detail of the new detector is finally paying back,” said Luca Grandi, assistant professor in physics at the University of Chicago and member of the XENON Collaboration. “We have excellent discovery potential in the years to come because of the huge dimension of XENON1T and its incredibly low background. These early results already are allowing us to explore regions never explored before.”

The XENON Collaboration consists of 135 researchers from the United States, Germany, Italy, Switzerland, Portugal, France, the Netherlands, Israel, Sweden and the United Arab Emirates, who hope to one day confirm dark matter’s existence and shed light on its mysterious properties.

Located deep below a mountain in central Italy, XENON1T features a 3.2-ton xenon dual-phase time projection chamber. This central detector sits fully submersed in the middle of the water tank, in order to shield it from natural radioactivity in the cavern. A cryostat helps keep the xenon at a temperature of minus-95 degrees Celsius without freezing the surrounding water. The mountain above the laboratory further shields the detector, preventing it from being perturbed by cosmic rays.

But shielding from the outer world is not enough, since all materials on Earth contain tiny traces of natural radioactivity. Thus extreme care was taken to find, select and process the materials making up the detector to achieve the lowest possible radioactive content. This allowed XENON1T to achieve record “silence” necessary to detect the very weak output of dark matter.

A particle interaction in the one-ton central core of the time projection chamber leads to tiny flashes of light. Scientists record and study these flashes to infer the position and the energy of the interacting particle—and whether it might be dark matter.

Despite the brief 30-day science run, the sensitivity of XENON1T has already overcome that of any other experiment in the field probing unexplored dark matter territory.

“For the moment we do not see anything unexpected, so we set new constraints on dark matter properties,” Grandi said. “But XENON1T just started its exciting journey and since the end of the 30-day science run, we have been steadily accumulating new data.”

Grandi’s group is very active within XENON1T, and it is contributing to several aspects of the program. After its initial involvement in the preparation, assembly and early operations of the liquid xenon chamber, the group shifted its focus in the last several months to the development of the computing infrastructure and to data analysis.

“Despite its low background, XENON1T is producing a large amount of data that needs to be continuously processed,” said Evan Shockley, a graduate student working with Grandi. “The raw data from the detector are directly transferred from Gran Sasso Laboratory to the University of Chicago, serving as the unique distribution point for the entire collaboration.”

The framework, developed in collaboration with a group led by Robert Gardner, senior fellow at the Computation Institute, allows for the processing of data, both on local and remote resources belonging to the Open Science Grid. The involvement of UChicago’s Research Computing Center including Director Birali Runesha allows members of the collaboration all around the world to access processed data for high-level analyses.

Grandi’s group also has been heavily involved in the analysis that led to this first result. Christopher Tunnell, a fellow at the Kavli Institute for Cosmological Physics, is one of the two XENON1T analysis coordinators and corresponding author of the result. Recently, UChicago hosted about 25 researchers for a month to perform the analyses that led to the first results.

“It has been a large, concentrated effort and seeing XENON1T back on the front line makes me forget the never-ending days spent next to my colleagues to look at plots and distributions,“ Tunnell said. “There is no better thrill than leading the way in our knowledge of dark matter for the coming years.”