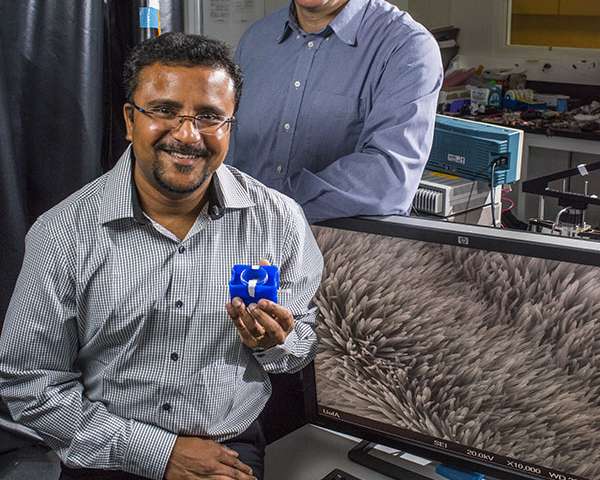 Vakhtang Putkaradze and Arindam Phani (seated), along with Thomas Thundat, have created a resonator with nanoscale features to detect dangerous chemicals in the environment. (Credit: University of Alberta)

Inspired by the anatomy of insects, an interdisciplinary research team at the University of Alberta has come up with a novel way to quickly and accurately detect dangerous airborne chemicals.

The work started with Arindam Phani, a graduate student in U of A’s Department of Chemical and Materials Engineering, who observed that most insects have tiny hairs on their body surfaces, and it is not clear what the hairs are for. Trying to make sense of what these hairs may be capable of, Phani designed experiments involving a “forest” of tiny hairs on a thin vibrating crystal chip, under the guidance of his academic advisor Thomas Thundat, the Canada Research Chair in Oil Sands Molecular Engineering. The two joined forces with Vakhtang Putkaradze, Centennial Professor in the University of Alberta’s Department of Mathematical and Statistical Sciences.

The experiments and subsequent theoretical explanation formed the crux of a new study published in the Sept. 6 issue of Scientific Reports, an online, open access journal from the publishers of Nature.

“We wanted to do something that nobody else does,” said Putkaradze, a mathematician who is also a renowned expert in the field of mechanics. “When using resonators as sensors, most people want to get rid of dissipation or friction because it’s considered highly undesirable, it tends to obscure what you are trying to measure. We have taken that undesirable thing and made it useful.”

“Sensing chemicals without chemical receptors has been a challenge in normal conditions,” said Thundat, a world-leading expert in the field of sensing. “We realized that there is a wealth of information contained in the frictional loss of a mechanical resonator in motion and is more pronounced at the nanoscale.”

The idea is that any object moving rapidly through the air can probe the properties of the surrounding environment. Imagine having a wand in your hand and moving it back and forth, and—even with your eyes closed—you can feel whether the wand is moving through air, water, or honey, just by feeling the resistance. Now, picture this wand with billions of tiny hairs on it, moving back and forth several million times per second, and just imagine the sensing possibilities.

“With the nanostructures, we can feel tiny changes in the air surrounding the resonator,” says Putkaradze. “This sensitivity makes the device useful for detecting a wide variety of chemicals.”

Phani, who is the first author on the publication, believes “similar mechanisms involving motions of nano-hairs may be used for sensing by living organisms.” Because the friction is changing dramatically with minute changes in the environment and is easy to measure, it may be possible to eventually produce a gadget of the size similar to or slightly larger than a Rubik’s cube and designed to plug into a wall.

At present, the group’s device is geared primarily to sensing chemical vapors in air.

“We are thinking that this device can work like a smaller and cheaper spectrometer, measuring chemicals in the parts-per-million range,” added Putkaradze.

Putkaradze explains that, apart from size and reasonable cost, what sets the device apart from larger and more expensive equipment is its versatility. “Because our sensor is not directed to detect any specific chemical, it can interpret a broad range, and it doesn’t require that we actually attach the molecules to anything to create a mechanical response, meaning that it’s also reusable.”

The team adds that the most immediate and obvious use will be for environmental air quality monitoring. Concluded Putkaradze, “we would like to work with applications like law enforcement and scientific laboratories, but the most obvious use is for environmental observation of chemical air pollution in cities and the resource industry.”

Future iterations are geared toward detecting particulate matter—like dust—as well as the number of viruses present in air, invaluable for the public health.