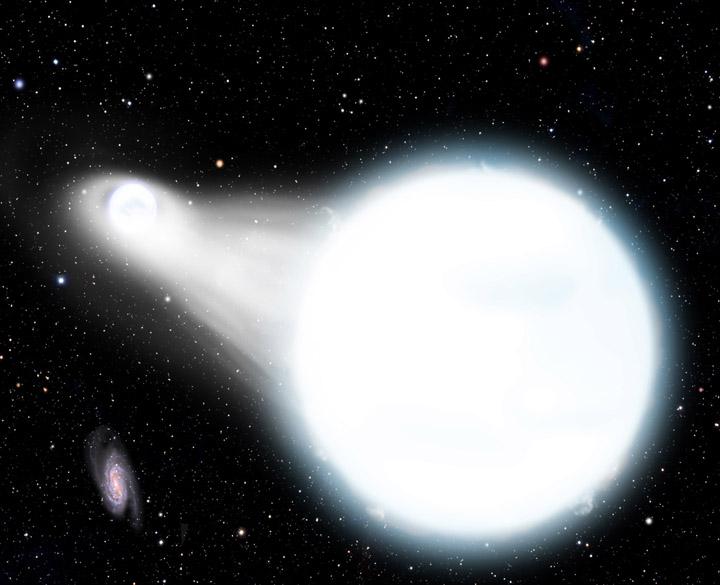 Mukremin Kilic, OU astrophysicist, and team have discovered two detached, eclipsing double white dwarf binaries with orbital periods of 40 and 46 minutes, respectively. Only a handful of white dwarf binaries are know with orbital periods less than one hour in our galaxy and most were discovered by Kilic and colleagues. Credit: University of Oklahoma

A University of Oklahoma astrophysicist, Mukremin Kilic, and his team have discovered two detached, eclipsing double white dwarf binaries with orbital periods of 40 and 46 minutes, respectively. White dwarfs are the remnants of Sun-like stars, many of which are found in pairs, or binaries. However, only a handful of white dwarf binaries are known with orbital periods less than one hour in the Milky Way — a galaxy made up of two hundred billion stars — and most have been discovered by Kilic and his colleagues.

Kilic, an astrophysics professor in the Homer L. Dodge Department of Physics and Astronomy, with OU graduate students Alekzander Kosakowski and A. Gianninas, and collaborator Warren R. Brown, Smithsonian Astrophysical Observatory, discovered the two white dwarf binaries using the MMT 6.5-meter telescope, a joint facility of the Smithsonian Institution and the University of Arizona. Observations at the Apache Point Observatory 3.5-meter telescope revealed that one of the binaries is eclipsing, only the seventh known eclipsing white dwarf binary.

In the future, Kilic and his team will watch in real time as the stars eclipse to measure how they are getting closer and closer–a sign they will likely merge. What occurs when the white dwarfs make contact continues to be a mystery at this point. One possibility is an explosion–a phenomenon known as a supernova. Kilic predicts these two stars will come together and create an “exotic star,” known as R Coronae Borealis. These stars are often identified for their spectacular declines in brightness at irregular intervals. There are only about 65 R Coronae Borealis stars known in our galaxy.

“The existence of double white dwarfs that merge in 20 to 35 million years is remarkable,” Brown said. “It implies that many more such systems must have formed and merged over the age of the Milky Way.”