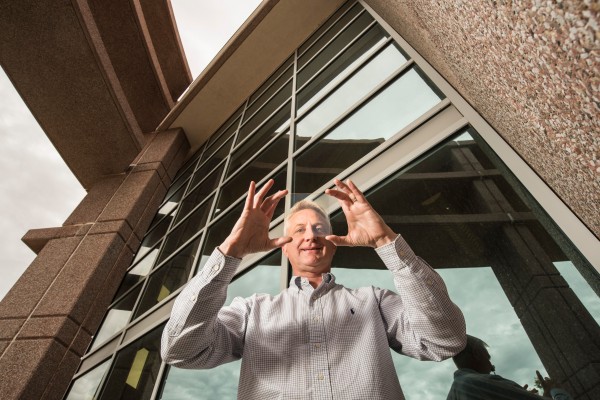 Sandia National Laboratories materials physicist Paul Clem holds a sample of nanoparticle coated glass. Thermochromic nanoparticles switch from infrared transparent to infrared reflective when they heat up, which will help to keep office buildings, homes and even cars cool.

It is a truth acknowledged throughout much of the world, that a car sitting in the sun on a summer’s day must be sweltering. However, a partnership between Sandia National Laboratories and Santa Fe, New Mexico-based IR Dynamics may soon challenge that truth.

Together they are turning nano-size particles that reflect heat, or infrared radiation, into window films for offices, houses, even cars.

The partnership started in 2013 with the help of a New Mexico Small Business Assistance, or NMSBA, grant. Paul Clem, a Sandia materials physicist, was studying films 50 times thinner than a human hair that switch from insulators that block electricity to metals that conduct electricity, depending on the temperature. Clem was looking at their possible use in electronics when he met William Kurtz, who headed a company making energy-efficient aerogel-insulated windows and skylights. They met in a tech park in Santa Fe and started to discuss the need for windows that could automatically let heat in during winter months and keep it out in the summer months.

Some materials are reflective, like aluminum foil, and reflect light and heat. Other materials are generally transparent to light, like glass and plastic. A few rare materials can be both depending on their temperature. Vanadium dioxide is one such material.

In fact, vanadium dioxide is thermochromic; it changes its optical transmission with temperature. At cooler temperatures it is transparent to infrared light. When it heats up, it becomes metallic and reflects infrared, or IR, radiation without obstructing the view of visible light. This dynamic switch between IR transparent and IR reflective is what gave rise to the company name IR Dynamics.

Vanadium dioxide materials switch due to temperature instead of from applying electricity like electrochromic materials. Electrochromic glass is a growing sector of the window industry but is expensive and requires infrastructure such as wires and switches. Because they switch due to the temperature of the environment, thermochromic materials are interesting scientifically and commercially.

Supported by NMSBA grants and a Cooperative Research and Development Agreement, or CRADA, a team of researchers including Clem spent several years trying to develop easy-to-apply polymer films with thermochromic nanoparticles.

Nelson Bell, a Sandia materials chemist, was primarily responsible for designing and implementing a multistage process to make nanoparticles. He also determined the best way to disperse the nanoparticles in a spray-paint-like mixture, which led Bell to call himself a paint chemist.

The biggest challenge, said Kurtz and Clem, is figuring out how to make pounds of the nanoparticles needed to manufacture commercial products.

In addition, the team worked on how to tune the switching temperature. For example, it might be best for car windows to start reflecting heat at 78 degrees Fahrenheit but another temperature might be better for other applications. By tweaking the “recipe” and adding tiny amounts of different metals, the team was able to make nanoparticles that could switch at any temperature from 200 degrees F to minus 40 degrees F.

Characterizing these “batches” of nanoparticles to make sure they had the correct properties was the responsibility of Raegan Johnson, a Sandia materials scientist. She used high-end equipment, such as a Fourier transform infrared spectrometer, X-ray diffraction instrumentation and a transmission electron microscope to determine the infrared absorbance, chemical structure and physical structure of the nanoparticles.

“A startup the size of IR Dynamics can’t afford to purchase the diagnostic equipment that is available through Sandia Labs. Through the NMSBA and CRADA programs we are able to use those resources to develop the technology,” said Kurtz. “It is important for small technology companies like ours to be able to partner with the national laboratories. I think that it is part of what keeps us competitive as a nation with the rest of the world.”

The first product Kurtz hopes to get to market is a film to retrofit windows: something homeowners could apply to their existing windows to reduce their heating and cooling bills. Future applications include incorporating the nanoparticles into new windows, adding them to architectural plastics, such as the kind used in the Water Cube of the 2008 Beijing Olympics, or high-performance athletic clothing.

In 2016, IR Dynamics received a $1.95 million grant from the Department of Energy’s Advanced Research Project Agency-Energy SHIELD program to bridge “the valley of death” — a difficult period for startups before they produce a profitable product — and make retrofit window films a reality. The goal of this program is to make single-pane windows as energy efficient as double-pane windows. If every single-pane window in the U.S. was upgraded, it would save about 1.3 percent of all U.S. energy, or roughly the amount needed to power 32 million U.S. homes for a year.

Most of the other projects funded through the program focus on reducing heat loss, which is a key concern nationwide. However, in some areas of the U.S., cooling requires more electricity than heating, which makes windows that can reduce the costs from both real winners.

Kurtz hopes to have these retrofit window films on the market by late 2018. The company has filed several patents. IR Dynamics is also partnering with a leading corporation in the window-film and structural plastics industries and a leading company in the high-performance fabric industry.

“Usually the things we do are in technical journals or are presented at specialized conferences. It’s rewarding to see things go from idea to a commercial product,” said Clem. “For this company we can point to five new jobs that all started from the first NMSBA grant. Seeing new companies start up and grow knowing you’ve given them a technical boost is satisfying.”