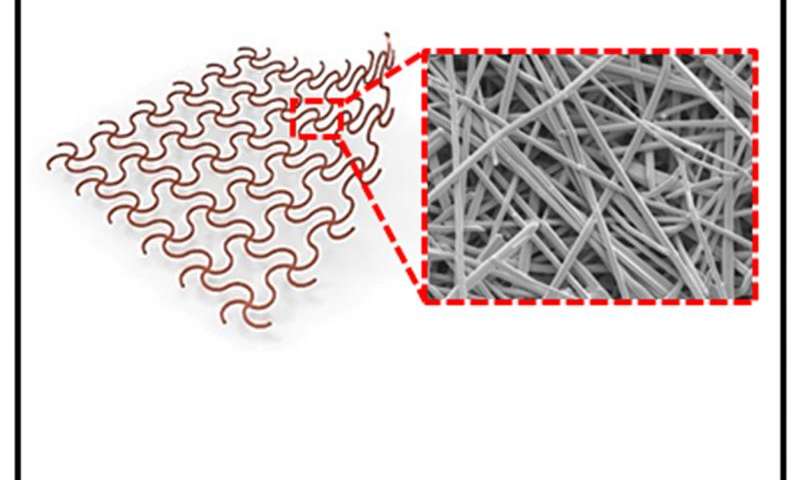 The conducting nanowires are around 50 nanometers in diameter and more than 150 microns long, and are embedded inside a thin layer of elastomer, or elastic polymer, about 1.5 microns thick. (Credit: Purdue University image/Min Ku Kim)

A skin-like biomedical technology that uses a mesh of conducting nanowires and a thin layer of elastic polymer might bring new electronic bandages that monitor biosignals for medical applications and provide therapeutic stimulation through the skin.

“It can intimately adhere to the skin and simultaneously provide medically useful biofeedback such as electrophysiological signals,” said Chi Hwan Lee, an assistant professor of biomedical engineering and mechanical engineering at Purdue University. “Uniquely, this work combines high-quality nanomaterials into a skin-like device, thereby enhancing the mechanical properties.”

The device could be likened to an electronic bandage and might be used to treat medical conditions using thermotherapeutics, where heat is applied to promote vascular flow for enhanced healing, said Lee, who worked with a team that includes Purdue graduate student Min Ku Kim.

Traditional approaches to developing such a technology have used thin films made of ductile metals such as gold, silver and copper.

“The problem is that these thin films are susceptible to fractures by over-stretching and cracking,” Lee said. “Instead of thin films we use nanowire mesh film, which makes the device more resistive to stretching and cracking than otherwise possible. In addition, the nanowire mesh film has very high surface area compared to conventional thin films, with more than 1,000 times greater surface roughness. So once you attach it to the skin the adhesion is much higher, reducing the potential of inadvertent delamination.”

Findings are detailed in a research publication appearing online in October in Advanced Materials.

The conducting nanowires are around 50 nanometers in diameter and more than 150 microns long and are embedded inside a thin layer of elastomer, or elastic polymer, about 1.5 microns thick. To demonstrate its utility in medical diagnostics, the device was used to record electrophysiological signals from the heart and muscles.

“Recording the electrophysiological signals from the skin can provide wearers and clinicians with quantitative measures of the heart’s activity or the muscle’s activity,” Lee said.

Much of the research was performed in the Birck Nanotechnology Center in Purdue’s Discovery Park.

“The nanowires mesh film was initially formed on a conventional silicon wafer with existing micro- and nano-fabrication technologies. Our unique technique, called a crack-driven transfer printing technique, allows us to controllably peel off the device layer from the silicon wafer, and then apply onto the skin,” Lee said.

The Oklahoma State researchers contributed theoretical simulations related to the underlying mechanics of the devices, and Seungyong Han synthesized and provided the conducting nanowires.

Future research will be dedicated to developing a transdermal drug-delivery bandage that would transport medications through the skin in an electronically controlled fashion. Such a system might include built-in sensors to detect the level of injury and autonomously deliver the appropriate dose of drugs.