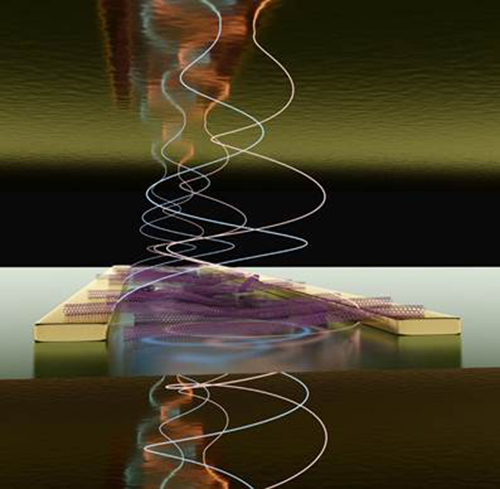 Schematic illustration of the new field-effect transistor device developed by researchers at Heidelberg and St Andrews. The transistor converts electrical current into light-matter quasi-particles and is based on single walled carbon nano-tubes that are embedded between two metallic mirrors forming an optical micro-cavity. (Credit: University of St Andrews)

The extraordinary stability of these transistors enabled electrical pumping at unprecedented rates, which paves the way for electrically pumped lasers with solution-processed and carbon-based semiconductors. As the emission of these light sources can be tuned across a wide range of the near-infrared spectrum, this work holds particular promise for applications in telecommunications.

Research on optoelectronic devices using carbon-based and organic materials has led to a variety of novel applications, such as organic light-emitting diodes for energy efficient, bright and high-resolution smartphones displays and TVs.

However, despite the rapid development in this area, electrically pumped lasing from organic materials remains elusive. One major challenge is to generate the high pumping rates required for lasing. Recently, so called polariton lasers have received a lot of attention as they provide a new and potentially more efficient way to generate laser-like light.

Instead of relying purely on photons as in a conventional laser, the polariton laser uses photons that are strongly coupled to the excited states of the material. This coupled nature of the polaritons can facilitate the generation of laser-like light if high enough current densities could be achieved.

Previously the same team showed that it is possible to form polaritons in semiconducting carbon nanotubes at room temperature by external optical excitation. In their latest work, the researchers now found a way to generate polaritons electrically.

To achieve this, they developed a carbon nanotube-based light-emitting field-effect transistor that was embedded between two metal mirrors in close proximity acting as an optical micro-cavity. In such a device the current flow is perpendicular to the optical feedback, which allows both to be optimized independently.

Because of the extreme stability and high conductivity provided by the carbon nanotubes in this device, current densities orders of magnitude above any previously reported values were achieved. Calculations by PhD student Arko Graf, one of the first authors of the study, show that with further improvements to the device architecture, electrically pumped polariton lasing will be within realistic reach.

Professor Zaumseil explains: “Besides the potential generation of laser light, these devices can also be used to reversibly tune between strong and weak light-matter coupling, which opens a route to more fundamental investigations.”

Professor Gather added: “Our curiosity to understand what happens when we combine tailored nanomaterials with high-quality photonic structures is really what drives this collaboration.”

The paper “Electrical pumping and tuning of exciton-polaritons in carbon nanotube microcavities” by A. Graf, M. Held, Y. Zakharko, L. Tropf, M.C. Gather and J. Zaumseil is published online in the 17 July 2017 issue of Nature Materials.