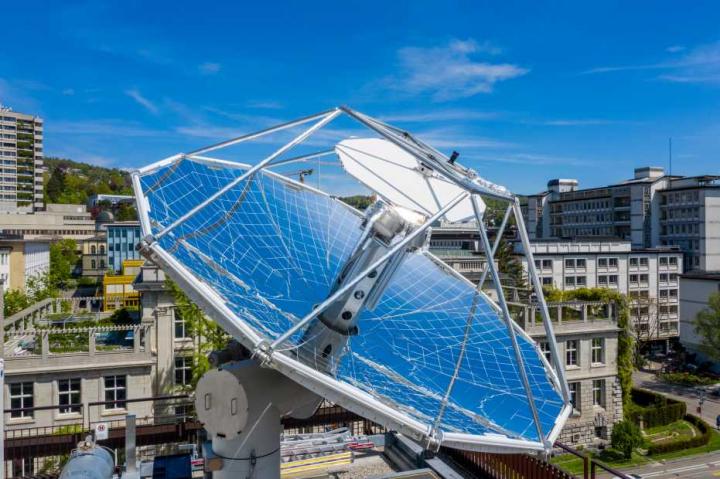 The research plant is located on the roof of the ETH building on Sonneggstrasse.

Carbon-neutral fuels are crucial for making aviation and maritime transport sustainable. ETH researchers have developed a solar plant to produce synthetic liquid fuels that release as much CO2 during their combustion as previously extracted from the air for their production. CO2 and water are extracted directly from ambient air and split using solar energy. This process yields syngas, a mixture of hydrogen and carbon monoxide, which is subsequently processed into kerosene, methanol or other hydrocarbons. These drop-in fuels are ready for use in the existing global transport infrastructure.

Aldo Steinfeld, Professor of Renewable Energy Carriers at ETH Zurich, and his research group developed the technology. "This plant proves that carbon-neutral hydrocarbon fuels can be made from sunlight and air under real field conditions," he explained. "The thermochemical process utilises the entire solar spectrum and proceeds at high temperatures, enabling fast reactions and high efficiency." The research plant at the heart of Zurich advances ETH's research towards sustainable fuels.

The solar mini-refinery on the roof of ETH Zurich proves that the technology is feasible, even under the climate conditions prevalent in Zurich. It produces around one decilitre of fuel per day. Steinfeld and his group are already working on a large-scale test of their solar reactor in a solar tower near Madrid, which is carried out within the scope of the EU project sun-to-liquid. The solar tower plant is presented to the public in Madrid at the same time today as the mini-refinery in Zurich.

The next project goal is to scale the technology for industrial implementation and make it economically competitive. "A solar plant spanning an area of one square kilometre could produce 20,000 litres of kerosene a day," said Philipp Furler, Director (CTO) of Synhelion and a former doctoral student in Steinfeld's group. "Theoretically, a plant the size of Switzerland - or a third of the Californian Mojave Desert - could cover the kerosene needs of the entire aviation industry. Our goal for the future is to efficiently produce sustainable fuels with our technology and thereby mitigate global CO2 emissions."

The process chain of the new system combines three thermochemical conversion processes: Firstly, the extraction of CO2 and water from the air. Secondly, the solar-thermochemical splitting of CO2 and water. Thirdly, their subsequent liquefaction into hydrocarbons. CO2 and water are extracted directly from ambient air via an adsorption/desorption process. Both are then fed into the solar reactor at the focus of a parabolic reflector. Solar radiation is concentrated by a factor of 3,000, generating process heat at a temperature of 1,500 degrees Celsius inside the solar reactor. At the heart of the solar reactor is a ceramic structure made of cerium oxide, which enables a two-step reaction - the redox cycle - to split water and CO2 into syngas. This mixture of hydrogen and carbon monoxide can then be processed into liquid hydrocarbon fuels through conventional methanol or Fischer-Tropsch synthesis.