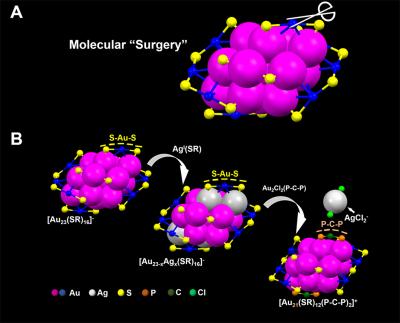 A team of chemists led by Carnegie Mellon University’s Rongchao Jin has for the first time conducted site-specific surgery on a nanoparticle. The procedure, which allows for the precise tailoring of nanoparticles, stands to advance the field of nanochemistry.

The surgical technique developed by Qi Li, the study’s lead author and a 3rd year graduate student in the Jin group, will allow researchers to enhance nanoparticles’ functional properties, such as catalytic activity and photoluminescence, increasing their usefulness in a wide variety of fields including health care, electronics and manufacturing. The findings were published in Science Advances.

“Nanochemistry is a relatively new field, it’s only about 20 years old. We’ve been racing to catch up to fields like organic chemistry that are more than 100 years old,” said Jin, a chemistry professor in the Mellon College of Science. “Organic chemists have been able to tailor the functional groups of molecules for quite some time, like tailoring penicillin for better medical functions, for example. We dreamed that we could do something similar in nanoscience. Developing atomically precise nanoparticles has allowed us to make this dream come true.”

In order to make this “nano-surgery” a reality, researchers needed to begin with atomically precise nanoparticles that could be reliably produced time after time. Jin’s lab has been at the forefront of this research. Working with gold nanoparticles, he and his team have developed methods to precisely control the number of atoms in each nanoparticle, resulting in uniformly-sized nanoparticles with every batch. With reliably precise particles, Jin and colleagues were able to identify the particles’ structures, and begin to tease out how that structure impacted the particles’ properties and functionality.

With these well-defined nanoparticles in hand, Jin’s next step was to find a way to surgically tailor the particles in order to learn more about – and hopefully enhance – their functionality.

In their recent study, Jin and colleagues performed nano-surgery on a gold nanoparticle made up of 23 gold atoms surrounded by a protective surface of ligands in staple-like motifs. Using a two-step metal exchange method, they removed two S-Au-S staples from the particle’s surface. In doing this they revealed the structural factors that determine the particle’s optical properties and established the role that the surface plays in photoluminescence. Significantly, the surgery increased the particle’s photoluminescence by about 10-fold. Photoluminescence plays a critical role in biological imaging, cancer diagnosis and LED technology, among other applications.

Jin and coworkers are now trying to generalize this site-specific surgery method to other nanoparticles.