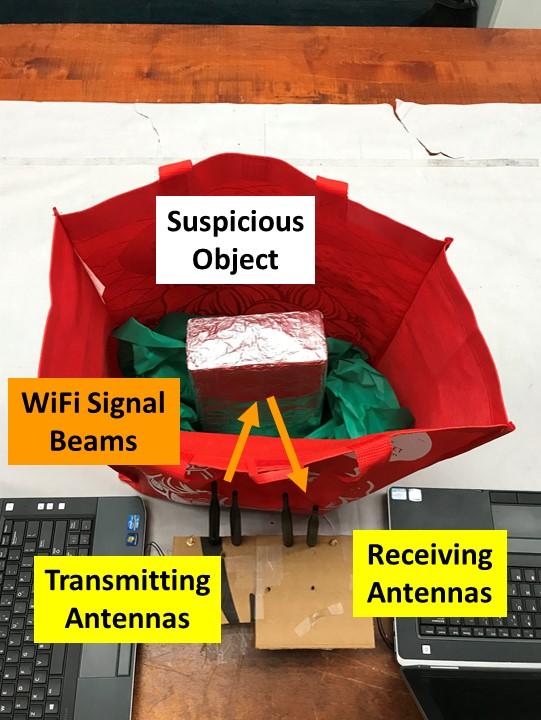 Ordinary WiFi can easily detect weapons, bombs and explosive chemicals in bags at museums, stadiums, theme parks, schools and other public venues, according to a Rutgers University-New Brunswick-led study.

"This could have a great impact in protecting the public from dangerous objects," said Yingying (Jennifer) Chen, study co-author and a professor in the Department of Electrical and Computer Engineering in Rutgers-New Brunswick's School of Engineering. "There's a growing need for that now."

The peer-reviewed study received a best paper award at the 2018 IEEE Conference on Communications and Network Security on cybersecurity. The study - led by researchers at the Wireless Information Network Laboratory (WINLAB) in the School of Engineering - included engineers at Indiana University-Purdue University Indianapolis (IUPUI) and Binghamton University.

WiFi, or wireless, signals in most public places can penetrate bags to get the dimensions of dangerous metal objects and identify them, including weapons, aluminum cans, laptops and batteries for bombs. WiFi can also be used to estimate the volume of liquids such as water, acid, alcohol and other chemicals for explosives, according to the researchers.

This low-cost system requires a WiFi device with two to three antennas and can be integrated into existing WiFi networks. The system analyzes what happens when wireless signals penetrate and bounce off objects and materials.

Experiments with 15 types of objects and six types of bags demonstrated detection accuracy rates of 99 percent for dangerous objects, 98 percent for metal and 95 percent for liquid. For typical backpacks, the accuracy rate exceeds 95 percent and drops to about 90 percent when objects inside bags are wrapped, Chen said.

"In large public areas, it's hard to set up expensive screening infrastructure like what's in airports," Chen said. "Manpower is always needed to check bags and we wanted to develop a complementary method to try to reduce manpower."

Next steps include trying to boost accuracy in identifying objects by imaging their shapes and estimating liquid volumes, she said.