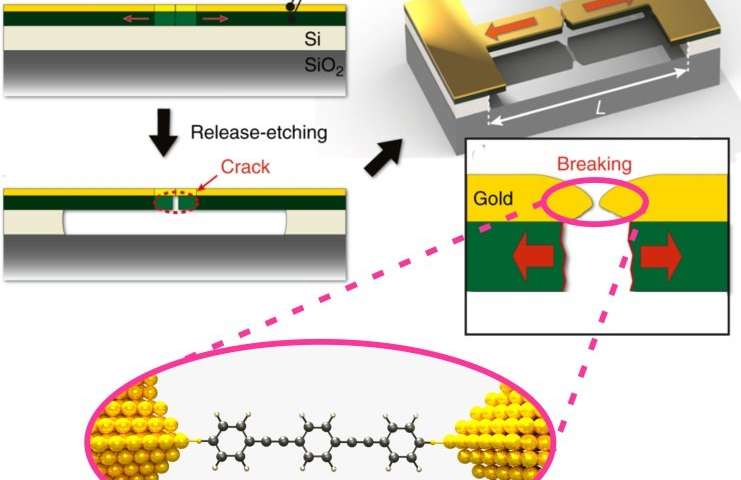 Nanogap electrodes, basically pairs of electrodes with a nanometer-sized gap between them, are attracting attention as scaffolds to study, sense, or harness molecules, the smallest stable structures found in nature. So far, this has been realised using the common methods of mechanically controlled break junctions, scanning tunneling microscopy-based break junctions,or electromigrated break junctions. These techniques, however, are not useful for applications due to their lack of scalability. A team from TU Delft in collaboration with researchers from the KTH Royal Institute of Technology in Sweden has now developed a novel way of fabricating molecular junctions.

The researchers started by depositing a thin film of brittle titanium nitride (TiN) on a silicon wafer (see figure). Thereafter, small gold wires could be deposited on top of the brittle TiN. The researchers observed that the TiN film is under high residual tensile strain due to the fabrication process. Consequently, when detaching the titanium nitride layer from its underlying substrate via a process called release etching, tiny cracks form to release the strain – similar to cracks that sometimes form in the glazing of pottery.

This cracking process is the key to the new junction fabrication method. Gold wires running across the cracks are stretched and eventually break. The gaps in the gold wires that thus appear are as small as a single molecule. In addition, the dimensions of these junctions can be controlled by controlling the strain in TiN using conventional microfabrication technology. Furthermore, the researchers managed to link single molecules to the gapped gold wires to measure their electrical conductance.

This novel technology could be used to produce molecular junctions in a scalable fashion – allowing millions of them to be manufactured in parallel. The methodology can also be extended to other classes of materials by substituting gold with any electrode material that exhibits interesting electrical, chemical, and plasmonic properties for applications in molecular electronics and spintronics, nanoplasmonics, and biosensing.