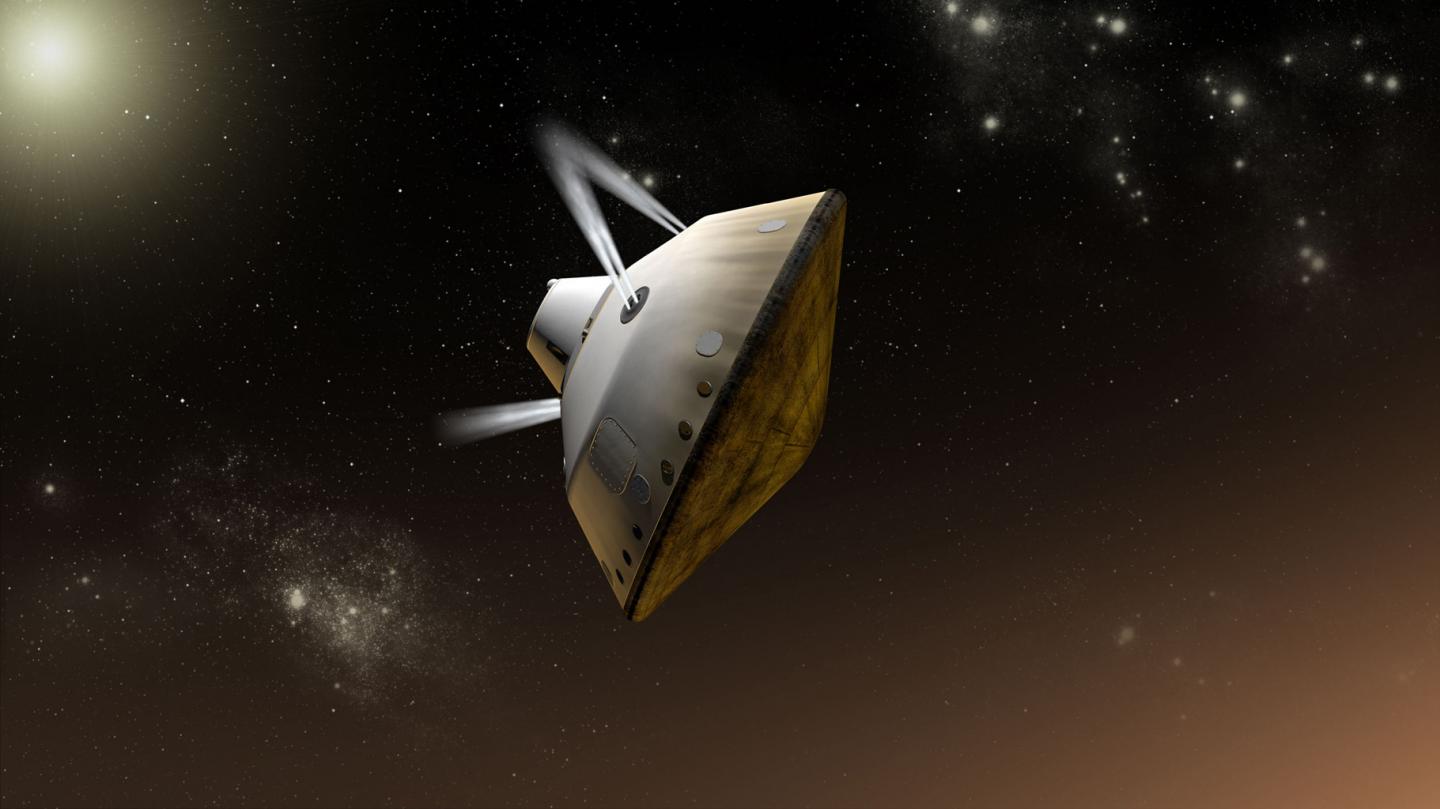 The heaviest vehicle to successfully land on Mars is the Curiosity Rover at 1 metric ton, about 2,200 pounds. Sending more ambitious robotic missions to the surface of Mars, and eventually humans, will require landed payload masses in the 5- to 20-ton range. To do that, we need to figure out how to land more mass. That was the goal of a recent study.

Normally, when a vehicle enters the Mars atmosphere at hypersonic speeds of about Mach 30, it slows down quickly, deploys a parachute to slow down more then uses rocket engines or air bags to finish the landing.

“Unfortunately, parachute systems do not scale well with increasing vehicle mass. The new idea is to eliminate the parachute and use larger rocket engines for descent,” said Zach Putnam, assistant professor in the Department of Aerospace Engineering at the University of Illinois at Urbana-Champaign.

According to Putnam, when the lander has slowed to about Mach 3, the retropropulsion engines are ignited, fired in the opposite direction to slow the vehicle down for a safe landing. The trouble is, that burns a lot of propellant. Propellant adds to vehicle mass, which can quickly drive up vehicle cost and exceed the current launch capability here on Earth. And every kilogram of propellant is a kilogram that can’t be payload: humans, science instruments, cargo, etc.

“When a vehicle is flying hypersonically, before the rocket engines are fired, some lift is generated and we can use that lift for steering,” Putnam said. “If we move the center of gravity so that it’s not uniformly packaged, but heavier on one side, it will fly at a different angle.”

Putnam explained that the flow around the vehicle is different on the top and the bottom which creates an imbalance, a pressure differential. Because the lift is in one direction, it can be used to steer the vehicle as it decelerates through the atmosphere.

“We have a certain amount of control authority during entry, descent, and landing–that is, the ability to steer.” Putnam said. “Hypersonically, the vehicle can use lift to steer. Once the descent engines are ignited, the engines have a certain amount of propellant. You can fire engines in such a way that you land very accurately, you can forget about accuracy and use it all to land the largest spacecraft possible, or you can find a balance in between.

“The question is, if we know we’re going to light the descent engines at, say, Mach 3, how should we steer the vehicle aerodynamically in the hypersonic regime so that we use the minimum amount of propellant and maximize the mass of the payload that we can land?

“To maximize the amount of mass we can landing on the surface, the altitude at which you ignite your descent engines is important, but also the angle your velocity vector makes with the horizon–how steep you’re coming in,” Putnam said.

The study clarified how to make the best use of the lift vector, using optimal control techniques to identify control strategies that can be used hypersonically across different interplanetary delivery conditions, vehicle properties, and landed altitudes to maximize landed mass.

“Turns out, it is propellant-optimal to enter the atmosphere with the lift vector pointed down so the vehicle is diving. Then at just the right moment based on time or velocity, switch to lift up, so the vehicle pulls out and flies along at low altitude,” Putnam said. “This enables the vehicle to spend more time flying low where the atmospheric density is higher. This increases the drag, reducing the amount of energy that must be removed by the descent engines.”