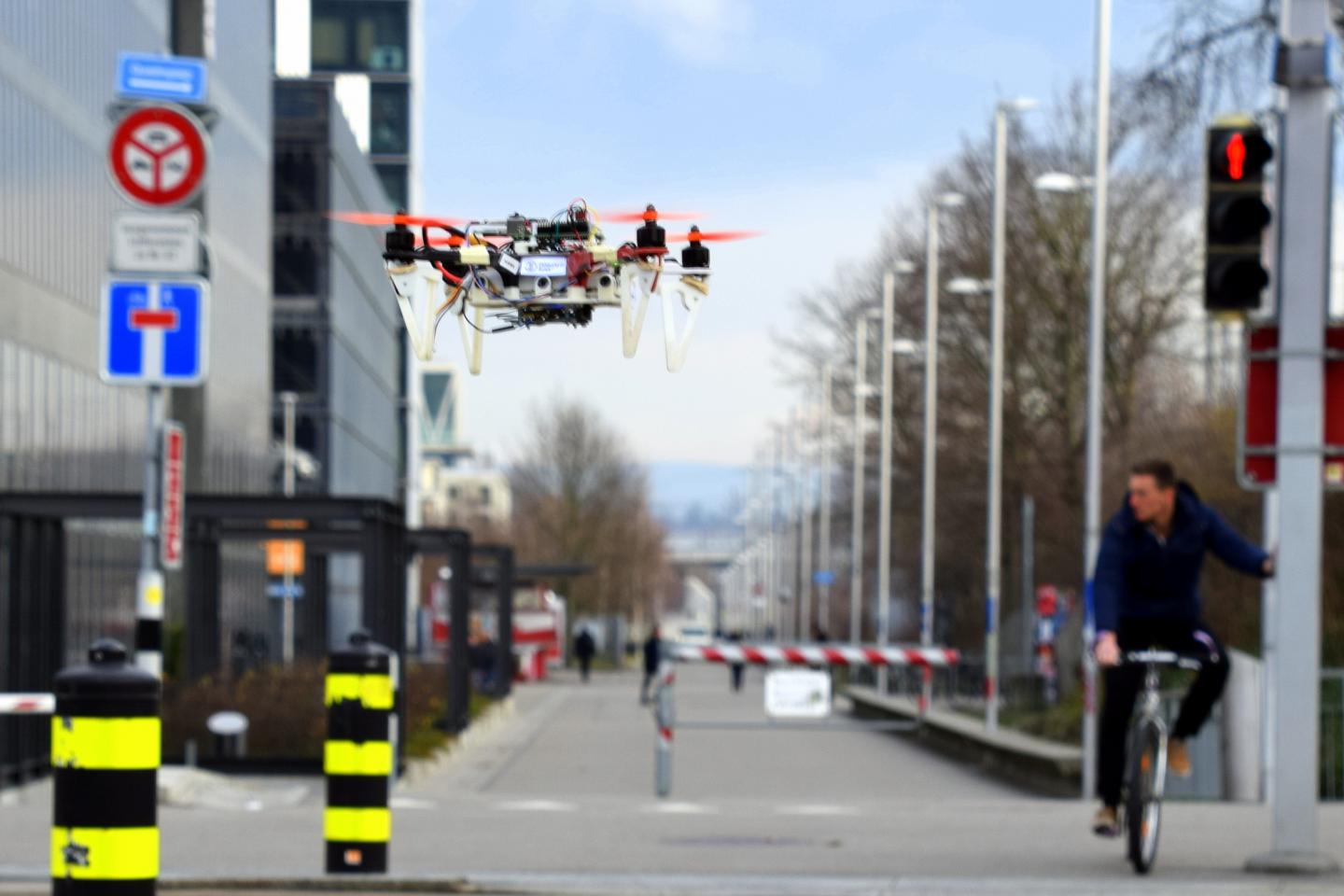 By imitating cars and bycicles, the drone automatically learned to respect the safety rules.

All today’s commercial drones use GPS, which works fine above building roofs and in high alti-tudes. But what, when the drones have to navigate autonomously at low altitude among tall buildings or in the dense, unstructured city streets with cars, cyclists or pedestrians suddenly crossing their way? Until now, commercial drones are not able to quickly react to such unforeseen events.

Researchers of the University of Zurich and the National Centre of Competence in Research NCCR Robotics developed DroNet, an algorithm that can safely drive a drone through the streets of a city. Designed as a fast 8-layers residual network, it produces two outputs for each single input image: a steering angle to keep the drone navigating while avoiding obstacles, and a collision probability to let the drone recognise dangerous situations and promptly react to them. “DroNet recognises static and dynamic obstacles and can slow down to avoid crashing into them. With this algorithm we have taken a step forward towards integrating autonomously navigating drones into our everyday life”, says Davide Scaramuzza, Professor for Robotics and Perception at the University of Zurich.

Instead of relying on sophisticated sensors, the drone developed by Swiss researchers uses a normal camera like that of every smartphone, and a very powerful artificial intelligence algorithm to interpret the scene it observes and react accordingly. The algorithm consists of a so-called Deep Neural Network. “This is a computer algorithm that learns to solve complex tasks from a set of ‘training examples’ that show the drone how to do certain things and cope with some difficult situations, much like children learn from their parents or teachers”, says Prof. Scaramuzza.

Cars and bicycles are the drones’ teachers

One of the most difficult challenges in Deep Learning is to collect several thousand ‘training examples’. To gain enough data to train their algorithms, Prof. Scaramuzza and his team collected data from cars and bicycles, that were driving in urban environments. By imitating them, the drone automatically learned to respect the safety rules, such as “How follow the street without crossing into the oncoming lane”, and “How to stop when obstacles like pedestrians, construction works, or other vehicles, block their ways”. Even more interestingly, the research-ers showed that their drones learned to not only navigate through city streets, but also in completely different environments, where they were never taught to do so. Indeed, the drones learned to fly autonomously in indoor environments, such as parking lots and office’s corridors.

This research opens potential for monitoring and surveillance or parcel delivery in cluttered city streets as well as rescue operations in disastered urban areas. Nevertheless, the research team warns from exaggerated expectations of what lightweight, cheap drones can do. “Many technological issues must still be overcome before the most ambitious applications can be-come reality,” says PhD Student Antonio Loquercio.