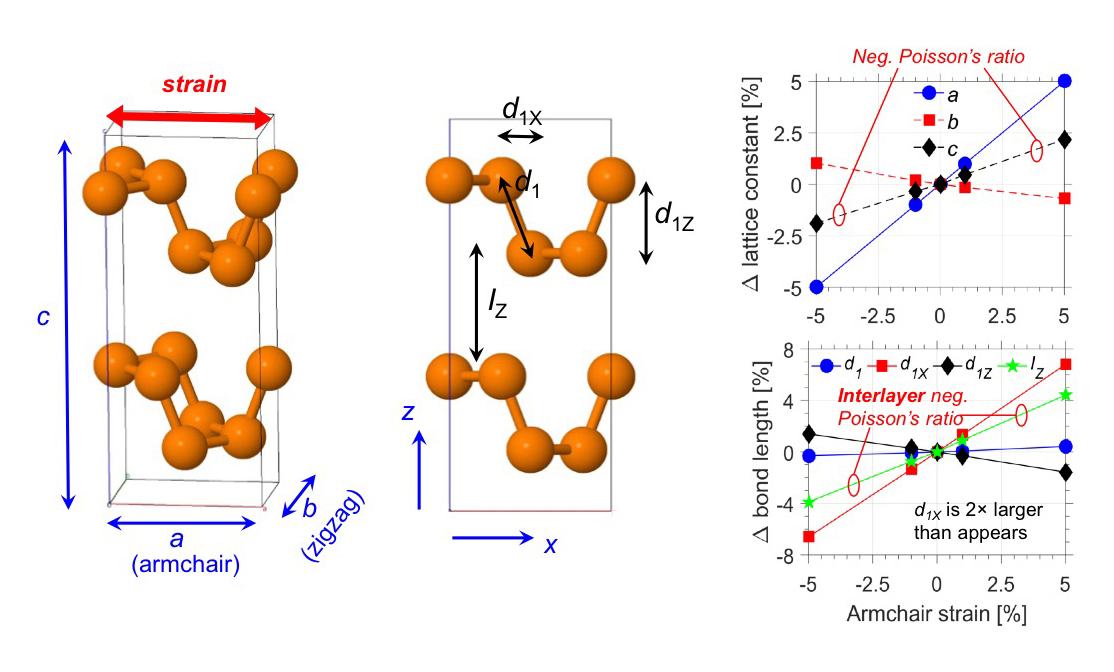 These ball-and-stick models, at left, depict the uniquely puckered atomic structure of a material called black phosphorus. The graphs at right show details that describe the existence of a naturally occurring exotic property in which a material becomes thicker when stretched – the opposite of most materials – a discovery that could lead to new studies into the fundamental science of nano-materials behavior. (Credit: Purdue University image/Peide Ye)

Researchers have confirmed the existence of a naturally occurring exotic property in which a material becomes thicker when stretched – the opposite of most materials – a discovery that could lead to new studies into the fundamental science of nano-materials behavior.

However, until now the behavior has not been confirmed in natural materials, said Peide Ye, Purdue University‘s Richard J. and Mary Jo Schwartz Professor of Electrical and Computer Engineering.

The auxetic behavior was discovered in a material called black phosphorous.

Findings are detailed in a research paper that appeared on Sept. 23 in the journal Nano Letters.

“Until now, there has been a lack of experimental evidence since the measurement of internal deformation in auxetic materials, in particular at the atomic level, is extremely difficult,” Ye said.

Researchers used a technique called Raman spectroscopy to document the negative Poisson’s ratio in extremely thin, individual layers of black phosphorous called phosphorene. The research was based at the Birck Nanotechnology Center in Purdue’s Discovery Park.

The Nano Letters paper was authored by doctoral student Yuchen Du; former postdoctoral research associate Jesse Maassen; graduate students Wangran Wu and Zhe Luo; Xianfan Xu, the James J. and Carol L. Shuttleworth Professor of Mechanical Engineering and professor of electrical and computer engineering; and Ye. Du carried out most of the experiments. Maassen performed the theoretical work critical to the research. He is now an assistant professor of physics at Dalhousie University in Nova Scotia, Canada.

The researchers focused on the material’s uniquely puckered crystal structure in which atoms are arranged in a wavy pattern. Like silicon, the material possesses a bandgap, a trait essential for a semiconductor’s ability to switch on and off in electronic circuits. The material also has a relatively high “carrier mobility,” meaning it is very conductive and could be useful for technological applications.

Future research will include work to investigate whether the negative Poisson’s ratio exists in other so-called “two-dimensional” materials, including extremely thin layers of graphite called graphene.