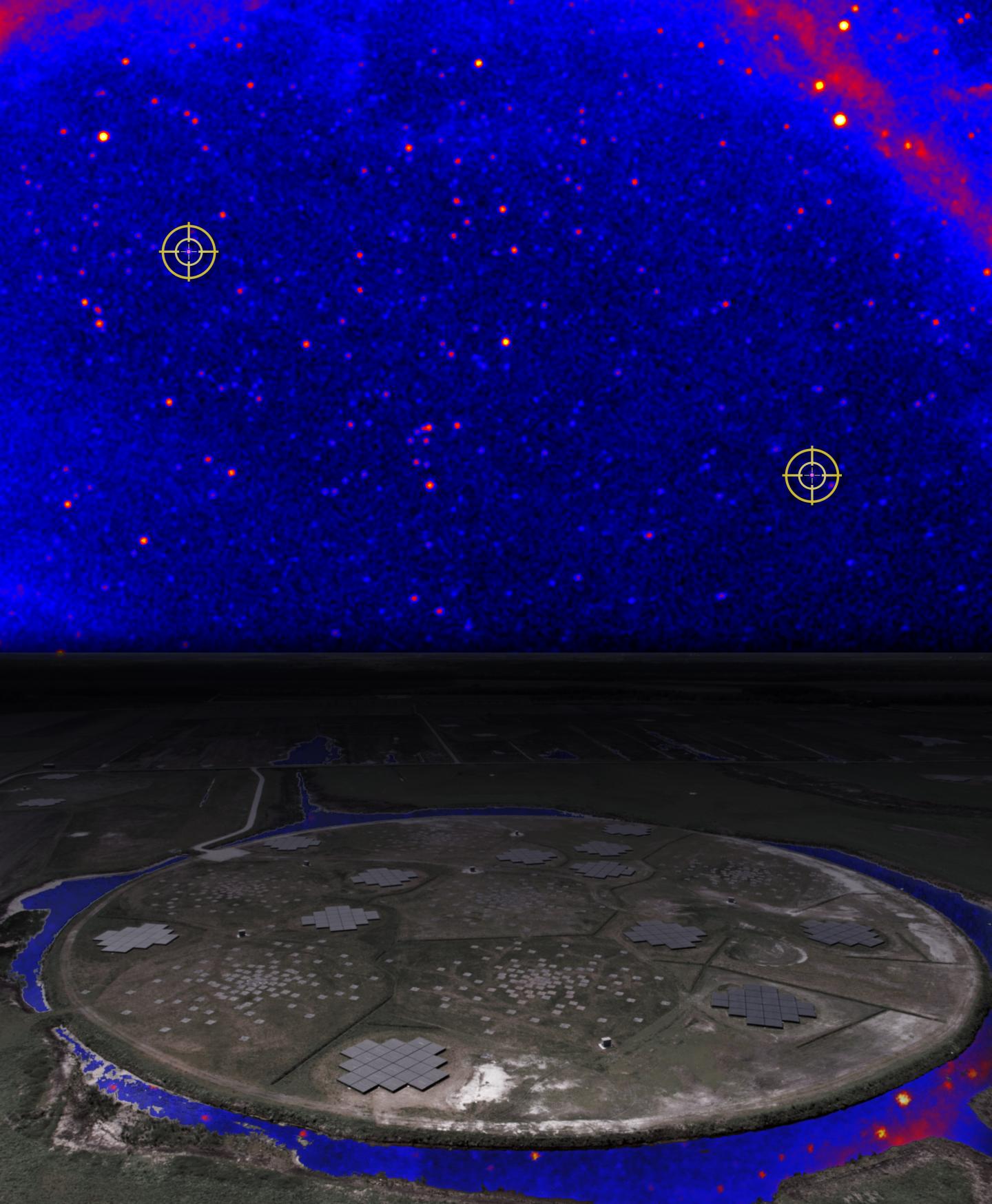 CAPTION The Low-Frequency Array (LOFAR), a network of thousands of linked radio antennas, primarily located in the Netherlands, has discovered two new millisecond pulsars by investigating previously unknown gamma-ray sources uncovered by NASA’s Fermi Gamma-ray Space Telescope. Pulsar J0952-0607, highlighted near center right, rotates 707 times a second and now ranks as second-fastest pulsar known. The location of LOFAR’s first millisecond pulsar discovery, J1552+5437, which spins 412 times a second, is shown at upper left. Radio emission from both pulsars dims quickly at higher radio frequencies, making them ideally suited for LOFAR. The top of this composite image shows a portion of the gamma-ray sky as seen by Fermi. At the bottom is the LOFAR “superterp” near Exloo, the Netherlands, which houses the facility’s core antenna stations.

By following up on mysterious high-energy sources mapped out by NASA’s Fermi Gamma-ray Space Telescope, the Netherlands-based Low Frequency Array (LOFAR) radio telescope has identified a pulsar spinning at more than 42,000 revolutions per minute, making it the second-fastest known.

A pulsar is the core of a massive star that exploded as a supernova. In this stellar remnant, also called a neutron star, the equivalent mass of half a million Earths is crushed into a magnetized, spinning ball no larger than Washington, D.C. The rotating magnetic field powers beams of radio waves, visible light, X-rays and gamma rays. If a beam happens to sweep across Earth, astronomers observe regular pulses of emission and classify the object as a pulsar.

“Roughly a third of the gamma-ray sources found by Fermi have not been detected at other wavelengths,” said Elizabeth Ferrara, a member of the discovery team at NASA’s Goddard Space Center in Greenbelt, Maryland. “Many of these unassociated sources may be pulsars, but we often need follow-up from radio observatories to detect the pulses and prove it. There’s a real synergy across the extreme ends of the electromagnetic spectrum in hunting for them.”

The new object, named PSR J0952-0607 — or J0952 for short — is classified as a millisecond pulsar and is located between 3,200 and 5,700 light-years away in the constellation Sextans. The pulsar contains about 1.4 times the sun’s mass and is orbited every 6.4 hours by a companion star that has been whittled away to less than 20 times the mass of the planet Jupiter. The scientists report their findings in a paper published in the Sept. 10 issue of The Astrophysical Journal Letters and now available online.

At some point in this system’s history, matter began streaming from the companion and onto the pulsar, gradually raising its spin to 707 rotations a second, or more than 42,000 rpm, and greatly increasing its emissions. Eventually, the pulsar began evaporating its companion, and this process continues today. Because of their similarity to spiders that consume their mates, systems like J0952 are called black widow or redback pulsars, depending on how much of the companion star remains. Most of the known systems of these types were found by following up Fermi unassociated sources.

The LOFAR discovery also hints at the potential to find a new population of ultra-fast pulsars.

“LOFAR picked up pulses from J0952 at radio frequencies around 135 MHz, which is about 45 percent lower than the lowest frequencies of conventional radio searches,” said lead author Cees Bassa at the Netherlands Institute for Radio Astronomy (ASTRON). “We found that J0952 has a steep radio spectrum, which means its radio pulses fade out very quickly at higher frequencies. It would have been a challenge to find it without LOFAR.”

Theorists say pulsars could rotate as fast as 72,000 rpm before breaking apart, yet the fastest spin known — by PSR J1748-2446ad, reaching nearly 43,000 rpm — is just 60 percent of the theoretical maximum. Perhaps pulsars with faster periods simply can’t form. But the gap between theory and observation may also result from the difficulty in detecting the fastest rotators.

“There is growing evidence that the fastest-spinning pulsars tend to have the steepest spectra,” said co-author Ziggy Pleunis, a doctoral student at McGill University in Montreal. The first millisecond pulsar discovered with LOFAR, which was found by Pleunis, is J1552+5437, which spins at 25,000 rpm and also exhibits a steep spectrum. “Since LOFAR searches are more sensitive to these steep-spectrum radio pulsars, we may find that even faster pulsars do, in fact, exist and have been missed by surveys at higher frequencies,” he explained.

During its nine years in orbit, Fermi has played a role in the discovery of more than 100 pulsars, either through direct detection of gamma-ray pulses or radio follow-up of unassociated sources.

LOFAR is a radio telescope composed of an international network of antenna stations designed to observe the universe at frequencies between 10 and 250 MHz. Operated by ASTRON, the network includes stations in the Netherlands, Germany, Sweden, the U.K., France, Poland and Ireland.