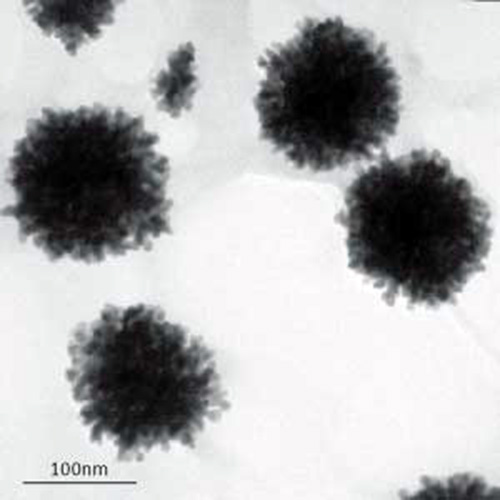 Gold nanoflowers grown in starfruit juice are promising agents for photothermal cancer therapy. When injected into a tumor and irradiated with near-infrared laser light, the nanoflowers heat up and kill the cancer cells around them.

Although photothermal therapy is an established idea, the agents developed so far have had drawbacks, explains Enyi Ye from the A*STAR Institute of Materials Research and Engineering, who co-led the current work (Nanoscale, “Unexpected formation of gold nanoflowers by a green synthesis method as agents for a safe and effective photothermal therapy”). The challenge is to achieve high efficacy, stability and biocompatibility in the same nanocrystal, which all relate to the way the nanocrystals are grown.

A nanomaterial’s shape dictates its light capturing ability. During the synthesis of nanocrystals, when gold ions are mixed with a reducing agent to precipitate crystal formation, chemicals called capping agents can be added to direct the crystals’ growth.

Ye and his colleagues tried an alternative ‘green’ approach, using a natural material they hoped would contain the biological equivalent of capping agents. This would negate the need to remove the compounds before nanocrystal injection into the patient.

“I selected starfruit juice because it is available all the time in tropical areas, and because starfruit is rich in vitamin C, which serves as the reducing agent, and polyphenolic antioxidants,” says Ye. As the team had predicted, the vitamin C initiated and directed nanocrystal growth, and the polyphenolic compounds acted as capping agents, coating the flower-shaped nanocrystals with a stabilizing, biocompatible surface.

The gold nanoflowers showed strong near-infrared light absorption, and were non-toxic to cells. When 808 nanometer near-infrared laser light was shone on cells mixed with nanoflowers, 30 seconds of illumination killed every cell within the laser spot. In tests with mice, photothermally-treated animals’ tumors gradually disappeared — whereas in animals given either laser irradiation only, or nanoflower injection alone, the tumor continued its rapid growth.

The team now plans to take the research in two directions, says Ye. “We will continue to develop green methods to prepare multifunctional nanocrystals. We would also like to further exploit the practical applications of the gold nanoflowers in areas such as wound healing and bacterial infection control,” he says.