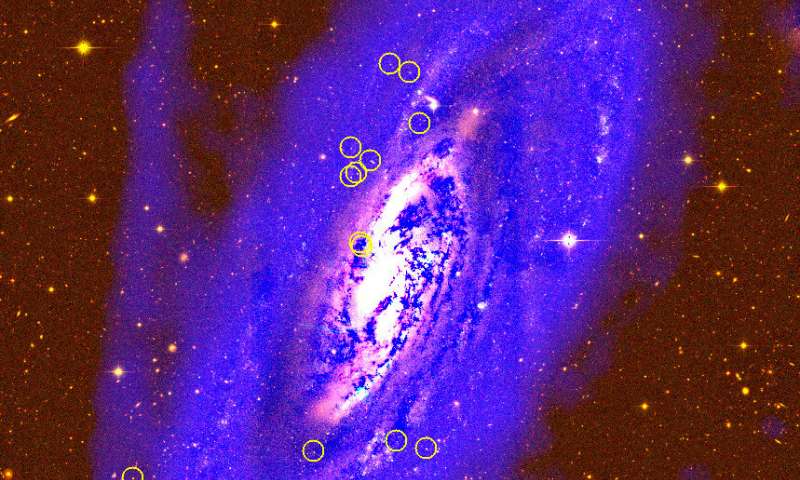 False color image of M106. The image combines neutral hydrogen data (blue) from the WSRT with optical data (red and green) from the CFHT. Yellow circles highlight the observed globular clusters, which are distributed in a rotating disk whose velocity is the same as that of the neutral gas. Illustration and design: Divakara Mayya, INAOE. Credit: Instituto de Radioastronomía y Astrofísica

An international scientific team led by a Mexican researcher discovered globular clusters rotating at the same speed as the gas in the disk of the spiral galaxy Messier 106 (also known as M106 or NGC 4258) to which they belong. Because of their disk-like arrangement and speed, these distant objects could be relics of cosmic high noon.

This research was carried out using the Gran Telescopio Canarias (GTC), of which Mexico is a partner, and the results were published in the May 1 issue of The Astrophysical Journal (ApJ).

Dr. Rosa Amelia González-Lópezlira, researcher at the Institute of Radio Astronomy and Astrophysics of the National Autonomous University of Mexico, Campus Morelia (IRyA-UNAM), is leading this project. The second author of the article is Dr. Divakara Mayya, a researcher at the National Institute of Astrophysics, Optics and Electronics (INAOE). The working group includes researchers and students in Australia, Brazil, Chile, Denmark, France, and Germany, in addition to other colleagues at the IRyA-UNAM and INAOE.

Dr. González-Lópezlira explains that globular clusters are groups of between 100,000 and 1 million stars. They are common objects, especially in large galaxies. “The Milky Way has 160 of these clusters, but very large galaxies can have tens of thousands. Usually, these clusters are distributed as in a sphere. All the stars of a globular cluster are approximately of the same age and have more or less the same chemical composition. We do not know exactly how these clusters were formed, and there are several hypotheses that try to explain it: one says that they precede the formation of galaxies, another one that clusters formed along with them, yet another postulates that some appear when gas collides during a galaxy merger,” she says.

In the Milky Way, for example, most of the globular clusters seem to have formed together with the galaxy; a few were formed or acquired later, when one or several smaller galaxies merged with it.

The article that was published in the May 1st issue of the ApJ is part of a larger project to study the globular cluster systems of nine spiral galaxies within a radius of 52 million light-years. “We are particularly interested in the relationship between the number of globular clusters and the mass of the central black hole in spiral galaxies,” says the researcher. The relationship is very tight for elliptical galaxies, but it is not as clear in spiral galaxies. The Milky Way, for example, does not fulfill it. Dr. González-Lópezlira adds: “The nine spiral galaxies that we are going to study have good estimates of the masses of their black holes and are at distances where the globular clusters can be seen well with the Canada-France-Hawaii Telescope (CFHT), with which we made the initial observations.”

Dr. Divakara Mayya explains that these kinds of studies begin by taking images and finding globular cluster candidates based on so-called color-color diagrams. In this case, in addition to an optical filter, an ultraviolet and an infrared filter were used, which is not common. “Candidates are selected in these diagrams, but other apparently point sources, like stars and faraway galaxies, can seep in. Therefore, spectra confirm that each object has an old coeval population, and that its recession velocity is compatible with the recession velocity of the galaxy to which it is supposed to belong. We use OSIRIS in the GTC because these objects are quite far away, and therefore exposures of more than one hour with the largest optical telescope in the world are needed to extract the information from the spectra. OSIRIS is a multiobject spectrograph with which one can observe several objects at once. We observed a total of 23 globular cluster candidates in two fields.”

The main finding of the project was totally unexpected and surprising. Instead of being distributed in a sphere, “the globular clusters of NGC 4258 seem to be arranged in a disk that rotates in phase and practically as fast as the neutral hydrogen (HI) gaseous disk of the galaxy, which was observed with the Westerbork Synthesis Radio Telescope (WSRT), even at great distances from its center. This has never been seen before. Those are apparently the facts, although one must continue working to confirm them. This is one of the very nice things that can happen when working in science,” says Dr. Mayya.

Dr. González-Lópezlira says that because of the way in which the M106 clusters move, the disk where they are distributed is very similar to the disks where we see that stars were forming 10 billion years ago. “We speculate that the disk of clusters of M106 is a relic or remnant of cosmic high noon.”

The researchers further corroborated with the GTC that M106 does fall in the correlation between number of globular clusters and black hole mass, and that their photometric method to find globular clusters is excellent. The supermassive black hole at the center of M106 weighs 40 million solar masses, 10 times more than that of the Milky Way’s and 150 times less than Messier 87’s, whose image was recently released.

Finally, the IRyA-UNAM researcher added that studies like this in more spiral galaxies will clarify the role of the several proposed hypotheses in the assembly of galaxies, their globular cluster systems and their black holes.