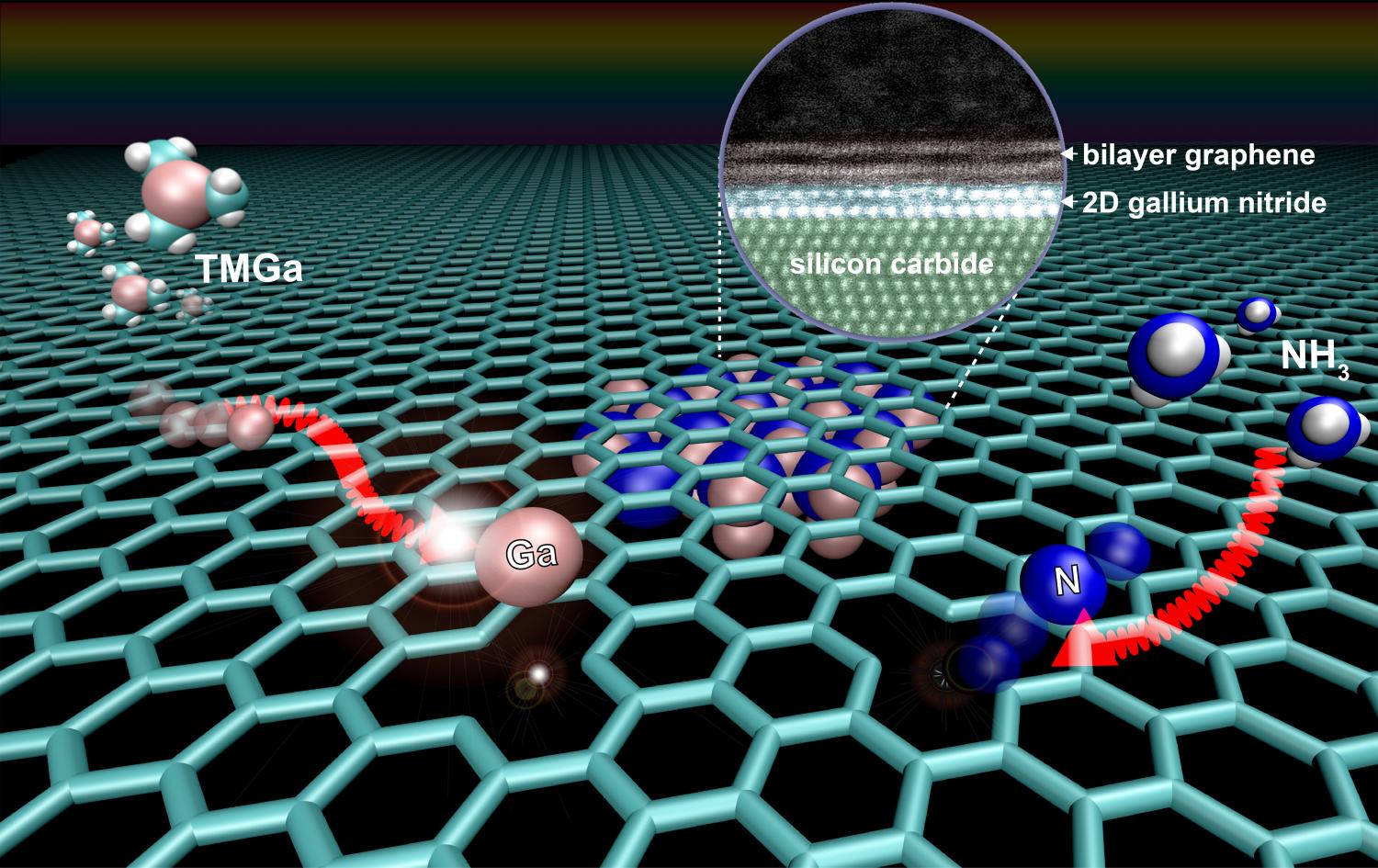 An illustration of the Migration Enhance Encapsulated Growth (MEEG) process to stabilize novel wide-bandgap two-dimensional nitride semiconductors that are not naturally occurring. MEEG is facilitated by defects in the graphene lattice that act as pathways for intercalation. When the gallium and nitrogen adatoms meet at the graphene/SiC interface, they chemically react to form two-dimensional gallium nitride. (Credit: Z. Al Balushi and Stephen Weitzner, Penn State MatSE)

A newly discovered method for making two-dimensional materials could lead to new and extraordinary properties, particularly in a class of materials called nitrides, say the Penn State materials scientists who discovered the process. This first-ever growth of two-dimensional gallium nitride using graphene encapsulation could lead to applications in deep ultraviolet lasers, next-generation electronics and sensors.

“These experimental results open up new avenues of research in 2D materials,” said Joshua Robinson, associate professor of materials science and engineering. “This work focuses on making 2D gallium nitride, which has never been done before.”

Gallium nitride in its three-dimensional form is known to be a wide-bandgap semiconductor. Wide-bandgap semiconductors are important for high frequency, high power applications. When grown in its two-dimensional form, gallium nitride transforms from a wide-bandgap material to an ultrawide-bandgap material, effectively tripling the energy spectrum it can operate in, including the whole ultraviolet, visible and infrared spectrum. This work will have a particular impact on electro-optic devices that manipulate and transmit light.

“We have this palette of naturally occurring 2D materials,” he added. “But to expand beyond this, we have to synthesize materials that do not exist in nature. Typically, new material systems are highly unstable. But our growth method, called Migration Enhanced Encapsulated Growth (MEEG), uses a layer of graphene to assist the growth and stabilize a robust structure of 2D gallium nitride.”

The graphene is grown on a substrate of silicon carbide, which is a technologically important substrate used widely in industry for LEDs, radar and telecommunications. When heated, the silicon on the surface decomposes and leaves a carbon-rich surface that can reconstruct into graphene. The advantage of producing the graphene in this way is that the interface where the two materials meet is perfectly smooth.

Robinson believes that in the case of two-dimensional gallium nitride, the addition of a layer of graphene makes all the difference. Graphene, a one-atom-thick layer of carbon atoms, is known for its remarkable electronic properties and strength.

“It’s the key,” Robinson said. “If you try to grow these materials the traditional way, on silicon carbide, you normally just form islands. It doesn’t grow in nice layers on the silicon carbide.”

When gallium atoms are added to the mix, they migrate through the graphene and form the middle layer of a sandwich, with graphene floating on top. When nitrogen atoms are added, a chemical reaction takes place that turns the gallium and nitrogen into gallium nitride.

“The MEEG process not only produces ultra-thin sheets of gallium nitride but also changes the crystal structure of the material, which may lead to entirely new applications in electronics and optoelectronics,” said Redwing.