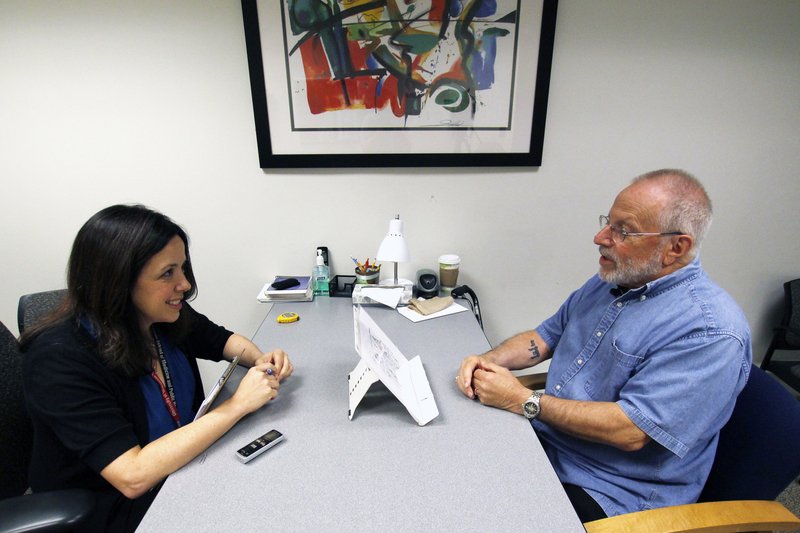 In this July 6, 2017 photo, Kim Mueller, left, administers a test to Alan Sweet, where he describes an illustration, as part of a University of Wisconsin-Madison study on dementia. The study found that for some people subtle changes in everyday speech can be correlated with early mild cognitive impairment, which can be a precursor to Alzheimer’s. (AP Photo/Carrie Antlfinger)

Your speech may, um, help reveal if you’re uh … developing thinking problems. More pauses, filler words and other verbal changes might be an early sign of mental decline, which can lead to Alzheimer’s disease, a study suggests.

Researchers had people describe a picture they were shown in taped sessions two years apart. Those with early-stage mild cognitive impairment slid much faster on certain verbal skills than those who didn’t develop thinking problems.

“What we’ve discovered here is there are aspects of language that are affected earlier than we thought,” before or at the same time that memory problems emerge, said one study leader, Sterling Johnson of the University of Wisconsin-Madison.

This was the largest study ever done of speech analysis for this purpose, and if more testing confirms its value, it might offer a simple, cheap way to help screen people for very early signs of mental decline.

Don’t panic: Lots of people say “um” and have trouble quickly recalling names as they age, and that doesn’t mean trouble is on the way.

“In normal aging, it’s something that may come back to you later and it’s not going to disrupt the whole conversation,” another study leader, Kimberly Mueller, explained. “The difference here is, it is more frequent in a short period,” interferes with communication and gets worse over time.

The study was discussed Monday at the Alzheimer’s Association International Conference in London.

About 47 million people worldwide have dementia, and Alzheimer’s is the most common type. In the U.S., about 5.5 million people have the disease. Current drugs can’t slow or reverse it, just ease symptoms. Doctors think treatment might need to start sooner to do any good, so there’s a push to find early signs.

Mild cognitive impairment causes changes that are noticeable to the person or others, but not enough to interfere with daily life. It doesn’t mean these folks will develop Alzheimer’s, but many do – 15 to 20 percent per year.

To see if speech analysis can find early signs, researchers first did the picture-description test on 400 people without cognitive problems and saw no change over time in verbal skills. Next, they tested 264 participants in the Wisconsin Registry for Alzheimer’s Prevention, a long-running study of people in their 50s and 60s, most of whom have a parent with Alzheimer’s and might be at higher risk for the disease themselves. Of those, 64 already had signs of early decline or developed it over the next two years, according to other neurological tests they took.

In the second round of tests , they declined faster on content (ideas they expressed) and fluency (the flow of speech and how many pauses and filler words they used.) They used more pronouns such as “it” or “they” instead of specific names for things, spoke in shorter sentences and took longer to convey what they had to say.

“Those are all indicators of struggling with that computational load that the brain has to conduct” and supports the role of this test to detect decline, said Julie Liss, a speech expert at Arizona State University with no role in the work.

She helped lead a study in 2015 that analyzed dozens of press conferences by former President Ronald Reagan and found evidence of speech changes more than a decade before he was diagnosed with Alzheimer’s. She also co-founded a company that analyzes speech for many neurological problems, including dementia, traumatic brain injury and Parkinson’s disease.

Researchers could not estimate the cost of testing for a single patient, but for a doctor to offer it requires only a digital tape recorder and a computer program or app to analyze results.

Alan Sweet, 72, a retired state of Wisconsin worker who lives in Madison, is taking part in the study and had the speech test earlier this month. His father had Alzheimer’s and his mother had a different type of dementia, Lewy body.

“Watching my parents decline into the awful world of dementia and being responsible for their medical care was the best and worst experience of my life,” he said. “I want to help the researchers learn, furthering medical knowledge of treatment and ultimately, cure.”

Another study at the conference on Monday, led by doctoral student Taylor Fields, hints that hearing loss may be another clue to possible mental decline. It involved 783 people from the same Wisconsin registry project. Those who said at the start of the study that they had been diagnosed with hearing loss were more than twice as likely to develop mild cognitive impairment over the next five years as those who did not start out with a hearing problem.

That sort of information is not strong evidence, but it fits with earlier work along those lines.

Family doctors “can do a lot to help us if they knew what to look for” to catch early signs of decline, said Maria Carrillo, the Alzheimer’s Association’s chief science officer. Hearing loss, verbal changes and other known risks such as sleep problems might warrant a referral to a neurologist for a dementia check, she said.