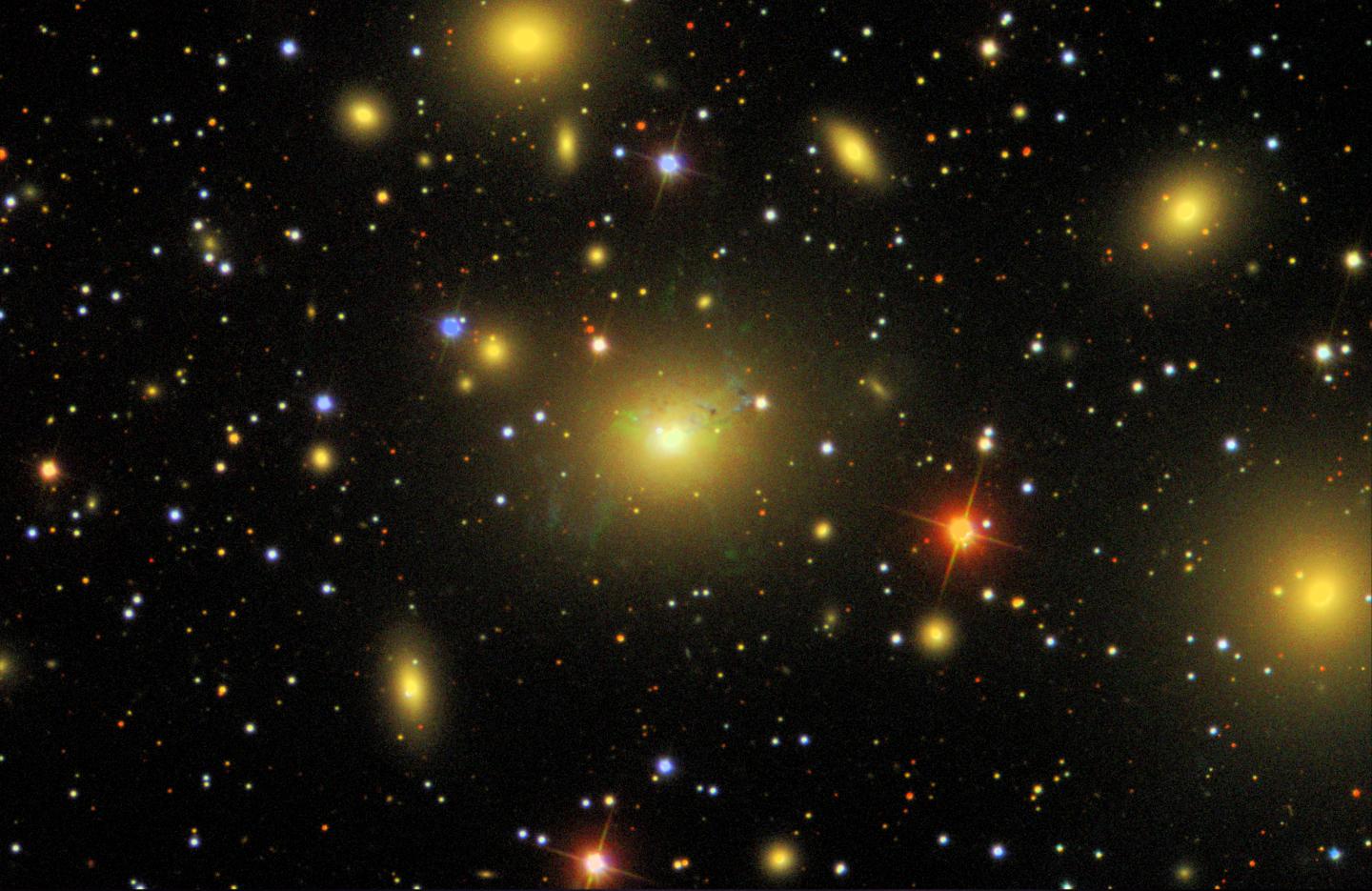 Before its brief mission ended unexpectedly in March 2016, Japan’s Hitomi X-ray observatory captured exceptional information about the motions of hot gas in the Perseus galaxy cluster. Now, thanks to unprecedented detail provided by an instrument developed jointly by NASA and the Japan Aerospace Exploration Agency (JAXA), scientists have been able to analyze more deeply the chemical make-up of this gas, providing new insights into the stellar explosions that formed most of these elements and cast them into space.

The Perseus cluster, located 240 million light-years away in its namesake constellation, is the brightest galaxy cluster in X-rays and among the most massive near Earth. It contains thousands of galaxies orbiting within a thin hot gas, all bound together by gravity. The gas averages 90 million degrees Fahrenheit (50 million degrees Celsius) and is the source of the cluster’s X-ray emission.

In a paper published online in the journal Nature on Nov. 13, the science team shows that the proportions of elements found in the cluster are nearly identical to what astronomers see in the Sun.

“There was no reason to expect that initially,” said coauthor Michael Loewenstein, a University of Maryland research scientist at NASA’s Goddard Space Flight Center in Greenbelt, Maryland. “The Perseus cluster is a different environment with a different history from our Sun’s. After all, clusters represent an average chemical distribution from many types of stars in many types of galaxies that formed long before the Sun.”

One group of elements is closely tied to a particular class of stellar explosion, called Type Ia supernovas. These blasts are thought to be responsible for producing most of the universe’s chromium, manganese, iron and nickel — metals collectively known as “iron-peak” elements.

Type Ia supernovas entail the total destruction of a white dwarf, a compact remnant produced by stars like the Sun. Although stable on its own, a white dwarf can undergo a runaway thermonuclear explosion if it’s paired with another object as part of a binary system. This occurs either by merging with a companion white dwarf or, when paired with a nearby normal star, by stealing some of partner’s gas. The transferred matter can accumulate on the white dwarf, gradually increasing its mass until it becomes unstable and explodes.

An important open question has been whether the exploding white dwarf is close to this stability limit — about 1.4 solar masses — regardless of its origins. Different masses produce different amounts of iron-peak metals, so a detailed tally of these elements over a large region of space, like the Perseus galaxy cluster, could indicate which kinds of white dwarfs blew up more often.

“It turns out you need a combination of Type Ia supernovas with different masses at the moment of the explosion to produce the chemical abundances we see in the gas at the middle of the Perseus cluster,” said Hiroya Yamaguchi, the paper’s lead author and a UMD research scientist at Goddard. “We confirm that at least about half of Type Ia supernovas must have reached nearly 1.4 solar masses.”

Taken together, the findings suggest that the same combination of Type Ia supernovas producing iron-peak elements in our solar system also produced these metals in the cluster’s gas. This means both the solar system and the Perseus cluster experienced broadly similar chemical evolution, suggesting that the processes forming stars — and the systems that became Type Ia supernovas — were comparable in both locations.

“Although this is just one example, there’s no reason to doubt that this similarity could extend beyond our Sun and the Perseus cluster to other galaxies with different properties,” said coauthor Kyoko Matsushita, a professor of physics at the Tokyo University of Science.

Although short-lived, the Hitomi mission and its revolutionary SXS instrument –developed and built by Goddard scientists working closely with colleagues from several institutions in the United States, Japan and the Netherlands — have demonstrated the promise of high-resolution X-ray spectrometry.

“Hitomi has permitted us to delve deeper into the history of one of the largest structures in the universe, the Perseus galaxy cluster, and explore how particles and materials behave in the extreme conditions there,” said Goddard’s Richard Kelley, the U.S. principal investigator for the Hitomi collaboration. “Our most recent calculations have provided a glimpse into how and why certain chemical elements are distributed throughout galaxies beyond our own.”

JAXA and NASA scientists are now working to regain the science capabilities lost in the Hitomi mishap by collaborating on the X-ray Astronomy Recovery Mission (XARM), expected to launch in 2021. One of its instruments will have capabilities similar to the SXS flown on Hitomi.

Hitomi launched on Feb. 17, 2016, and suffered a mission-ending spacecraft anomaly 38 days later. Hitomi, which translates to “pupil of the eye,” was known before launch as ASTRO-H. The mission was developed by the Institute of Space and Astronautical Science, a division of JAXA. It was built jointly by an international collaboration led by JAXA, with contributions from Goddard and other institutions in the United States, Japan, Canada and Europe.