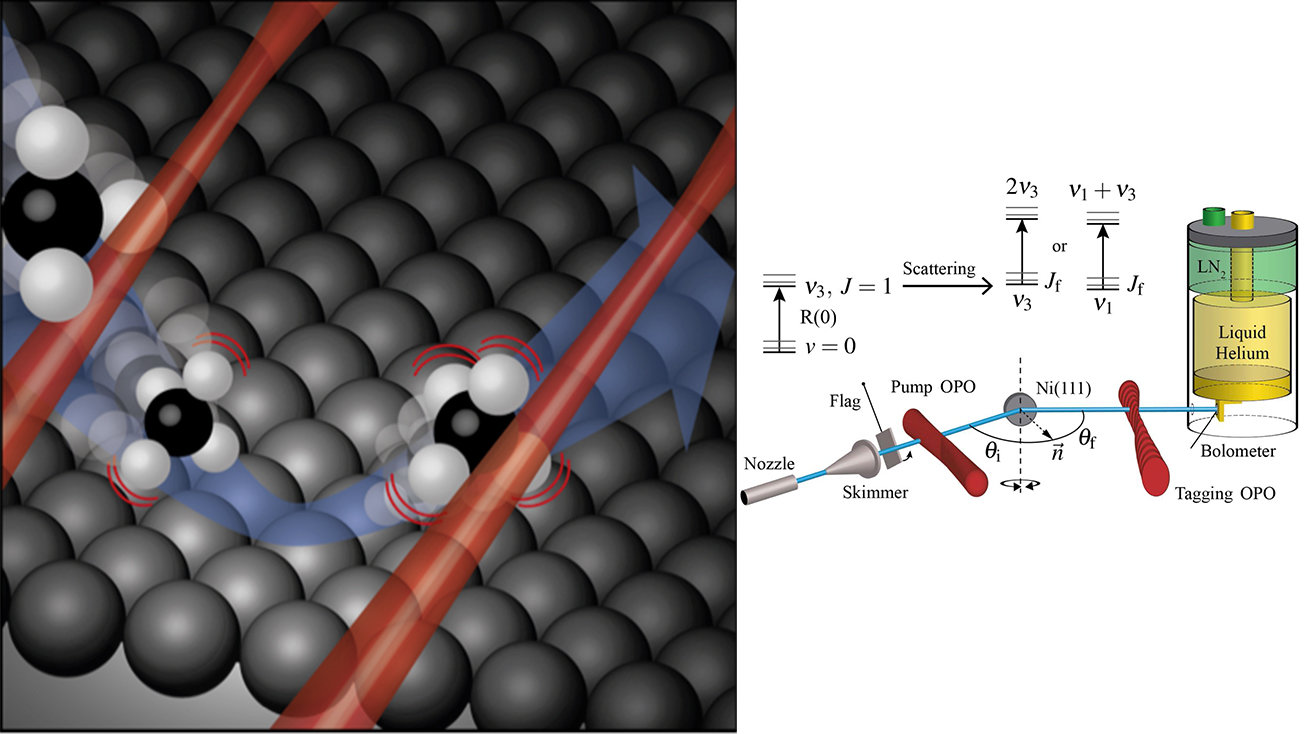 Illustration of methane scattering from a Ni(111) surface (left) and a diagram of the experimental setup used in this study (right). Credit: Rainer Beck/EPFL

When molecules interact with solid surfaces, a whole range of dynamic processes can take place. These are of enormous interest in the context of catalytic reactions, e.g. the conversion of natural gas into hydrogen that can then be used to generate clean electricity.

Specifically, the interaction of methane molecules with catalyst surface such as nickel is of interest if we are to gain a detailed and meaningful understanding of the process on a molecular level. But studying scattering dynamics of polyatomic molecules such as methane has been challenging because current detection techniques are unable to resolve all the quantum states of the scattered molecules.

The lab of Rainer Beck at EPFL has now used novel infrared laser techniques to study methane scattering on a nickel surface for the first time with full quantum-state resolution. Quantum-state resolved techniques have contributed much to our understanding of surface-scattering dynamics, but the innovation here was that the EPFL team was able to extend such studies to methane by combining infrared lasers with a cryogenic bolometer: a highly sensitive heat detector cooled to 1.8 K that can pick up the kinetic and internal energy of the incoming methane molecules.

In their experiments, a powerful infrared laser first pumps the incident methane molecules into a single selected, vibrationally excited quantum state. A second laser combined with the bolometer is then used to analyze the quantum state distribution of the scattered molecules. With this approach, the scientists observed, for the first time, a highly efficient mechanism for vibrational energy redistribution during surface scattering.

The data from the study will allow state-of-the-art quantum theories for molecule/surface scattering to be tested stringently. Meanwhile, the new laser tagging technique introduced in this work is widely applicable and can be used to study many other polyatomic molecule/surface systems with unprecedented detail.