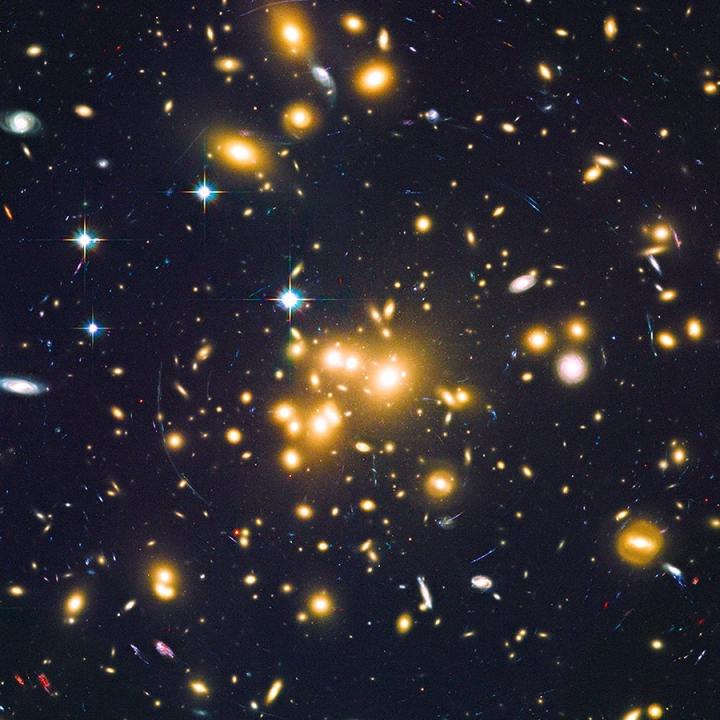 Massive cluster of galaxies Abell 1689 creates a strong gravitational effect on background and older galaxies, seen as arcs of light. Source: NASA, ESA, B. Siana, and A. Alavi

A team of researchers, led by University of California, Riverside astronomers, found for the first time a large population of distant dwarf galaxies that could reveal important details about a productive period of star formation in the universe billions of years ago.

The findings, just published in The Astrophysical Journal, build on a growing body of knowledge about dwarf galaxies, the smallest and dimmest galaxies in the universe. Though diminutive, they are incredibly important for understanding the history of the universe.

It is believed that dwarf galaxies played a significant role during the reionization era in transforming the early universe from being dark, neutral and opaque to one that is bright, ionized and transparent.

Despite their importance, distant dwarf galaxies remain elusive, because they are extremely faint and beyond the reach of even the best telescopes. This means that the current picture of the early universe is not complete.

However, there is a way around this limitation. As predicted by Einstein’s general theory of relativity, a massive object such as a galaxy located along the line of sight to another distant object, can act as a natural lens, magnifying the light coming from that background source.

This phenomenon, known as gravitational lensing, causes the background object to appear brighter and larger. Therefore, these natural telescopes can allow us to discover unseen distant dwarf galaxies.

As a proof of concept, in 2014, the UC Riverside team, including Brian Siana, an assistant professor in UC Riverside’s Department of Physics and Astronomy who is the principal investigator of the observing programs, targeted one cluster of galaxies that produce the gravitational lensing effect and got a glimpse of what appeared to be a large population of distant dwarf galaxies.

The just-published paper, whose lead author was Anahita Alavi, a post-doctoral scholar working with Siana, builds on that work.

The team used the Wide Field Camera 3 on the Hubble Space Telescope to take deep images of three clusters of galaxies. They found the large population of distant dwarf galaxies from when the universe was between two to six billion years old. This cosmic time is critical as it is the most productive time for star formation in the universe.

In addition, the team took advantage of the spectroscopic data from Multi-Object Spectrograph for Infrared Exploration (MOSFIRE) on the W.M. Keck Observatory, to confirm that the galaxies belonged to this important cosmic period.

These dwarf galaxies are 10 to 100 times fainter than galaxies that have been previously observed during these periods of time. Though faint, these galaxies are far more numerous than their brighter counterparts.

This study demonstrates that the number of these dwarf galaxies evolves during this important time period such that they are even more abundant at earlier times. Therefore, the researchers unveiled a population of dwarf galaxies that are the most numerous galaxies in the universe during these time periods.

Despite their faintness, these dwarf galaxies produce more than half of the ultraviolet light during this era. As ultraviolet radiation is produced by young hot stars, dwarf galaxies host a significant fraction of newly-formed stars at these cosmic times.

These results suggest that dwarf galaxies played a prominent role in the reionization era. These galaxies will be the primary targets of the next generation of telescopes, particularly the James Webb Space Telescope, scheduled to launch in October 2018.