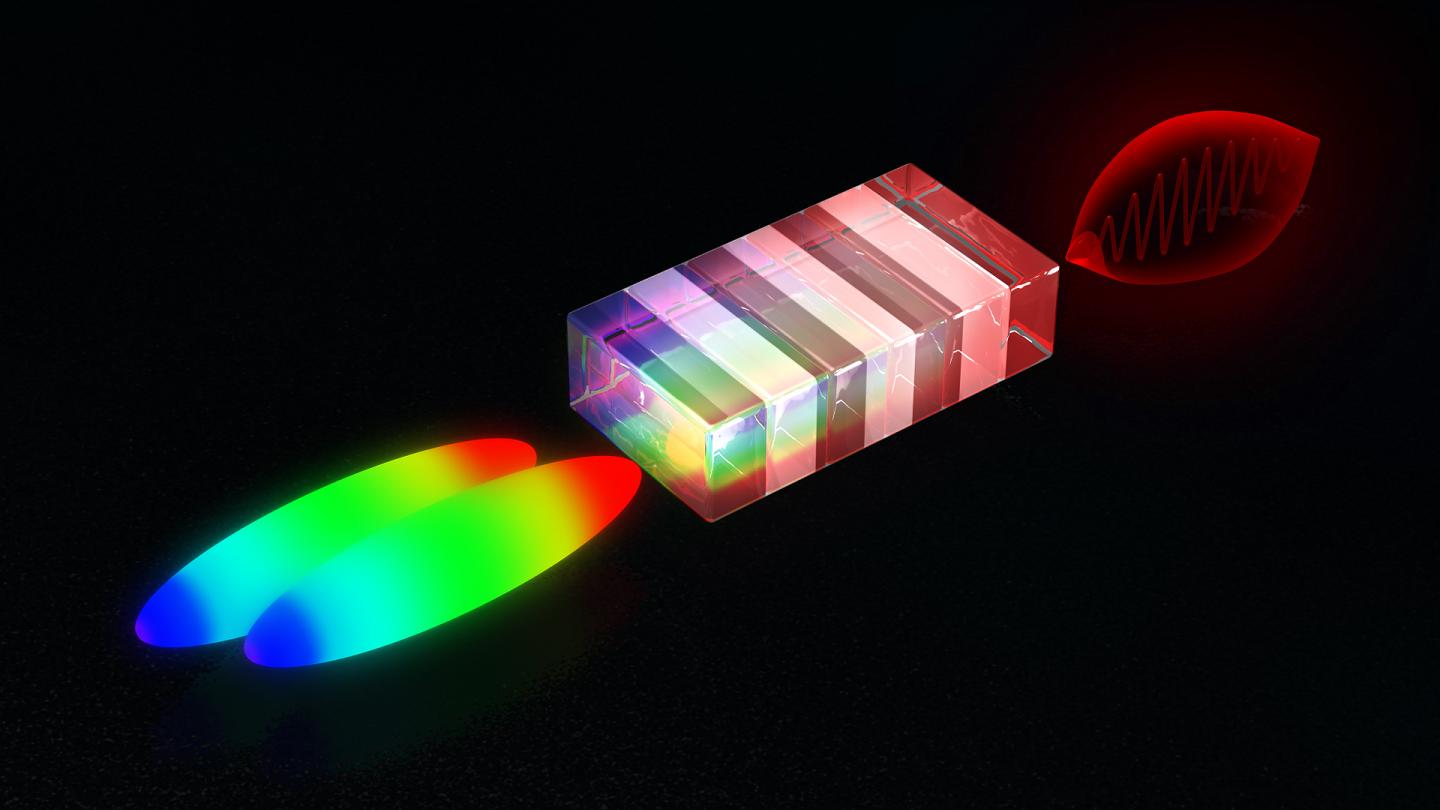 A team of scientists from DESY and the University of Hamburg has achieved an important milestone in the quest for a new type of compact particle accelerator. Using ultra-powerful pulses of laser light, they were able to produce particularly high-energy flashes of radiation in the terahertz range having a sharply defined wavelength (colour). Terahertz radiation is to open the way for a new generation of compact particle accelerators that will find room on a lab bench. The team headed by Andreas Maier and Franz Kärtner from the Hamburg Center for Free-Electron Laser Science (CFEL) is presenting its findings in the journal Nature Communications. CFEL is jointly run by DESY, the University of Hamburg and the Max Planck Society.

The terahertz range of electromagnetic radiation lies between the infrared and microwave frequencies. Air travellers may be familiar with terahertz radiation from the full-body scanners used by airport security to search for objects hidden beneath a person’s garments. However, radiation in this frequency range might also be used to build compact particle accelerators. “The wavelength of terahertz radiation is about a thousand times shorter than the radio waves that are currently used to accelerate particles,” says Kärtner, who is a lead scientist at DESY. “This means that the components of the accelerator can also be built to be around a thousand times smaller.” The generation of high-energy terahertz pulses is therefore also an important step for the AXSIS (frontiers in Attosecond X-ray Science: Imaging and Spectroscopy) project at CFEL, funded by the European Research Council (ERC), which aims to open up completely new applications with compact terahertz particle accelerators.

However, chivvying along an appreciable number of particles calls for powerful pulses of terahertz radiation having a sharply defined wavelength. This is precisely what the team has now managed to create. “In order to generate terahertz pulses, we fire two powerful pulses of laser light into a so-called non-linear crystal, with a minimal time delay between the two,” explains Maier from the University of Hamburg. The two laser pulses have a kind of colour gradient, meaning that the colour at the front of the pulse is different from that at the back. The slight time shift between the two pulses therefore leads to a slight difference in colour. “This difference lies precisely in the terahertz range,” says Maier. “The crystal converts the difference in colour into a terahertz pulse.”

The method requires the two laser pulses to be precisely synchronised. The scientists achieve this by splitting a single pulse into two parts and sending one of them on a short detour so that it is slightly delayed before the two pulses are eventually superimposed again. However, the colour gradient along the pulses is not constant, in other words the colour does not change uniformly along the length of the pulse. Instead, the colour changes slowly at first, and then more and more quickly, producing a curved outline. As a result, the colour difference between the two staggered pulses is not constant. The difference is only appropriate for producing terahertz radiation over a narrow stretch of the pulse.

“That was a big obstacle towards creating high-energy terahertz pulses,” as Maier reports. “Because straightening the colour gradient of the pulses, which would have been the obvious solution, is not easy to do in practice.” It was co-author Nicholas Matlis who came up with the crucial idea: he suggested that the colour profile of just one of the two partial pulses should be stretched slightly along the time axis. While this still does not alter the degree with which the colour changes along the pulse, the colour difference with respect to the other partial pulse now remains constant at all times. “The changes that need to be made to one of the pulses are minimal and surprisingly easy to achieve: all that was necessary was to insert a short length of a special glass into the beam,” reports Maier. “All of a sudden, the terahertz signal became stronger by a factor of 13.” In addition, the scientists used a particularly large non-linear crystal to produce the terahertz radiation, specially made for them by the Japanese Institute for Molecular Science in Okazaki.