In a pioneering effort to control, measure and understand magnetism at the atomic level, researchers working at the National Institute of Standards and Technology (NIST) have discovered a new method for manipulating the nanoscale properties of magnetic materials.

The ability to control these properties has potential applications in creating and improving the magnetic memory in consumer electronic devices, and developing a sensitive detector for magnetic nanoparticles.

A team led by NIST researcher Samuel Stavis and Andrew Balk, now at the Los Alamos National Laboratory, found a way to control the direction of this twist in a film of cobalt just three atomic layers thick. Moreover, they could set this direction to be different at different locations on the same film of cobalt, and do so independently from other magnetic properties of the metal.

The team achieved this new capability by controlling an effect known as the Dzyaloshinskii-Moriya interaction (DMI), which imposes a preferred twist direction on spins. The DMI typically occurs at the boundary between a thin film of a magnetic metal and a nonmagnetic metal layer. The electron spins in the magnetic film interact with atoms in the nonmagnetic film, creating a preferential twist. 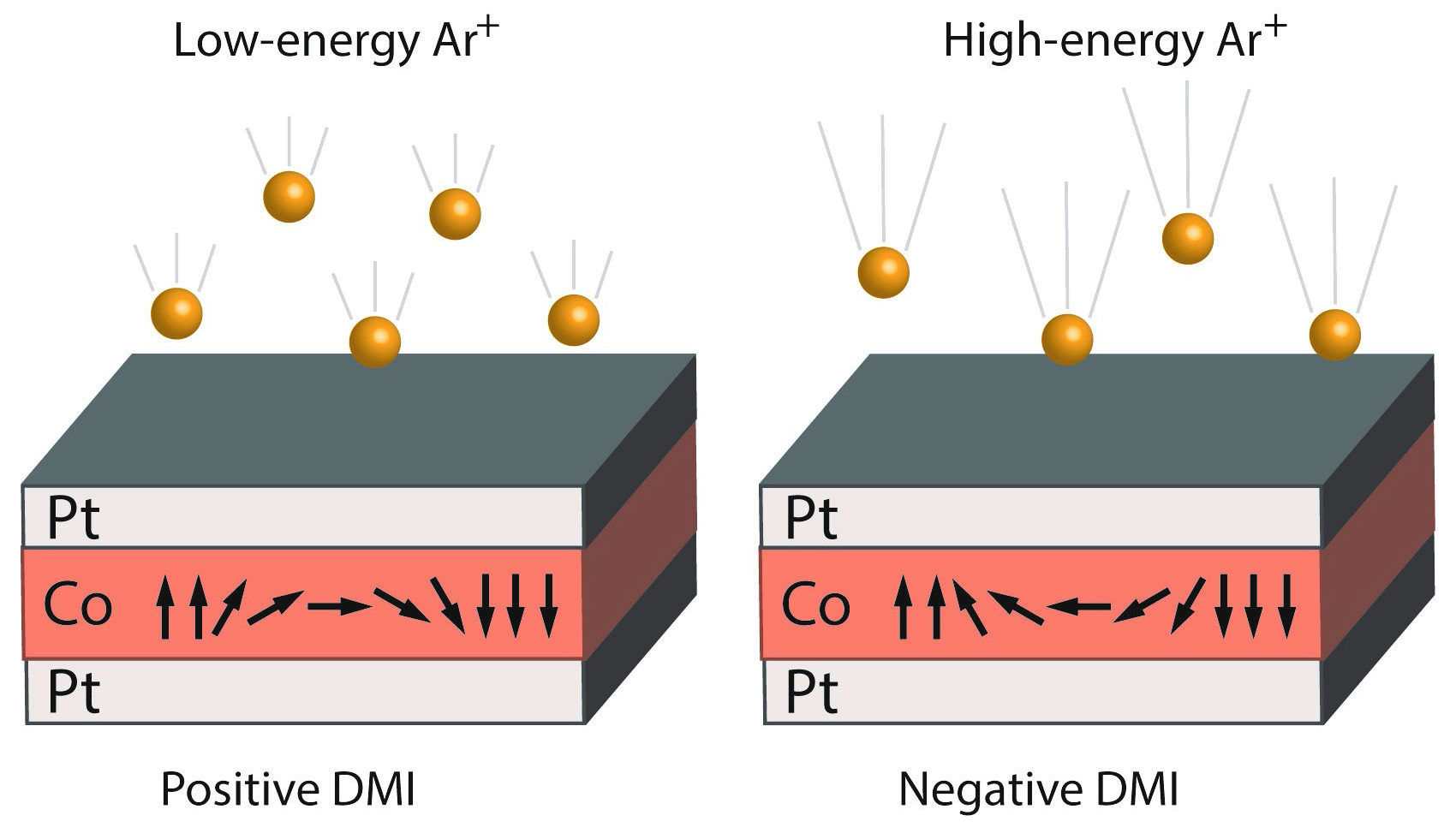 Schematic shows how different energies of argon (Ar) ions bombarding a thin film of cobalt (Co) sandwiched between platinum (Pt) layers can twist or rotate the spin of electrons in a particular direction, by controlling an effect known as the Dzyaloshinskii-Moriya interaction (DMI). Image: NIST

Controlling the DMI can boost magnetic memory, which uses the orientation of spin to store information. A memory device needs two distinct states, representing either a one or a zero — in the case of a magnetic hard drive, electrons with spin pointing up or down. To write data, designers need a predictable way to flip from one spin orientation to the other. Controlling the direction and amount of twist could allow the spin flip to happen more efficiently and reliably than if the twist were random, Balk notes.

Controlling the DMI also plays a key role in another type of magnetic memory. If the DMI is strong enough, it will twist neighboring spins into a circular vortex pattern, and could potentially create exotic magnetic knots called skyrmions. These particle-like knots can store information, and their existence or absence in a magnetic thin film could act much like the ones and zeros of electronic logic circuits. By regulating the DMI, researchers can create skyrmions, which would require less power to operate than other types of magnetic memory, and should be able to guide their motion through a magnetic material.

The researchers describe their work in Physical Review Letters.

In their experiment, the researchers sandwiched a thin film of cobalt between two layers of platinum, a nonmagnetic metal. They then bombarded the trilayer with argon ions, which blasted away the top platinum film and roughened the top boundary between platinum and cobalt, depending on the ion energy. The scientists discovered that when they used argon ions with higher energy, the DMI was negative, twisting the spins of the cobalt counterclockwise, and when they used argon ions with lower energy, the DMI was positive, and would twist the spins in the clockwise direction. When exposed to argon ions of intermediate energy, the DMI was zero, making it equally likely that spins would twist clockwise or counterclockwise.

The researchers made their discovery while tuning the magnetic properties of a cobalt film to develop a sensor for magnetic nanoparticles. In doing so, the team realized it had found a new way to manipulate the DMI.

Because argon ions with different energies could be aimed at specific regions within the cobalt, the researchers were able to fabricate cobalt films whose DMI varied across the surface of the material.

“Six decades after Dzyaloshinskii and Moriya discovered this interaction, our new process to control it spatially, independently from other magnetic properties, will allow new scientific studies of the DMI and enable fabrication of new nanomagnetic devices,” Balk says.

Finally, the scientists found that controlling the DMI did indeed make the film more sensitive to magnetic fields from nanoparticles. At a later date, the team plans to publish work on applying the film as a nanoparticle sensor for users of the NIST Center for Nanoscale Science and Technology, where the work was performed. Several members of the collaboration are also affiliated with the Maryland NanoCenter at the University of Maryland.