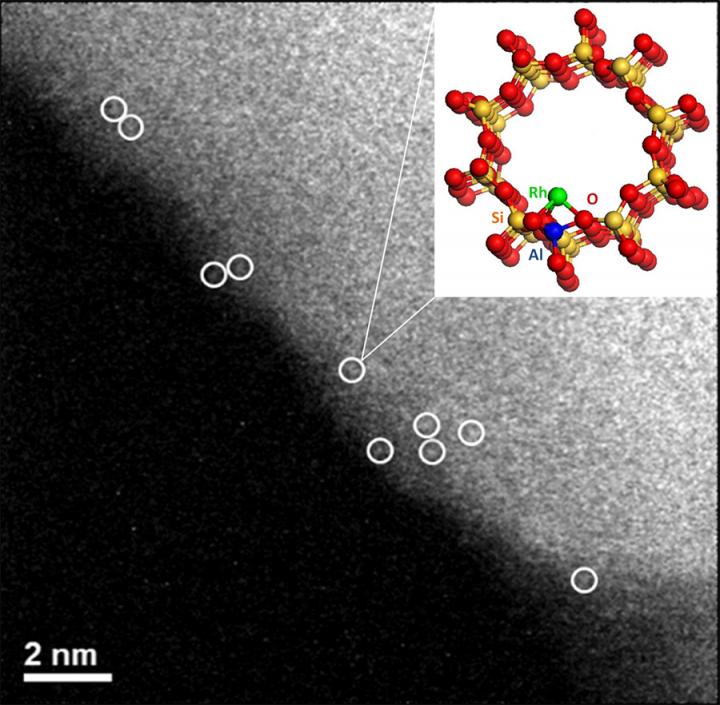 Scientists hoping to develop new energy resources have long pursued the goal of directly converting methane, a simple and abundant chemical found in natural gas, into a usable fuel such as methanol. Until now, scientists have required expensive-to-generate high temperatures to do this.

In a new study, researchers at the U.S. Department of Energy's (DOE) Argonne National Laboratory, Tufts University and Oak Ridge National Laboratory teamed up to explore the potential of rhodium-based catalysts for this conversion under milder conditions. "Our work shows the potential of rhodium to enable this conversion under 'mild conditions' such as lower temperatures," said Argonne X-ray scientist Sungsik Lee. "Converting methane to methanol under mild conditions could have significant applications and present a breakthrough in catalysis."

"Our work shows the potential of rhodium to enable this conversion under 'mild conditions' such as lower temperatures." - Sungsik Lee, Argonne X-ray scientist

Methanol is a key feedstock for the production of chemicals, some of which are used to make products such as plastics, plywood and paints. Methanol also could potentially fuel vehicles or be reformed to produce high grade hydrogen for fuel cells.

The decades-long interest in finding efficient ways to convert methane to methanol has grown even stronger in recent years thanks to the abundance of methane found in U.S.-based natural gas.

However, the current method for producing methanol from methane involves a multi-step process that is neither efficient nor economical in small-scale applications.

In the study, published in Nature, the researchers developed a new way of converting methane to methanol using rhodium and tested the effectiveness of rhodium catalysts under varying conditions. The catalysts, prepared using relatively simple procedures, were used to better convert methane to methanol and acetic acid using oxygen (O2) and carbon monoxide (CO) under mild conditions.

"The direct conversion of methane to liquid methanol has been an unsolved problem in catalysis," said Lee. "Through the use of various testing facilities, including Argonne's Advanced Photon Source, we were able to provide new insights into the atomic-scale structure of these noble catalysts, which are atomically dispersed rhodium complexes rather than nanoparticles."

In a commentary in Nature, based on the study, Ive Hermans, chemistry professor at the University of Wisconsin-Madison, noted that the research "links homogeneous organometallic chemistry ... with solid-phase (heterogeneous) catalysis, and illustrates the importance of understanding catalysts at the atomic scale."

In the study, the research team suggested that further research and testing will illuminate the mechanism and reaction pathways that will guide new methane conversion catalyst design.

"While our work is still far from commercial application, it may inspire research directions for new methane-converting catalysts," said Lee.