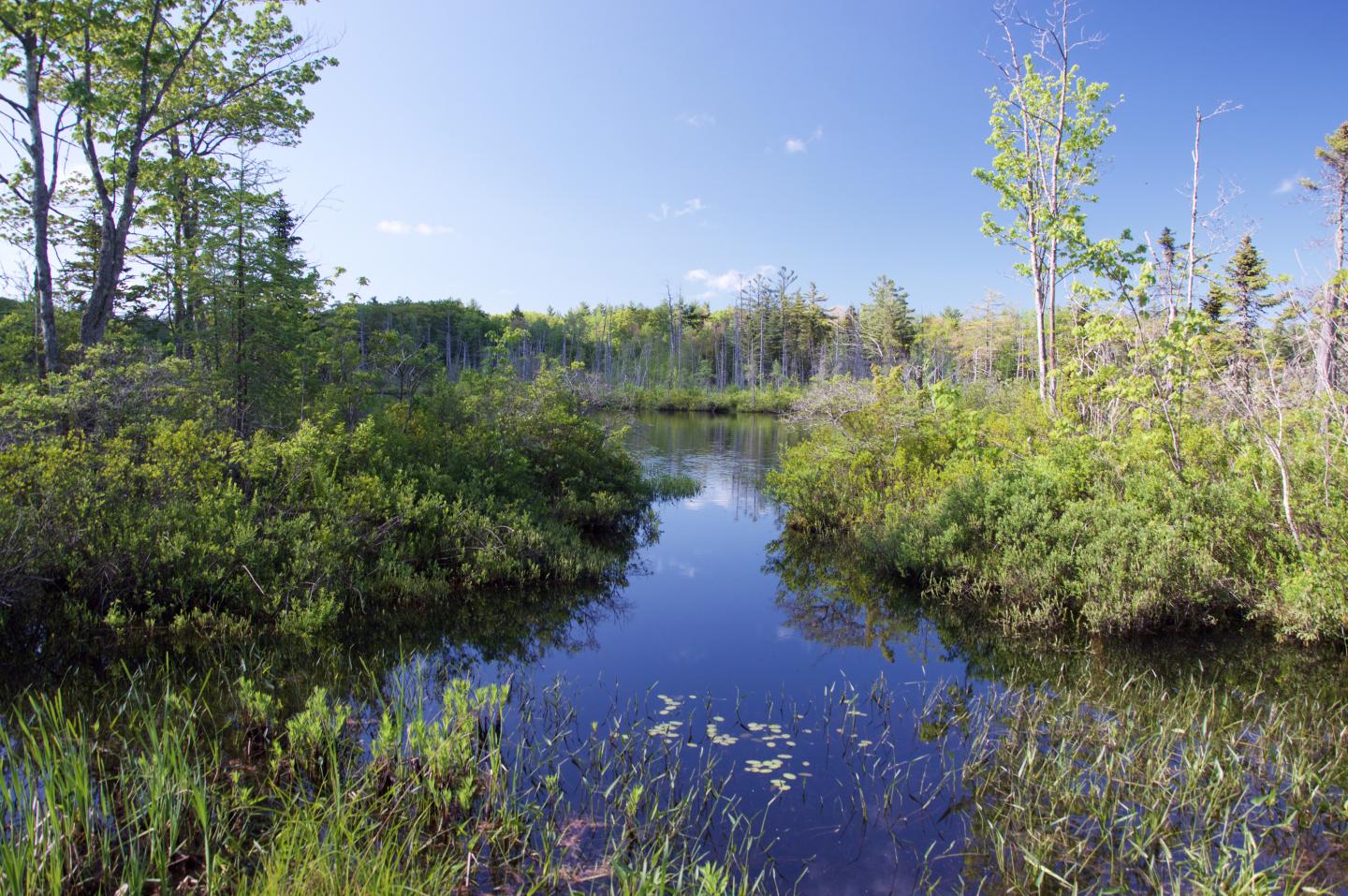 Little Pond, located in Royalston, Mass., was among 642 ponds or lakes in North America and Europe from which fossil pollen was collected to reconstruct temperatures. The reconstructions, which looked at climate in North America and Europe over the past 11,000 years, closely matched the climate simulations run by NCAR, which were conducted independently as part of separate projects. Credit: David Foster

University of Wyoming researchers led a climate study that determined recent temperatures across Europe and North America appear to have few, if any, precedent in the past 11,000 years.

The study revealed important natural fluctuations in climate have occurred over past millennia, which would have naturally led to climatic cooling today in the absence of human activity.

Bryan Shuman, a UW professor in the Department of Geology and Geophysics, and Jeremiah Marsicek, a recent UW Ph.D. graduate in geology and geophysics, led the new study that is highlighted in a paper, titled “Reconciling Divergent Trends and Millennial Variations in Holocene Temperatures,” published today (Jan. 31) in Nature, an international weekly journal of science.

Marsicek, a current postdoctoral researcher at the University of Wisconsin-Madison, was lead author of the paper. He worked on the study from 2011-16. Other contributors to the paper were from the University of Oregon, University of Utah and the U.S. Geological Survey in Corvallis, Ore. The study was largely funded by a combination of fellowships from the Environmental Protection Agency and the UW NASA Space Grant Consortium, and grant support from the National Science Foundation (NSF).

“The major significance here is temperature across two continents over the last 11,000 years. The paper provides a geologically long-term perspective on recent temperature changes in the Northern Hemisphere and the ability of climate models, such as the National Oceanic Atmospheric Administration and National Center for Atmospheric Research (NCAR) models used in the study, to predict the changes,” says Shuman, senior author on the paper and Marsicek’s supervisor. “Climate simulations do a strikingly good job of forecasting the changes.”

“I would say it is significant that temperatures of the most recent decade exceed the warmest temperatures of our reconstruction by 0.5 degrees Fahrenheit, having few — if any — precedents over the last 11,000 years,” Marsicek says. “Additionally, we learned that the climate fluctuates naturally over the last 11,000 years and would have led to cooling today in the absence of human activity.”

The study covers a period that begins at the end of the Ice Age and when there still was an ice sheet covering Canada, Shuman says.

“When we collect sediment from the bottom of the lake, we can recognize sequences of plants that grew in a given area based on the shape of the fossil pollen left behind,” Shuman explains. “Because different plants grow at different temperatures, we can constrain what the temperatures were in a given place at a certain time.”

The reconstructions closely matched the climate simulations run by NCAR, which were conducted independently as part of separate projects. The computer simulations later became part of the study.

“Our temperature estimates and the NCAR simulations were within one-quarter of one degree Fahrenheit, on average, for the last 11,000 years,” says Shuman, as he pointed to a graph that included a black line for his group’s climate research temperature and a gray line that represents the computer simulations. “I was surprised the computer models did as good of a job as they did as predicting the changes that we estimated.”

Long-term warming, not cooling, defined the Holocene Epoch, which began 12,000 to 11,500 years ago at the close of the Pleistocene Ice Age. The reconstructions indicate that evidence of periods that were significantly warmer than the last decade were limited to a few areas of the North Atlantic that were probably unusual globally. Shuman says results determined that the last decade was roughly 6.5 degrees Fahrenheit warmer today than it was 11,000 years ago. Additionally, the decade was at least one-half degree Fahrenheit warmer today than the warmest periods of that 11,000-year time frame, even counting for uncertainties, Shuman says.

“In the absence of people, the trend would have been cooling,” Shuman says. “It does show that what has happened in the last 30 years — a warming trend — puts us outside of all but the most extreme single years every 500 years since the Ice Age. The last 10 years have, on average, been as warm as a normal one year in 500 warm spell.”

In prior climate change studies, long-term cooling has been difficult to reconcile with known global controls that would have forced warming and climate models that consistently simulate long-term warming. In those studies, marine and coastal temperature records were used. However, certain areas in the oceans could be unusually warm and skew the overall long-term average temperature results of some of those prior studies, Shuman says.

“These results help resolve a divergence in climate trends of the past 2,000 years recorded in marine sediments of the North Atlantic Ocean, compared with those recorded in fossil pollen from the continents of North America and Europe,” says Jonathan Wynn, program director in NSF’s Division of Earth Sciences, which co-funded a portion of the research with NSF’s Division of Environmental Biology. “These new findings help us understand how the global climate system works over scales of decades to millennia and give us a new perspective from the distant past on recent and future climate changes.”