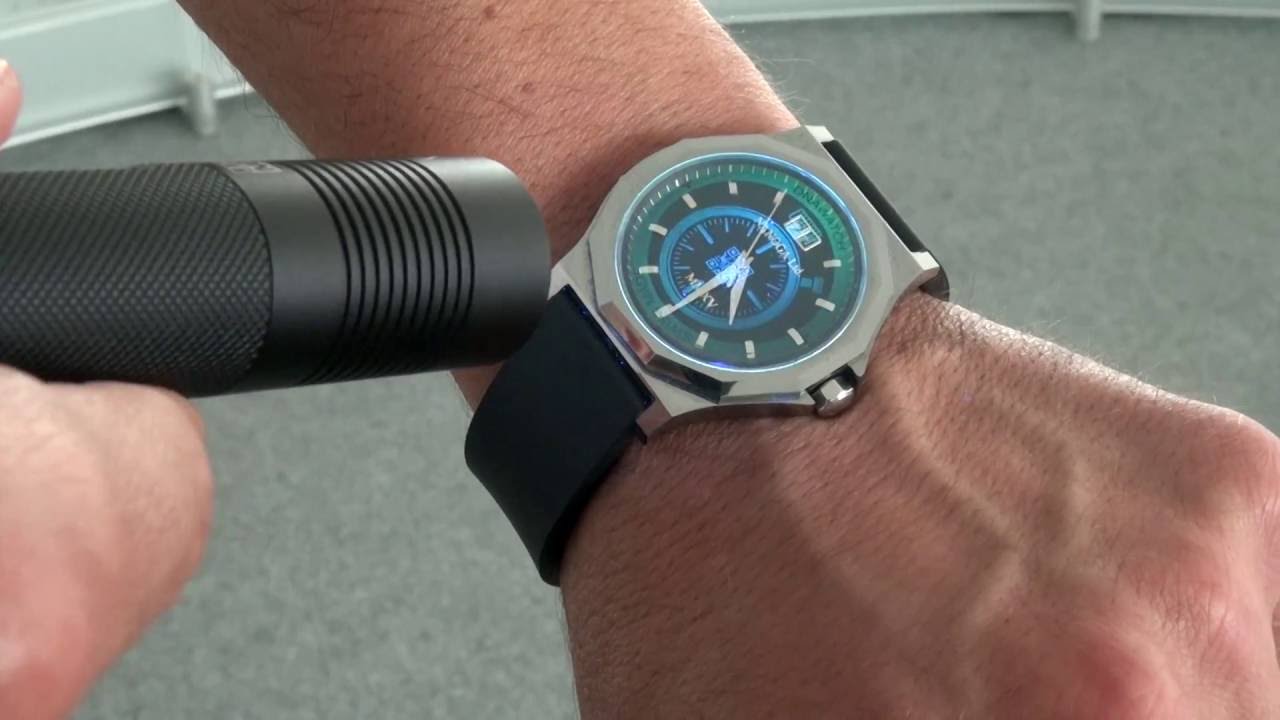 The nano-watermark appears only under ultraviolet light. (Credit: EPFL)

Nanoga, an EPFL-based startup, has developed a technique to put a nanoscopic watermark onto glass or ceramic. Products with this watermark, which is invisible to the naked eye and only shows up under ultraviolet light, are impossible to counterfeit.

With Nanoga’s new way of combatting counterfeits, each product can be made unique without changing its appearance. The technique, which was developed at EPFL, involves an image that is invisible to the naked eye and can only be seen under ultraviolent light. It was initially developed for high-end sapphire crystal watches, but Nanoga has just patented a system of photonic watermarks for glass, ceramic and metal as well.

This technique ensures cutting-edge security: to reproduce this type of nanometric image would be as complicated as trying to forge the Swiss 50-franc note. The process uses expensive machinery and a secret recipe of chemicals that is patent-protected. And the expert’s touch is another essential ingredient. The outcome is a series of layers of atoms that is more than 10,000 times thinner than a hair and does not in any way alter the material’s properties.

In a machine normally used to make LEDs, the substances are deposited onto the surface as a vapor. Using lithographic printing, certain areas are then activated in order to create the watermark. In a form of atomic gymnastics, the atoms that have been activated react when exposed to ultraviolet light, instantly revealing themselves to the human eye.

The lithographic printing is done on a nanoscopic scale, which means that discrete details difficult for the naked eye to read even with the ultraviolent light can be added. And this translates into greater security. A tiny series number that’s no bigger than a grain of sand can, for example, be carefully marked and will be visible only using a very strong magnifying glass.

here are various ways of integrating this technique into the production process. The startup is about to acquire an industrial machine for depositing the nanophotonic layers, which is the most complicated step in the process. Product manufacturers will then be able to provide the glass to be marked with the image in the color of their choice; they’ll then get the glass back, ready for fitting.

Nanoga’s CEO, Nasser Hefyene, is an expert in the fake watch trade. A few years ago, he contacted Nicolas Grandjean, professor at EPFL’s Laboratory of Advanced Semiconductors for Photonics and Electronics. And it was there that he found what he was looking for – anti-counterfeit technology that doesn’t require a high-tech tool to verify a product’s authenticity and that doesn’t change the product’s appearance either. “The aim was to combine tried-and-tested technologies in order to design a new security system that cannot be reproduced,” said Hefyene. The technique, which took two years to develop, is now ready, and Hefyene has been able to generate some initial interest among luxury watchmakers. It’s now just a question of breaking into this very cautious market.