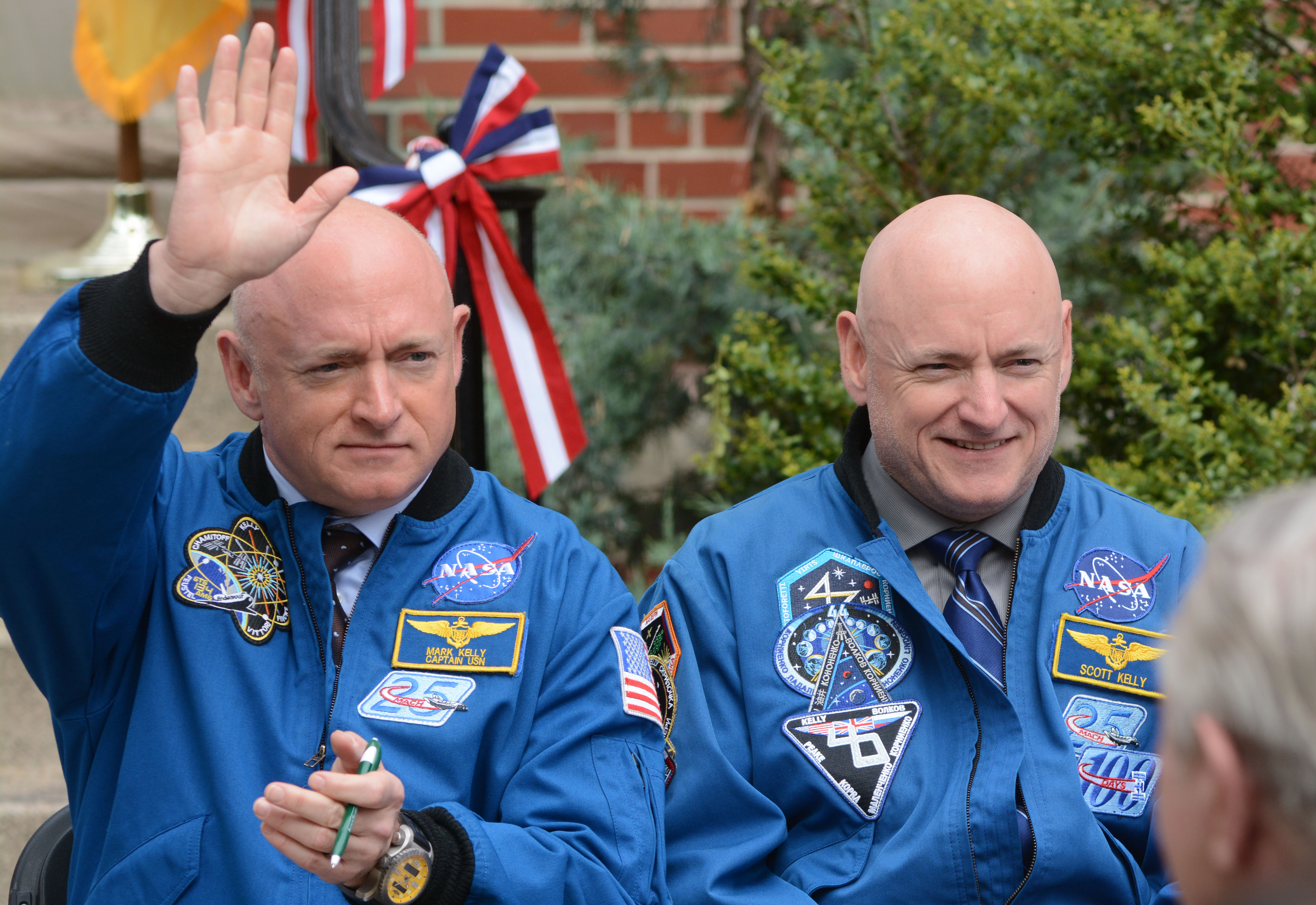 Now retired twin astronauts, Scott and Mark Kelly, are subjects of NASA’s Twins Study. Scott (right) spent a year in space while Mark (left) stayed on Earth as a control subject. Researchers looked at the effects of space travel on the human body. The research is published in Science. Credits: NASA, Derek Storm

For Christopher Mason, PhD—a genomics expert whose lab focuses on survival of the human species on Earth, in space and on other planets—an astronaut with an identical twin is a dream come true.

Mason, an associate professor of Computational Genomics at Weill Cornell Medicine, had previously reached out to NASA in 2010 hoping to gain access to astronaut genomic data, only to find out that little had previously been gathered. So in 2014 when NASA put out the call for research teams to participate in the now-famous Twins Study, Mason jumped at the chance.

“This is really a study that we only have one shot at because the odds of having identical twins again to study in space flight are very rare,” said Mason. “If someone has a different response to anything, a medication, any stress, any sort of life event, if they are different people you can always say, well maybe this happened because we are looking at two genetically different people. If you remove that, it takes away probably one of the biggest confounding variables for any study.”

Mason’s lab was selected as one of ten teams of researchers participating in the study, which evaluated the physiological, molecular and cognitive change in astronaut Scott Kelly as he spent 342 days on the International Space Station (ISS) from 2015 to 2016 while his identical twin retired astronaut Mark Kelly remained on Earth as a control.

While several preliminary results were released earlier, the study moved into its final stages recently, releasing a combined summary paper of all ten teams’ research in the peer-reviewed journal Science on April 12.

The results revealed some interesting, surprising and assuring data of how the human body can adapt to the extreme environment of space. NASA had gained some understanding of what happens to the body after six months aboard the ISS previously, but Scott Kelly’s one-year mission served as a stepping-stone to longer expeditions such as missions to Mars, which could take three years for a round trip.

During the course of the study, data were generated from specimens collected and test protocols administered over 25 months, spanning 19 time points preflight, inflight and postflight with an integrated sampling scheme.

Although average telomere length, global gene expression and microbiome changes returned to near preflight levels within six months after return to Earth, increased numbers of short telomeres were observed and expression of some genes was still disrupted. (For a summary of the full study results, check out this article in our sister publication, Laboratory Equipment.)

So what did we learn from The Twins Study and what further research is needed before humans can safely travel to Mars? R&D Magazine spoke with Mason, who served  as one of the principal investigators on the Twins Study, to find out.

R&D Magazine: What do you see as the key takeaways from the study?

Mason: The biggest takeaway is that there are no flashing red lights, or even solid red lights, that say that we shouldn’t go to Mars, that it is too dangerous. There are however, plenty of yellow lights. For example, we saw some DNA damage, you don’t want that to increase you want that to go down, but that went up. Gene expression was disrupted in the immune system. His cognitive abilities got worse and there was some eye damage; these are some of the things that weren’t necessarily good, but they aren’t show stoppers, we’d still be able to get to Mars and survive and hopefully thrive there. One of the pieces of good news about Mars is it has 36 percent of the gravity (compared to Earth), so whatever the changes and rough features of landing on a planet after spending a year in flight, should be at least not as bad on Mars.

R&D Magazine: Following this study, what questions remain unanswered that you’d like to see addressed first?

Mason: There are both terrestrial and space-based questions that are really key. The first and most important one is just getting greater numbers—a greater sample size. We really want to have the ability to put these changes that we see in Scott and Mark into context, that obviously means more astronauts doing shorter, medium and long-term flights, but also we’ve been collecting a lot more data from people on Earth that has been profiled and monitored longitudinally. The third area is looking at animal models. There is something called NASA Gene Lab which a big repository of mouse data, human cell lines and other things that have gone up into space and been profiled in a similar way. We are looking at everything from every beast on Earth to every human that goes above it to try and monitor it the same way and put a lot of these results into context. How much is Scott an outlier or representative? Where does he fall on the distribution on a mammalian response to space flight? We don’t totally know yet.

R&D Magazine: Can you tell me more about the logistics of monitoring and collecting samples from Scott while he was on the ISS? What sorts of challenges did you face and did you learn anything regarding in-space biological measurements and sample collection that can be applied to future missions?

Mason: We had to create a new protocol for what’s called the ambient blood draw, where we draw blood in space and bring it down back to Earth. That was a new protocol so we could have purified cells and freshly collected cells that were still alive when we got them back to work because a lot of cells, if you freeze them and thaw them they aren’t the same at all, and a lot of them die. That was a new protocol to get fresh blood in your hands that only 36 hours prior had been floating around in space, which is pretty cool. We called that the Ambient Blood Protocol which we worked on with NASA to use for the study. We also demonstrated that you could do sequencing in space for the first time in 2016. We now know that it is possible to actually do sequencing in zero gravity and now there is a DNA sequencer that is on the space station that is part of certified flight hardware that we can use for other grants that we are working on to tackle an infection in space, for example, or if you want to start to do some of the other diagnostics in space you can actually do it right away which is pretty cool, you don’t have to bring things back to Earth.

R&D Magazine: The findings regarding the telomeres (a key indicator of biological age) were interesting. Is there any understanding as to why Scott’s telomeres lengthened in space and then shortened when he returned?

Mason: There are some hypothesis which we outlined in our paper. There are some variables that track with telomere length, one of them is body mass, and we know that actually changes your ability to maintain telomeres. Also T-cells when they get irradiated there is one paper that indicates that, that can maybe lengthen telomeres. We think that it is a combination of exposure to radiation, changes in diet, lifestyle, all coupled together. Some other distribution of other cell types in his body did change as well. We think it is possible that all of these things are in play and we really need to flush them out and look at other astronauts and other animals.

R&D Magazine: Were these findings surprising?

Mason: We were investigating genetic changes and genetic damage plus telomere length and these findings were the exact opposite of what we expected. It was pretty surprising. It was actually one of those great moments in science, the first meeting when were all getting together to present our preliminary results, everyone was like ‘what’ no one believed it! Susan Bailey presented it and we thought maybe there was something weird about the way she extracted the samples or did the PCR (polymerase chain reaction), so I extracted DNA from all of my samples and sent them to her to see if they matched her samples and we got the same result. Then we tried different primers and tried it in multiple different laboratory conditions and replicated it. From a technical perspective we ruled out a lot errors. So it is for sure a real result. Now the question is mechanistically and biologically exactly what happened and why it happened. We just don’t know yet.

R&D Magazine: Besides the telomeres were there any other findings that were really surprising to your team?

Mason: We saw a big spike in mitochondrial DNA in the blood; that was surprising. Some of the gene expression changes were surprising to see that continued during the flight—I was expecting a big burst in the beginning of the flight and then for it to taper off, but we actually saw it continue to increase throughout the mission. That was the opposite of what I expected.

We also expected that Scott would be 99 percent back to normal after six months, but he even said in a press conference recently that he still felt a little bit off so to speak, even eight months after the mission.

R&D Magazine: Is there going to be any addition follow up with Scott or Mark?

Mason: Officially it is finished but we’ve had some ongoing emails about doing additional collections. There are also additional missions being set up with other astronauts. We also have plans to figure out how to work with the other investigators as well and share more data.

R&D Magazine: What’s next for your team?

Mason: We have two more grants to do more sequencing in space and Susan Bailey and I have been chatting a lot about additional work to do on the telomere study. I plan to keep working in this area for the rest of my career if all goes as planned.

I think we are in a new space race. NASA just announced the plan to be back on the moon by 2024 and someone is probably going to be on Mars by 2033, which is not that far away really. So it is a very exciting time. We can do sequencing in space and we are working on doing telomere measurement in space. I think the idea of the molecular assays being so hard to do at a distance will pretty soon be imbedded right at the space station which is pretty cool.

Some people might say oh why does this all matter?  But we use some of the same methods we created for this study to do remote sequencing for Ebola in Sub-Saharan Africa or in all kind of places to do real-time monitoring.

The motto of our lab is if we can do it in space we better be able to do it even faster on Earth.

This interview was edited for length and clarity