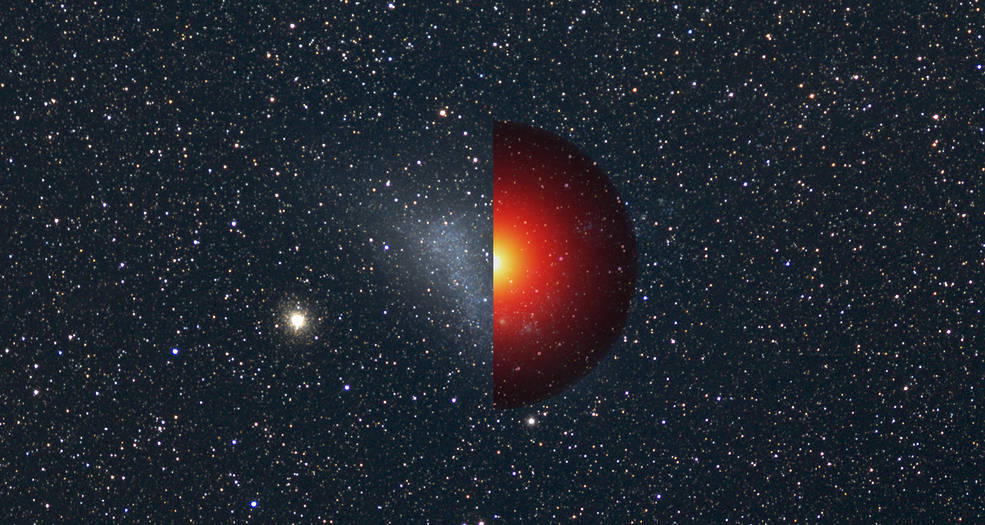 The Small Magellanic Cloud (SMC), at center, is the second-largest satellite galaxy orbiting our own. This image superimposes a photograph of the SMC with one half of a model of its dark matter (right of center). Lighter colors indicate greater density and show a strong concentration toward the galaxy’s center. Ninety-five percent of the dark matter is contained within a circle tracing the outer edge of the model shown. In six years of data, Fermi finds no indication of gamma rays from the SMC’s dark matter. Credits: Dark matter, R. Caputo et al. 2016; background, Axel Mellinger, Central Michigan University

Dark matter, the mysterious substance that constitutes most of the material universe, remains as elusive as ever. Although experiments on the ground and in space have yet to find a trace of dark matter, the results are helping scientists rule out some of the many theoretical possibilities. Three studies published earlier this year, using six or more years of data from NASA’s Fermi Gamma-ray Space Telescope, have broadened the mission’s dark matter hunt using some novel approaches.

“We’ve looked for the usual suspects in the usual places and found no solid signals, so we’ve started searching in some creative new ways,” said Julie McEnery, Fermi project scientist at NASA’s Goddard Space Flight Center in Greenbelt, Maryland. “With these results, Fermi has excluded more candidates, has shown that dark matter can contribute to only a small part of the gamma-ray background beyond our galaxy, the Milky Way, and has produced strong limits for dark matter particles in the second-largest galaxy orbiting it.”

Dark matter neither emits nor absorbs light, primarily interacts with the rest of the universe through gravity, yet accounts for about 80 percent of the matter in the universe. Astronomers see its effects throughout the cosmos — in the rotation of galaxies, in the distortion of light passing through galaxy clusters, and in simulations of the early universe, which require the presence of dark matter to form galaxies at all.

The leading candidates for dark matter are different classes of hypothetical particles. Scientists think gamma rays, the highest-energy form of light, can help reveal the presence of some of types of proposed dark matter particles. Previously, Fermi has searched for tell-tale gamma-ray signals associated with dark matter in the center of our galaxy and in small dwarf galaxies orbiting our own. Although no convincing signals were found, these results eliminated candidates within a specific range of masses and interaction rates, further limiting the possible characteristics of dark matter particles.

Among the new studies, the most exotic scenario investigated was the possibility that dark matter might consist of hypothetical particles called axions or other particles with similar properties. An intriguing aspect of axion-like particles is their ability to convert into gamma rays and back again when they interact with strong magnetic fields. These conversions would leave behind characteristic traces, like gaps or steps, in the spectrum of a bright gamma-ray source.

Manuel Meyer at Stockholm University led a study to search for these effects in the gamma rays from NGC 1275, the central galaxy of the Perseus galaxy cluster, located about 240 million light-years away. High-energy emissions from NGC 1275 are thought to be associated with a supermassive black hole at its center. Like all galaxy clusters, the Perseus cluster is filled with hot gas threaded with magnetic fields, which would enable the switch between gamma rays and axion-like particles. This means some of the gamma rays coming from NGC 1275 could convert into axions — and potentially back again — as they make their way to us.

Meyer’s team collected observations from Fermi’s Large Area Telescope (LAT) and searched for predicted distortions in the gamma-ray signal. The findings, published April 20 in Physical Review Letters, exclude a small range of axion-like particles that could have comprised about 4 percent of dark matter.

“While we don’t yet know what dark matter is, our results show we can probe axion-like models and provide the strongest constraints to date for certain masses,” Meyer said. “Remarkably, we reached a sensitivity we thought would only be possible in a dedicated laboratory experiment, which is quite a testament to Fermi.”

Another broad class of dark matter candidates are called Weakly Interacting Massive Particles (WIMPs). In some versions, colliding WIMPs either mutually annihilate or produce an intermediate, quickly decaying particle. Both scenarios result in gamma rays that can be detected by the LAT.

Regina Caputo at the University of California, Santa Cruz, sought these signals from the Small Magellanic Cloud (SMC), which is located about 200,000 light-years away and is the second-largest of the small satellite galaxies orbiting the Milky Way. Part of the SMC’s appeal for a dark matter search is that it lies comparatively close to us and its gamma-ray emission from conventional sources, like star formation and pulsars, is well understood. Most importantly, astronomers have high-precision measurements of the SMC’s rotation curve, which shows how its rotational speed changes with distance from its center and indicates how much dark matter is present. In a paper published in Physical Review D on March 22, Caputo and her colleagues modeled the dark matter content of the SMC, showing it possessed enough to produce detectable signals for two WIMP types.

“The LAT definitely sees gamma rays from the SMC, but we can explain them all through conventional sources,” Caputo said. “No signal from dark matter annihilation was found to be statistically significant.”

In the third study, researchers led by Marco Ajello at Clemson University in South Carolina and Mattia Di Mauro at SLAC National Accelerator Laboratory in California took the search in a different direction. Instead of looking at specific astronomical targets, the team used more than 6.5 years of LAT data to analyze the background glow of gamma rays seen all over the sky.

The nature of this light, called the extragalactic gamma-ray background (EGB) has been debated since it was first measured by NASA’s Small Astronomy Satellite 2 in the early 1970s. Fermi has shown that much of this light arises from unresolved gamma-ray sources, particularly galaxies called blazars, which are powered by material falling toward gigantic black holes. Blazars constitute more than half of the total gamma-ray sources seen by Fermi, and they make up an even greater share in a new LAT catalog of the highest-energy gamma rays.

Some models predict that EGB gamma rays could arise from distant interactions of dark matter particles, such as the annihilation or decay of WIMPs. In a detailed analysis of high-energy EGB gamma rays, published April 14 in Physical Review Letters, Ajello and his team show that blazars and other discrete sources can account for nearly all of this emission.

“There is very little room left for signals from exotic sources in the extragalactic gamma-ray background, which in turn means that any contribution from these sources must be quite small,” Ajello said. “This information may help us place limits on how often WIMP particles collide or decay.”

Although these latest studies have come up empty-handed, the quest to find dark matter continues both in space and in ground-based experiments. Fermi is joined in its search by NASA’s Alpha Magnetic Spectrometer, a particle detector on the International Space Station.